Gianni Forte scored four goals and helped the Blue Devils control the ball in the last six minutes as the Huntington girls’ lacrosse team rallied for a 7-6 victory at Connetquot in the final game of the regular season.

The Blue Devils were outplayed in the opening minutes and trailed before a late first half rally tied the game at 4-4. Huntington fell behind again, 6-5 before staging a second rally to regain the lead and hold on for the win.

Forte led the Blue Devils’ efforts to keep the ball away from Connetquot during the final six minutes and seal Huntington’s ninth victory of the regular season. 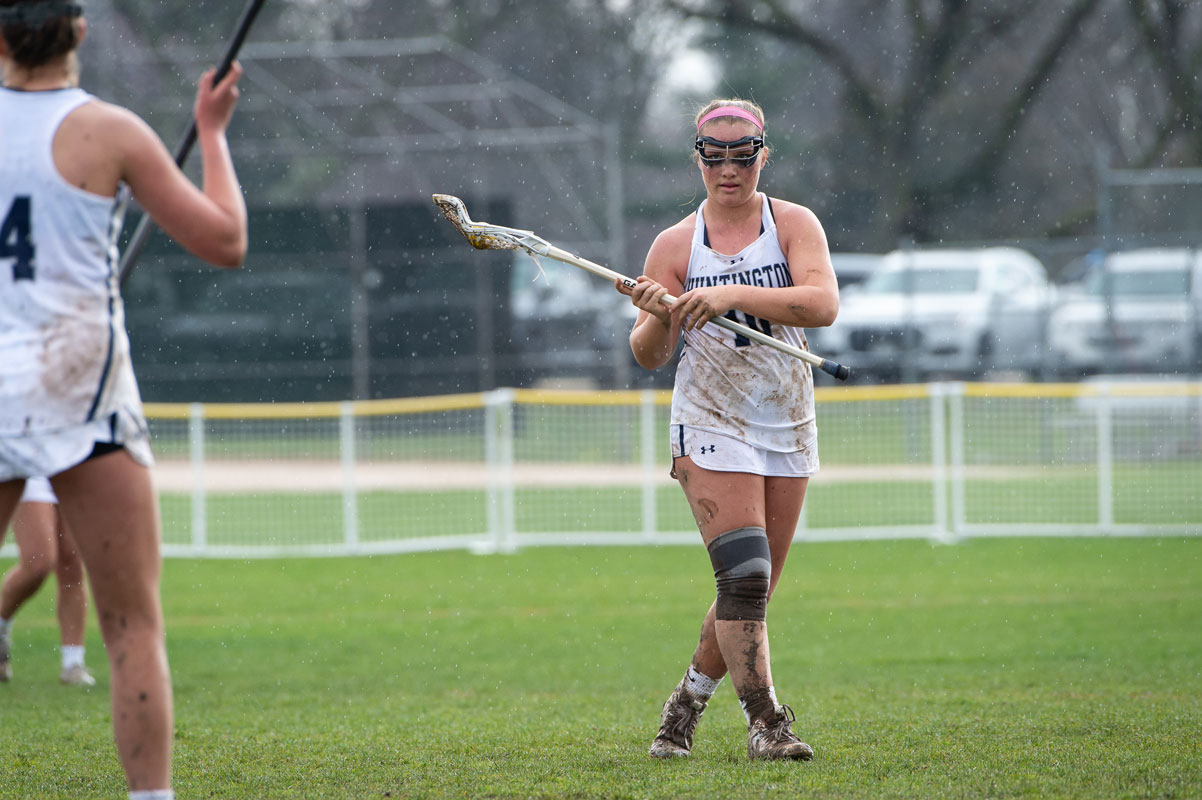 Gianna Forte scored four goals against Connetquot to give her 44 this spring. (Darin Reed photo.)

The Blue Devils badly needed a win, but Connetquot made sure that it didn’t come easy. The Thunderbirds were motivated and skilled and quickly scored three goals before Huntington could figure out a way to stop them.

Forte’s four goals led both teams. Eighth grader Bridget Callery scored twice and Regan Sansiviero also scored to give Huntington just enough offense to eke out the win. Grace Agrillo and Katie Browne added two assists each. Ainsley Proctor was sharp in the cage, stopping seven shots.
It was a big game and the Blue Devils knew it. Huntington was playing to not only insure a playoff berth, but also to move higher in the standings and gain a more advantageous spot in the post-season tournament bracket.

Efforts to win the game became more complicated when Huntington was given a fourth yellow card and forced to play a man down the remainder of the game. But the Blue Devils rose to the occasion and played outstanding down the stretch.

“We came out a little flat from the start, but it did not take long for us to turn it around,” said Forte, who has 44 goals and 12 assists. “Today was a full team effort and I am so proud of how everyone worked together for this win. This is exactly what we needed going into the playoffs. Many teams do not know how good we truly are and we are so ready to prove ourselves!”

With three players out of the lineup for various reasons, Huntington was shorthanded again and the team’s starters were on the field for almost all of the 80 minutes.

“I am beyond happy with how today turned out,” freshman Devon St. John said. “We struggled to get in sync in the beginning, but by the end of the first half we all showed up. This game was a must win for us to be in playoffs and we made it count!”

It took time for Huntington to figure out Connetquot, but panic never set it in, although the Blue Devils knew exactly what was on the line.

“I am so proud of the way everyone played today,” said senior Regan Sansiviero, who has tallied 24 goals and 27 assists this spring. “The game was very intense from the start. We were frazzled at first, but everyone played their hearts out and powered through to the end to secure a spot in the playoffs.”

The Blue Devils were exhilarated when the final horn sounded. “Super excited,” junior Grace Agrillo said. “It felt great to be in such a battle and come back and win it. Our goalie, Ainsley, played such a phenomenal game. Really, all credit goes to her.”

The game played out under the lights at Connetquot. The 7 p.m. start time provided an opportunity to see a magnificent sunset across the field in the distance.

Connetquot was playing for a playoff berth, too, and the Thunderbirds made Huntington earn it every step of the way.

“It was incredible,” senior Emily Plachta said. “When the game came down to who wanted it more, everyone locked in and gave it their absolute all and it showed in the final score.”