Improvements to Louis D. Giani Gymnasium at Huntington High School are continuing. Large blue banners were installed over each set of bleachers on either side of the gym this week and individual team championship banners were updated to reflect recent league and county titles. The colorful additions are already proving to be a hit with students.

The new banners installed this week measure about 5.5 feet in height and 40 feet in length. The home side banner features the phrase “Go Blue Devils” in script. The visiting side banner is inscribed “#Huntington Proud” and “#Huntington Strong” centered and parallel to each and also in script.

The high school gym is in the midst of many other upgrades, including an entirely new and modern floor with new markings. The facility has been completely painted white, including the ceiling. The bleachers have been repaired and refinished. New doorway saddles are being installed. Moldings have been repainted. Three new American flags have been installed.

A state of the art sound system featuring all new electronics and 18 high tech speakers will be installed soon. About a dozen non-functioning speakers will be removed from walls along with the nine ceiling speakers associated with the current system, which is more than 25 years old.

The new team championship banners include the year of every championship ever won by a Huntington High School team. Research was exhaustive to insure that all titles were listed. The championships date to 1922 and are organized under headings of league, conference, division, county, Long Island and state. Hundreds of championships are listed.

The lower level beneath the gym has also been renovated including new flooring in locker rooms, hallways and the film room, new ceilings and lighting, new bathrooms for student-athletes and coaches and new rubberized flooring in the weight room. Hallways and locker rooms have been completely repainted. New lockers will be installed over the summer. Coaches offices have been renovated. Equipment storage areas are in the process of being better organized. Three trophy cases are being placed in the film room to help dress up the space.

The Blue Devil gym lobby has also been completely renovated with new plaster walls, new ceilings and LED lighting. Two large flat panel televisions have been installed on either side of the lobby. Photos of spring season athletes are running on both TVs along with written announcements pertaining to intramurals, sports physicals, important dates, etc. A third television in the main hallway outside the wrestling room is also planned for installation. New showcases have been constructed and are presently being filled with championship trophies, plaques and historical items. The area has also been cleared of clutter.

New exterior lighting has been installed and new exterior doors are on their way. Two new interior doors that separate the gym area from the academic hallway are also planned.

The district is also planning to develop a new fitness center in an area off the main gymnasium that has fallen into disuse. It will be available to physical education classes and teams and perhaps a wider audience. The current area will be demolished and new walls and ceilings will be installed along with new flooring. New lockers will also be installed and an existing team room will be renovated. The new fitness center will be air conditioned.

The fitness center is part of a multi-year plan, the first of which will feature the construction of the room and renovations to adjoining spaces. The room will include a SMART Board to help facilitate workouts. Some existing equipment will be used in the room, which will also be available for yoga and general exercise classes. The second year of the plan will include the acquisition of a variety of strength and cardio related equipment.

Finally, the district intends to slightly reconfigure the rig room off the gym. There are plans to purchase about $20,000 of equipment to enhance the existing weight room and rig room.

There are also plans to install new areas of wall padding on either side of the main court. LED lighting was previously installed and which has significantly brightened the space.

An outdoor area behind the gym where Project Adventure apparatus was previously located is also in the midst of renovation. A new outdoor basketball court has been created. The area has been paved and two new baskets have been installed. A volleyball court is envisioned for the remaining space.

The gym area improvements are building upon other recent year upgrades, including a completely new girls’ locker room off the main gym lobby, that includes 995 lockers and all new rest room and shower facilities, new benches and tiles. A new paved gym area parking lot was created last summer and has been filled daily since then. New fencing in the area was also installed. A new mat was fitted into the wrestling room.

The Huntington High School gym was constructed in 1957/58 and this marks the first large scale renovations to the space in more than 60 years. 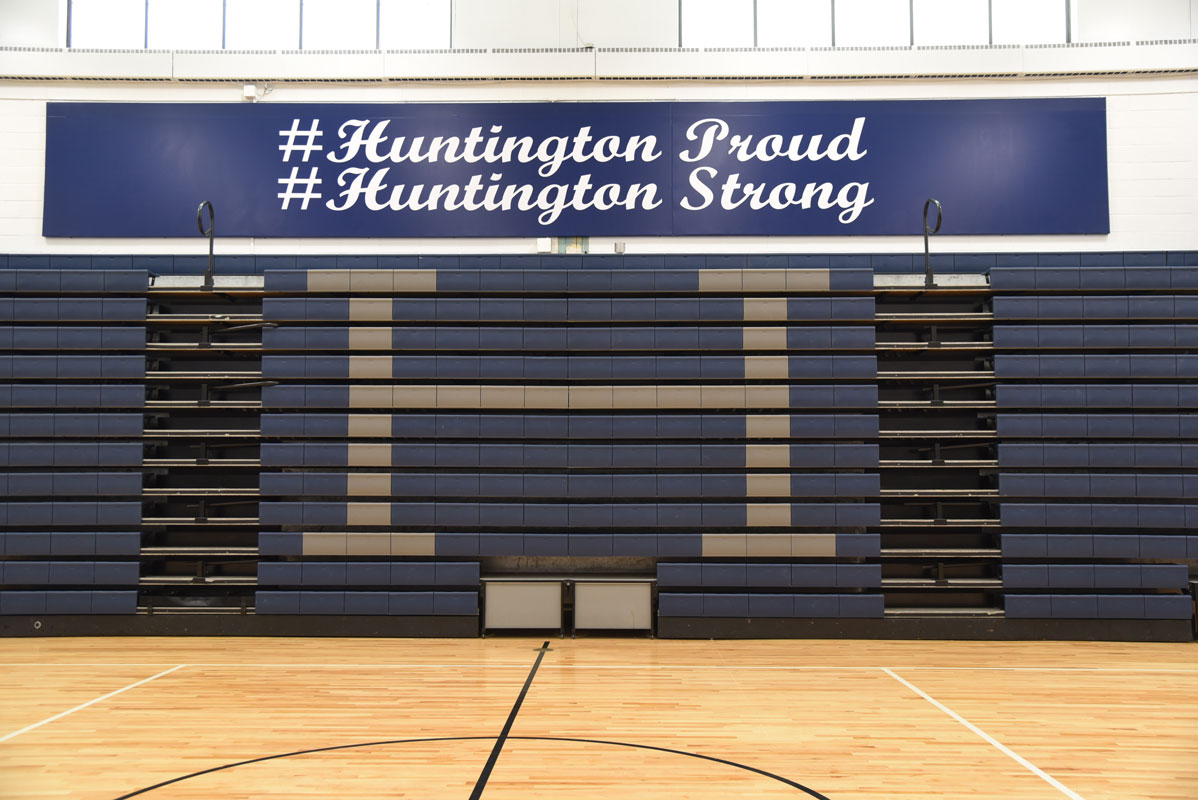 A large vinyl banner in now in place over the visiting side bleachers. 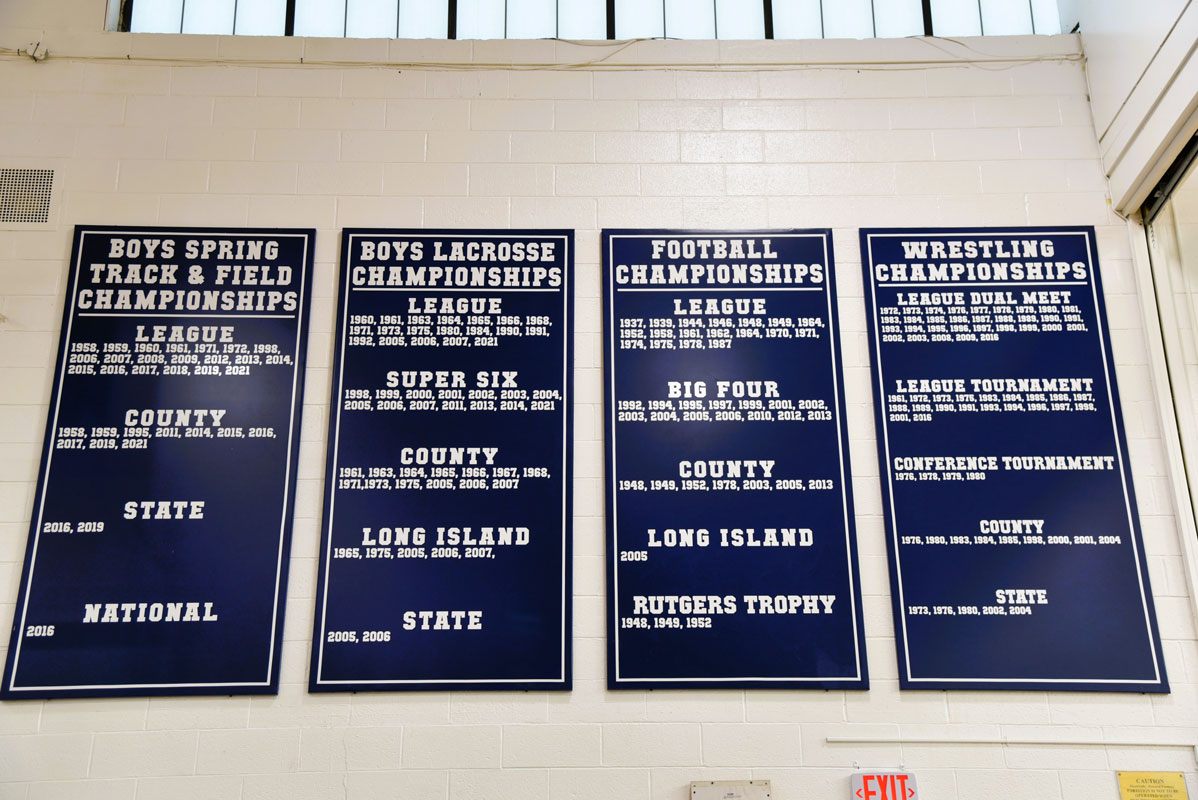 Every sports program's championships are listed on separate team banners. 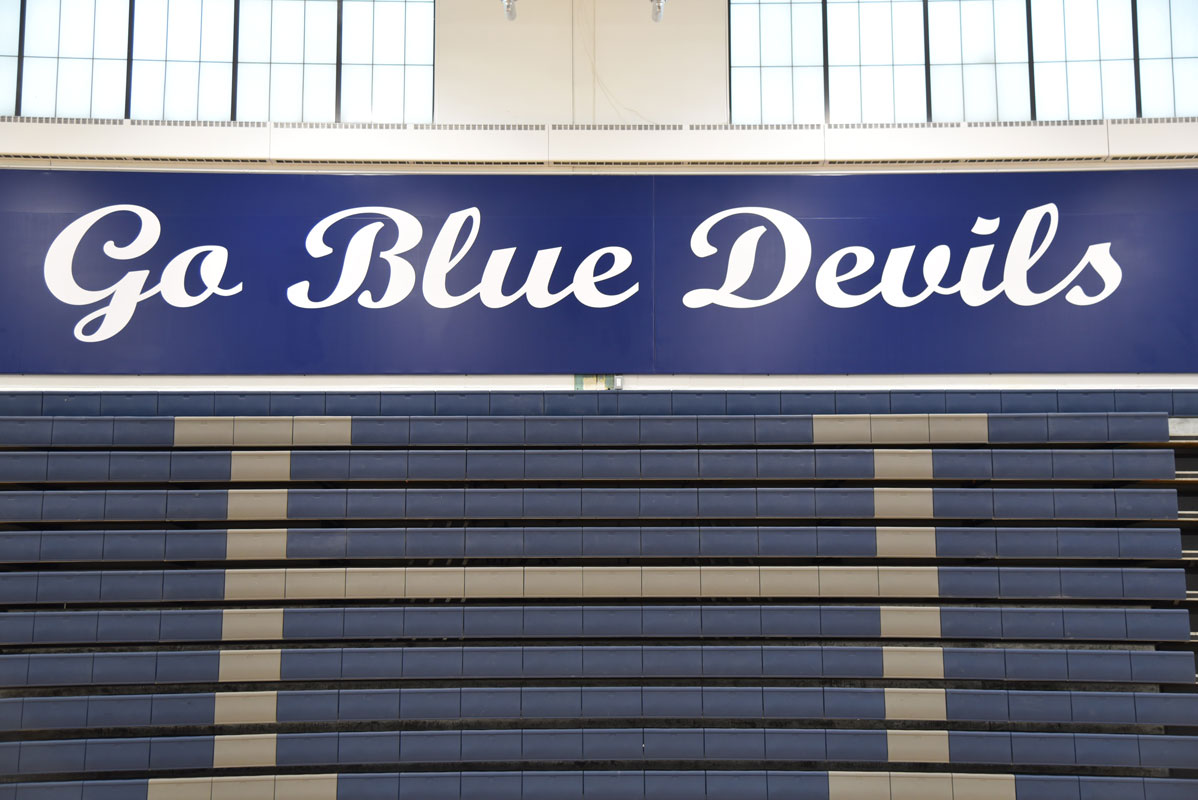 A large vinyl banner in now in place over the visiting side bleachers.

Every sports program's championships are listed on separate team banners.