Rentsch was named to the All-League and All-Conference teams while Vohs was tapped as Academic All-County. Borenstein garnered All-League honors. The players were accompanied by family members and Blue Devil head coach Ken Parham. 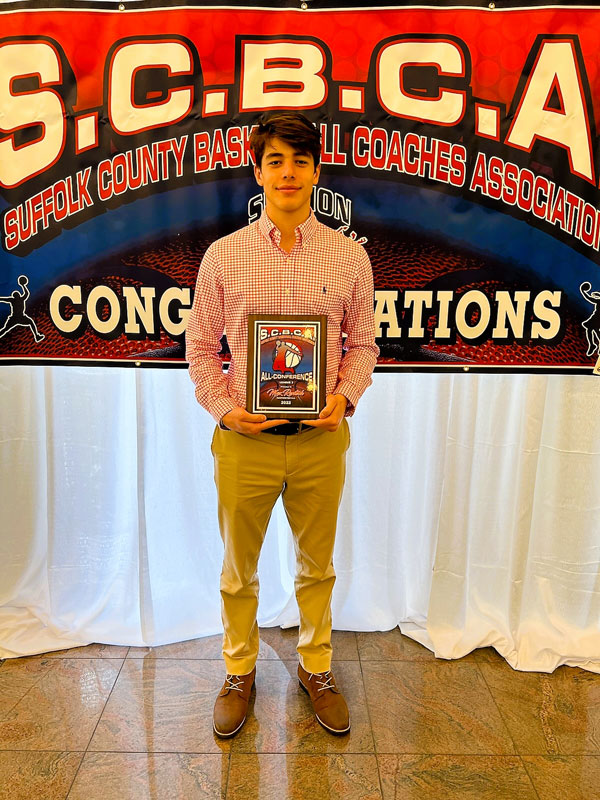 Max Rentsch was named to the All-Conference team.

The teenager said that “whether it be studying for a difficult exam or getting ready for the basketball season,” hard work has paved the way for his success. He has seized upon most of the opportunities that have come his way. Rentsch especially enjoyed the festive atmosphere that developed around the Blue Devil team as it made a playoff run and at two playoff games. He plans to study marketing at Binghamton University.

One of the top students academically in Huntington’s Class of 2022, Vohs was also a key player on the Blue Devil basketball team, which won 12 games this past winter.

He said that the key to his success has been having his family encouraging and pushing him to do well. He has taken delight in playing for the Blue Devils, making new friends and developing relationships with his teachers. Vohs said the highlight of his Huntington career was winning the final five regular season games to reach the playoffs and then toppling Newfield in the opening round of post-season play.

Vohs played in 21 games, scoring 44 points, pulling down 53 rebounds, dishing out 15 assists and adding 16 steals and two blocks. He plans to study finance and business at the University of Florida.

Borenstein shined in his junior year. He shot 54.0 percent from two-point range and a whopping 40.3 percent from beyond the three-point arc. The teenager average 11.1 points, including 25 three-point baskets. He recorded 145 rebounds, 29 assists, 16 steals and eight blocked shots. He shot 84.6 percent from the free throw line, making 22-of-26 shots.

Parham is working to assemble his 2022/23 team. Borenstein is expected to play a central role on next winter’s Blue Devil squad.