The Huntington High School junior varsity lacrosse team battled to a 7-7 record against stiff competition this past spring. The 24 man strong roster featured a group of players expected to be future offensive and defensive Blue Devil varsity stars.

“Our team saw every day as an opportunity to work toward improving something,” said Troffa, the JV’s longtime head coach. “It’s challenging not having a lot of time to improve between competitions, but this team found ways and worked hard. This team has fight and always battled until the end of games.”

Knieriem turned in a great year. “Despite his incredible defensive skills, he managed to score goals with his long pole and he has that competitive edge that coaches love to see in their players,” Troffa said. “I know he is going to make a lot of noise on varsity.”

Smith emerged as one of the Blue Devil JV’s top players. “This guy is one of the hardest working kids on the team,” Troffa said. “He worked equally hard in practice and games and always challenged himself by pushing himself the limits. He did great things for the team offensively and defensively and we could always count on him to clear the ball even if he had to run through five defenders. He is coachable, positive and does his best even when he knew the coaches weren't looking.”

Fallon was sharp in goal throughout the spring. “He is a gentleman on and off the field,” Troffa said. “Aside from holding us down in some close games, he showed great class all throughout the season and racked up many great saves.”

Sophomore Christian St. John was another key player, notching 12 goals and adding two assists and 35 ground balls.. “He showed great improvement in a short amount of time, especially since last season,” Troffa said. “It was a pleasure to see him grow into a powerhouse who dominated on defense. One of his best attributes as an athlete is his grittiness and willingness to battle.”

Sophomore Chris Grover played through injuries and made significant contributions. “He worked hard as a defensive middie and made himself known as a good dodger while bullying his way to the cage,” Corcoran said. “Despite missing part of the season, he came back with the fire ready to play.”

Thomas Breingan displayed a knack for blocking passes. “He knew all the play calls and gave it his all each time he stepped on the field,” Corcoran said.

Cain Carney shined on defense for the Blue Devils. “He is tough and aggressive,” Troffa said. Zink earned admirers as an excellent all-around player. “Joey was solid this season and he helped us win a lot of faceoffs,” the coach added.

Hrybenko’s scoring and playmaking were crucial to the Blue Devil machine. “Brian did an outstanding job this season,” Trotta said. Sosnowski proved his worth game after game as a starting attackman, playing solid through all 14 games.

Jehu Ramsay also enjoyed breakout year. “Jehu is an exceptional athlete and our most improved player,” Troffa said. “I know he will be a valued member of varsity next year.”

The JV has a pair of talented long stick midfielders. “Chase Gadaire and Dominick Mattio both did a tremendous job for the team at long stick middie this season,” Troffa said. “They are both hardworking, smart and always push themselves.”

The season highlight? Undoubtedly, Huntington’s comeback at Cold Spring Harbor. “We dug deep and pulled ourselves back up from a five goal deficit,” Troffa said. “Although it wasn’t enough, this was when the we realized we have a team that will not get defeated lying down and will fight until the end.”

Who will return to the JV next spring? That’s an open ended question. The varsity coaching staff will evaluate that team’s needs, take an assessment of the returnees and any voids left by graduation and then review this spring’s JV roster to determine who will get promoted. Without question, many will be getting the call to advance to the varsity.

“We are very excited to see the return of Parker Wands, James, Vohs and Dominic Mattio, all of whom played an integral role on defense this season,” said Troffa about some possibilities.

Offensively, the JV could be stacked. “We are looking forward to the return of our attackmen Connor Fox, Joe Boeckmann, James Larson, Ethan Naima along with middies Colin Lennon, Thomas Smith, Gavin Deegan and Brian Lynch,” Corcoran said. “I am greatly looking forward to the return of one of our utility players, Zach Schnitzer, who played at both attack and middie positions. In this group we have some guys that were the top scorers and got the most ground balls through this last season. These guys are a promising squad who have high expectations of themselves and have the motivation to improve on last year’s record.”

With Blue Devil varsity goalie Sammy Mac Arner set to return for Huntington, another decision looms at that position. “We are very much looking for the return of Will Fallon and Brennan Ackerman,” Troffa said. “They both did a fantastic job this season and were leaders on the field.”

The 2023 JV’s ranks will be filled out by freshmen who are moving up from Finley. The Blue Devils are expected to be even more competitive next spring. 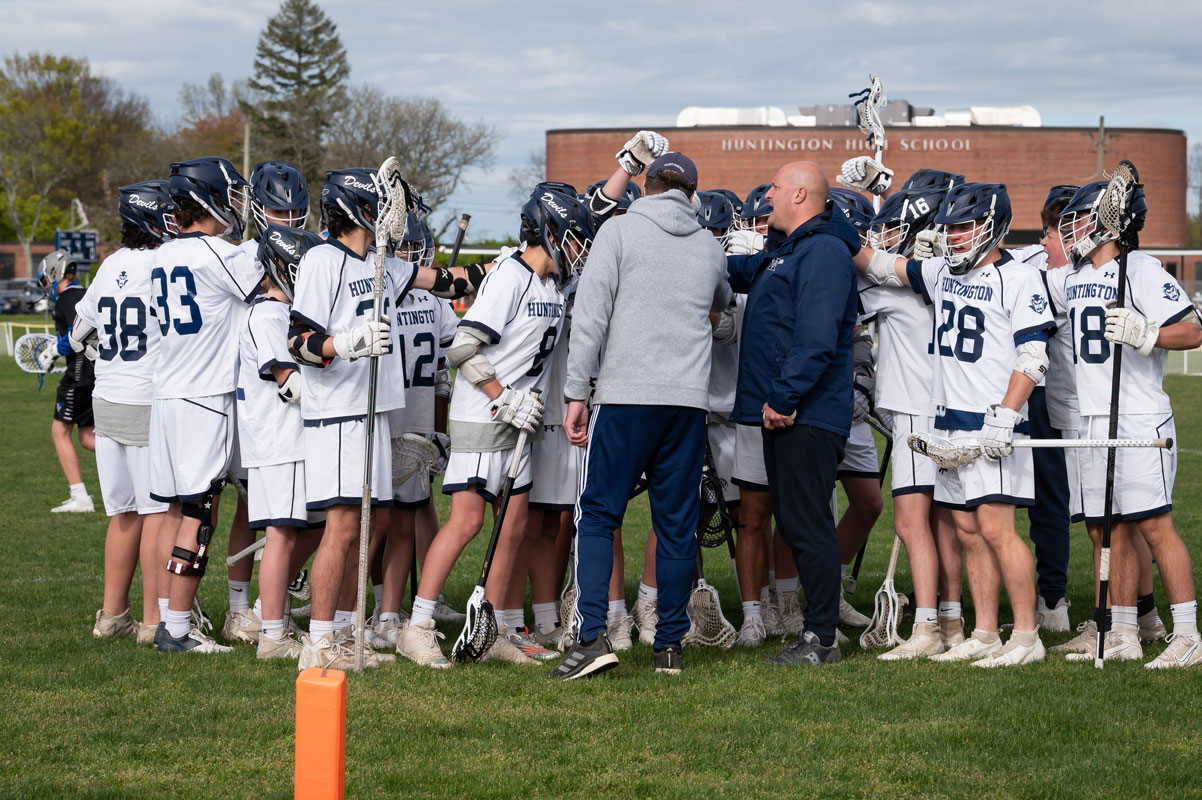 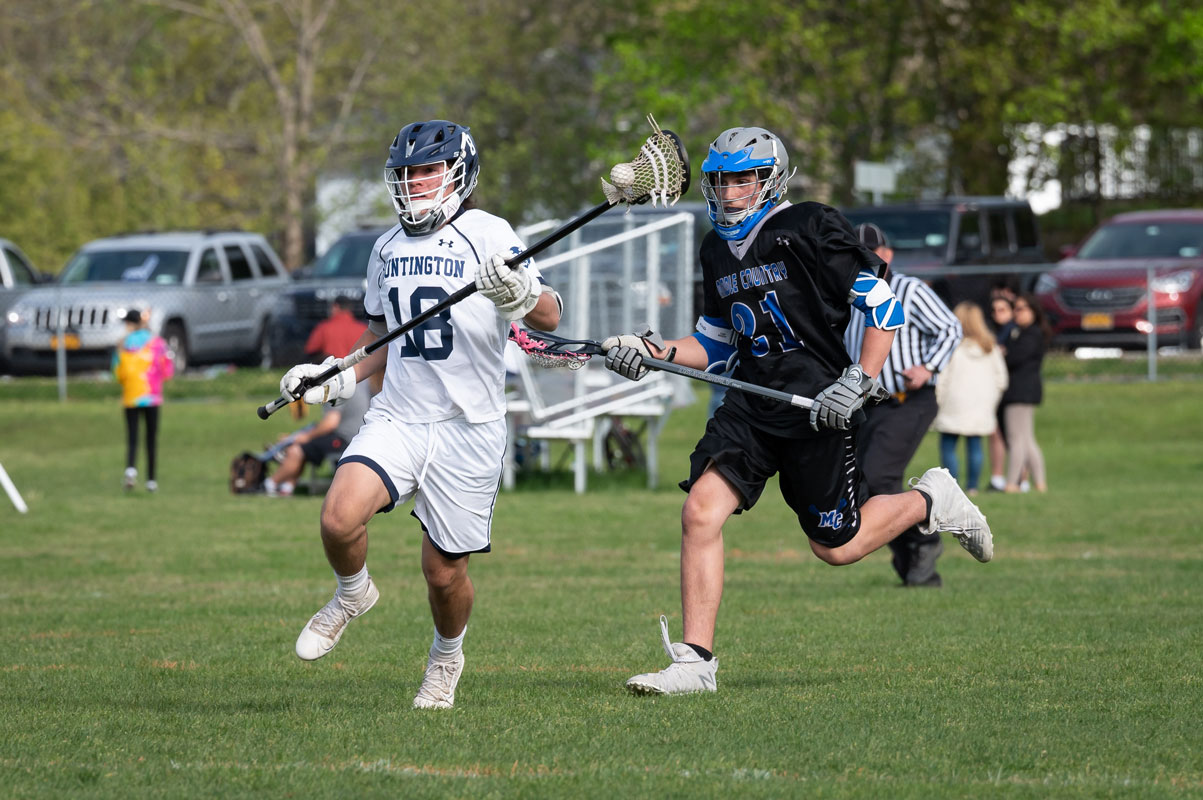