Seniors Katie Browne and Max Rentsch are Huntington High School’s recipients of this year’s Butch Dellecave Award, which is presented to one graduating male and female from each Suffolk high school who possess “outstanding accomplishments on the field of play, in the classroom and within the community.”

Ms. Browne and Mr. Rentsch were joined by their families at a Sunday morning awards breakfast at Villa Lombardi in Holbrook, which drew of crowd of more than 500. Former New York Jets great Marty Lyons gave an inspirational keynote address, urging the talented seniors to use their lives to help others grow and to make the world a better place. 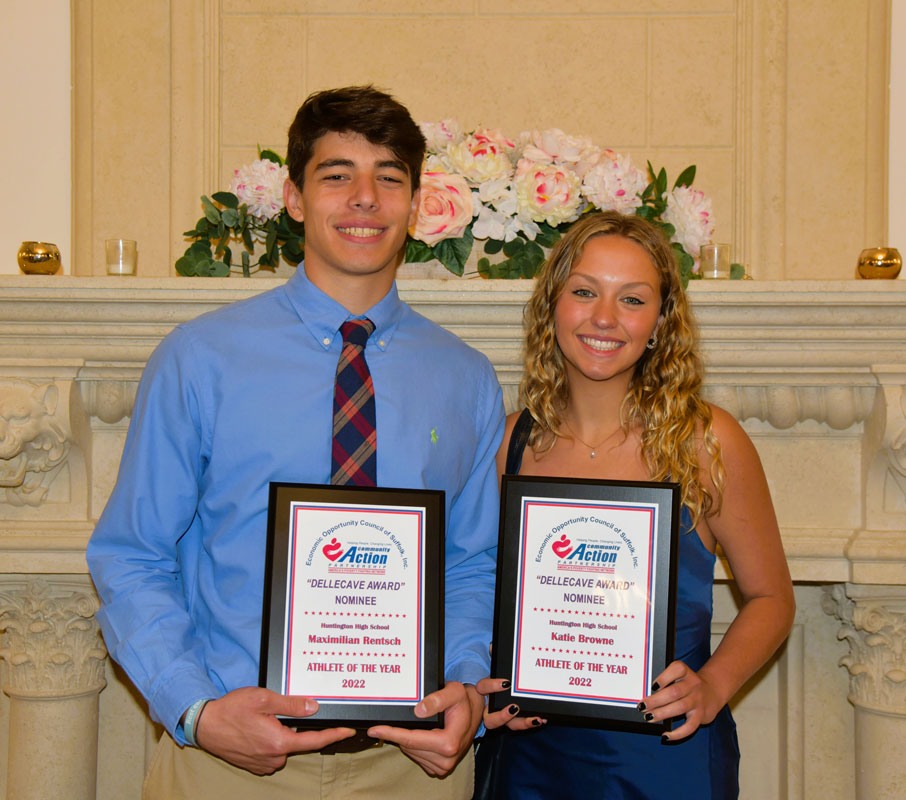 Guy “Butch” Dellecave was on the faculty of the Connetquot School District for 30 years. He was also one of the top rated basketball officials in Suffolk and the state and directed the Smithtown basketball summer league for 35 years. One of the main proponents of the Suffolk Sports Hall of Fame, he founded the Dellecave Education Institute for Professional Development, which provided classes, workshops and seminars for administrators, teachers and coaches. Mr. Dellecave passed away suddenly on August 27, 2000.

The 22nd annual awards program recognized 103 seniors from across Suffolk. Ms. Browne was one of five finalists for the female countywide award. She was asked to stand before the crowd as her credentials were read for all to hear.

The Dellecave Awards are presented by The Economic Opportunity Council of Suffolk, Inc. and the Butch Dellecave Foundation, Inc., which provided a $1,000 scholarship to each countywide award winner. Newsday selects five male and five female finalists from which the countywide honorees are selected.

The 103 award recipients were chosen on the basis of outstanding athletic ability as well as having displayed exceptional character and integrity. During the breakfast, master of ceremonies Robert Schwender requested that each of the award recipients stand up and hug their parents for all they have done for the teenagers.

A five year, three sport varsity athlete, Katie Browne has captained the varsity soccer, basketball and lacrosse teams and captured post-season awards in every sport. A member of four different honor societies, she has been on the high honor roll during every academic quarter for the past four years and has repeatedly earned New York State Scholar-Athlete recognition.

Ms. Browne’s skilled play helped the Blue Devil girls’ basketball team win back to back league titles. The public relations coordinator for Huntington’s Class of 2022, she has extensively volunteered, including collecting food items for local pantries, creating a “safe Halloween” program for elementary school age youngsters and in multiple homecoming community events. She continued her volunteer service by teaching in youth lacrosse clinics and serving as a junior lacrosse coach with a local team.

Chosen by her classmates as a Natural Helper, Ms. Browne quietly assists fellow students who are struggling to work their way through difficult personal and family challenges. The recipient of the New York State Senate Youth Leadership Recognition Award, she was cited for serving as a leader and being a positive role model in the community. She will be attending Bucknell University, where she was recruited to play on its women’s lacrosse team. She plans to study markets, innovation and design in Bucknell’s Freeman College of Management.

Max Rentsch is an All-Conference basketball player who captained and led the Blue Devils to 12 victories this past winter, including a playoff victory for the first time in many years. He also played on Huntington’s varsity soccer team, which reached the county finals for the first time in 57 years. A member of National Honor Society, English Honor Society and Math Honor Society, he has qualified for the high school’s high honor roll during every academic quarter for the past four years. He has volunteered extensively as a member of both the Key Club and Habitat for Humanity and at his church in Greenlawn. He plans to attend Binghamton University in the fall. 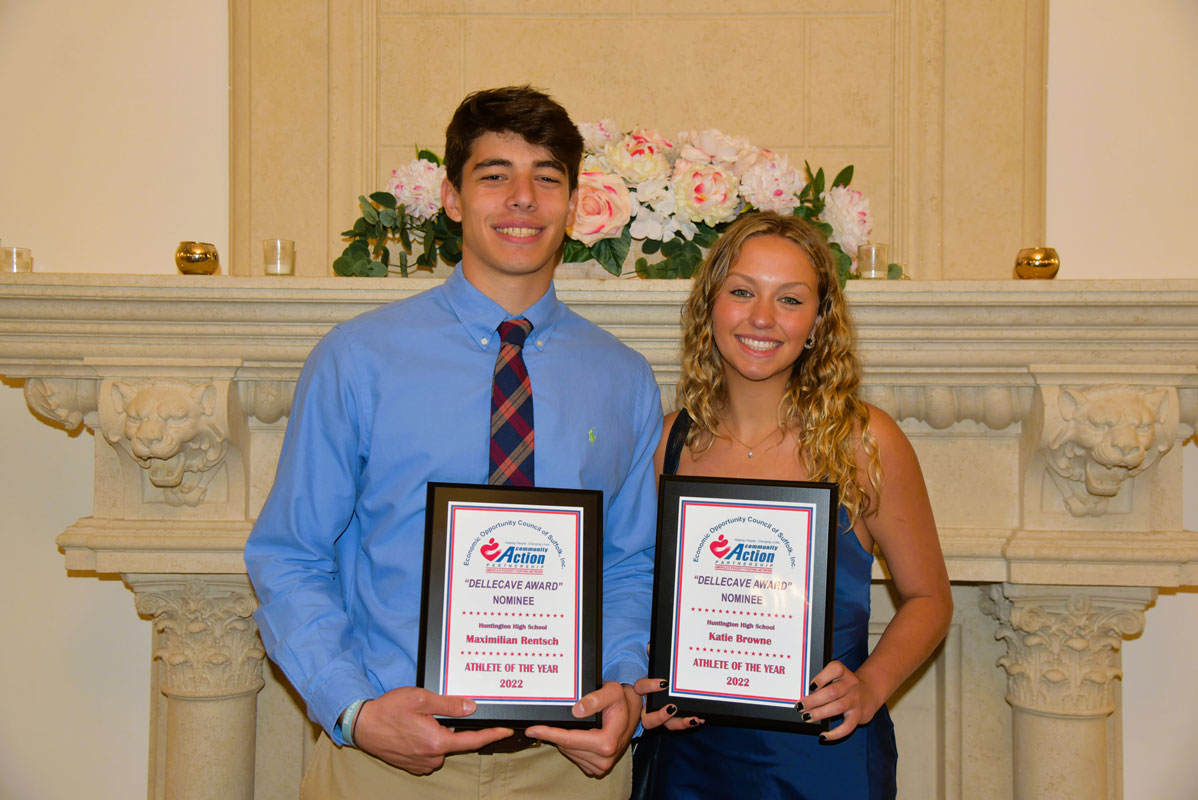 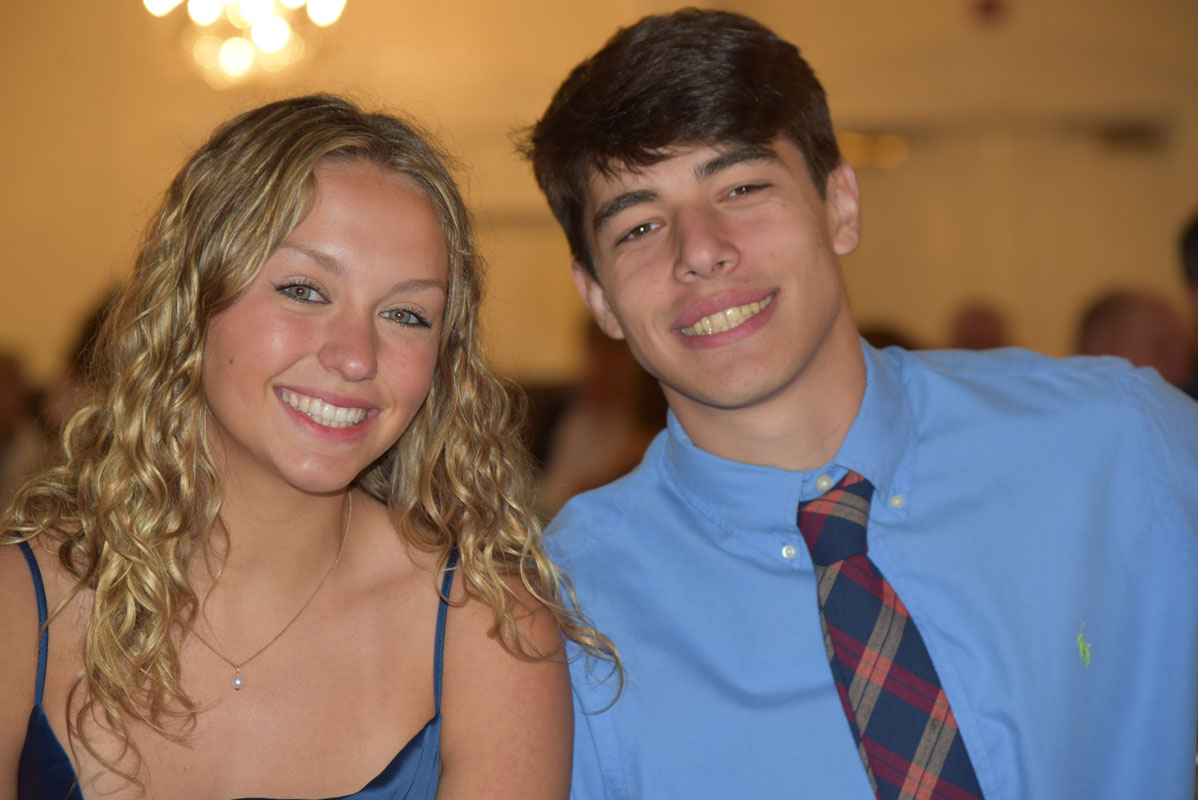 Katie Browne is flanked by her parents, Karen and Doug at the Dellecave Awards breakfast 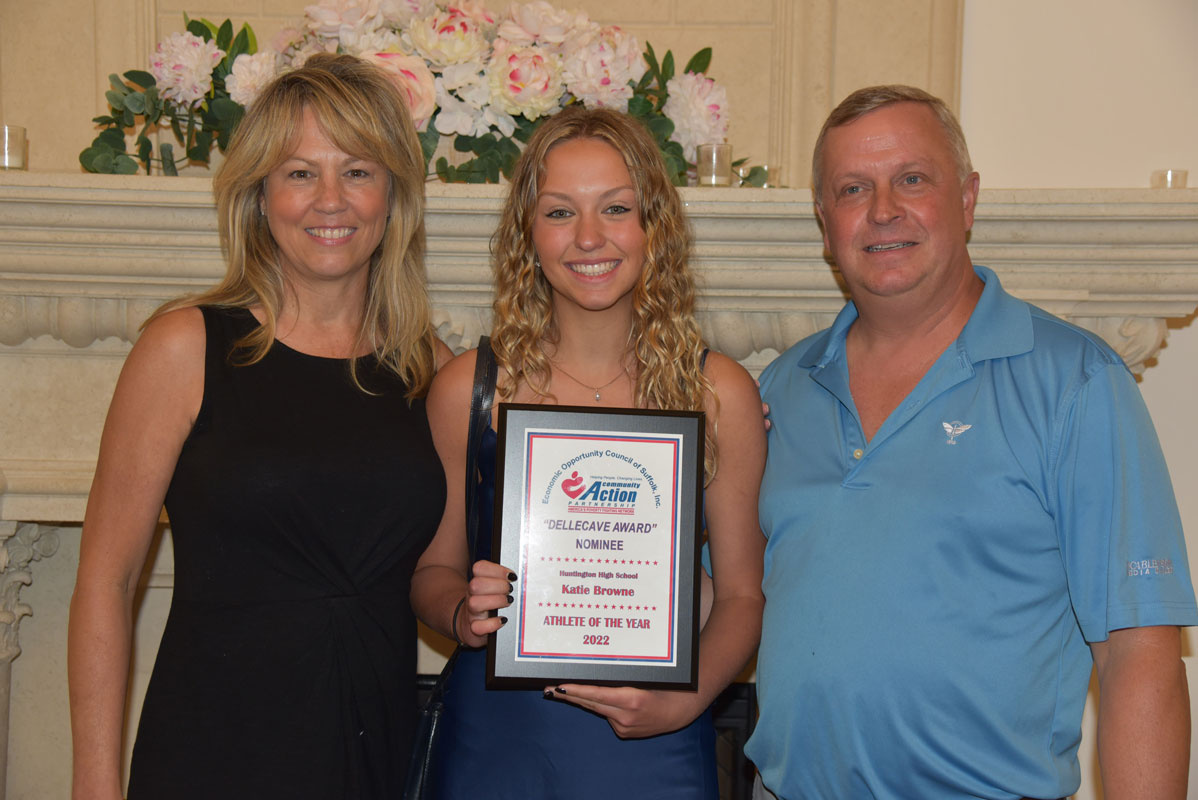 Max Rentsch with his parents, Andreas and Helen and brother, Julien

Katie Browne is flanked by her parents, Karen and Doug at the Dellecave Awards breakfast

Max Rentsch with his parents, Andreas and Helen and brother, Julien