Teddi Carnesi and Analisse Batista scored back to back goals to give the Huntington High School girls’ soccer team a second half lead before the Blue Devils held off a furious late game rally and held on to upset Commack in the county playoffs on Saturday, 2-1.

Carnesi and Batista both scored unassisted goals to give Huntington what appeared to be an insurmountable two goal lead with about 13:25 remaining, but the victory was anything but assured as talented Commack stormed back to score less than a minute later. The Rams battled hard to the last second before a crowd of 300 in Commack.

“I totally had faith in the team today,” Carnesi said. “We have such a strong bond and I know that we can face anything with complete toughness.”

Huntington will play at second seeded Ward Melville on Wednesday at 2 p.m. Admission is free.

Huntington was shorthanded for the game, with two key players injured and unable to suit up and two others unavailable due to other commitments. But the Blue Devils who did take the field were a determined group who gave Commack all it could handle.

“We had to play a great game to beat a team as good and as well coached as Commack,” said John Walsh, Huntington’s head coach. “I’m so happy for my players who worked so hard out there today. It’s wonderful to qualify for the playoffs and even better to win in them. This is a game that all of us will remember.”

The opening 40 minutes were filled with intensity as the two teams went at it. The game was very physical and both Commack and Huntington display the awesome talent that got them into the playoff game. Neither side dared to let up even for a few seconds, fearful that the other would step into the void and take advantage of the opportunity.

The scoreboard was filled with zeroes until Teddi Carnesi scored off a twisting corner kick. Batista scored again a short time later to put Huntington on top, 2-0. While some in the crowd thought the win was in the bag, Walsh knew better.

“A team as good as Commack is never out of it,” said the veteran coach, who is assisted by Vincent Tannazzo. “Commack’s players weren’t about to give up and we knew it. They spent the last 12 minutes giving us everything we could handle and then some. They are a great group.”

Huntington goalkeeper Makaylah Frazier played the best game of her career, compiling 12 saves, including several on exceptionally hard shots. “She was incredible in goal for us,” Walsh said.

Reserve goalies Ashley Genao and Reese Rinaldi and forward Jamie Garcia Sorto and midfield Jill Panos stood at the ready should they be needed.

Huntington was on Cloud Nine after the final horn sounded. “The game was awesome,” Browne said. “All of us worked so hard and gave it our all. It was such a rewarding experience! I can’t wait for the second round of the playoffs.”

The Blue Devils savored the big win on Sunday, which was a much needed day off for the team. Thoughts of the game and the final score continued to bring smiles to the faces of players.

“I think the key to winning the game was how we all worked as a team,” Carlson said. No one ever gave up. Being able to keep up with these good teams involves a tremendous amount of hard work and thinking. We had each other’s back and worked as one and that’s what helped us succeed.” 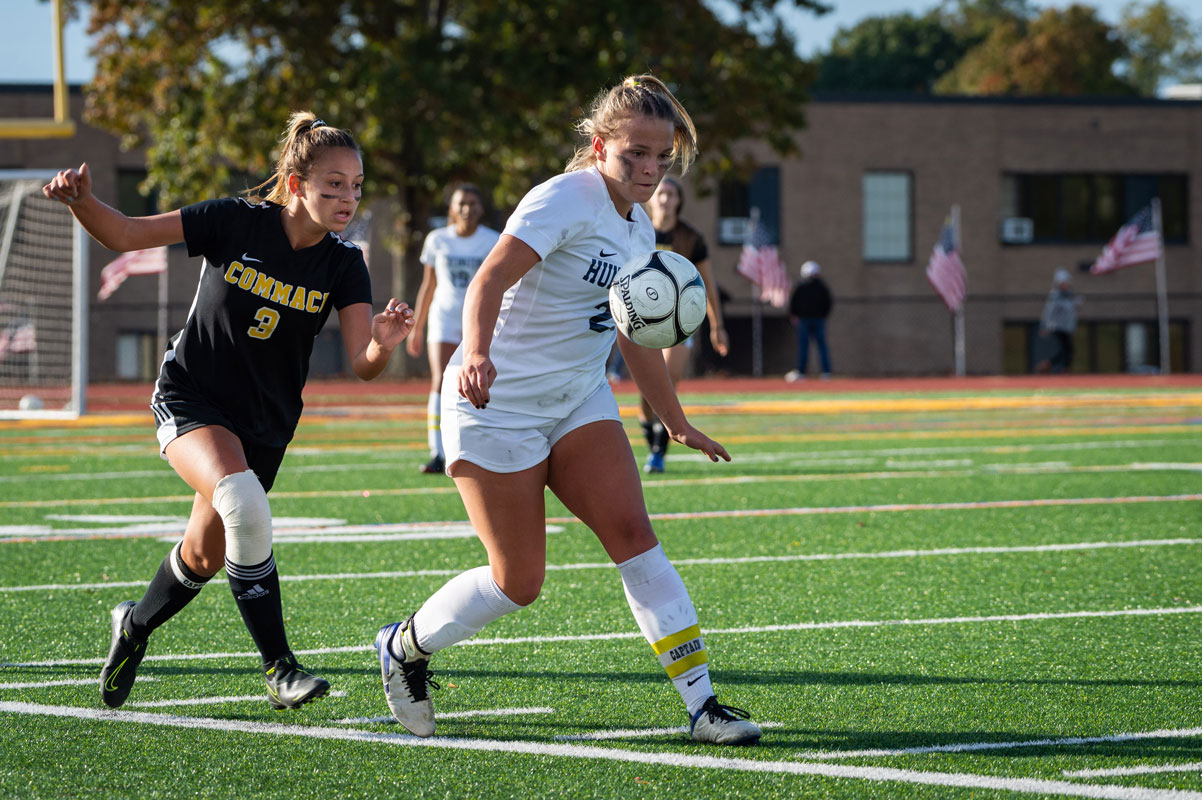 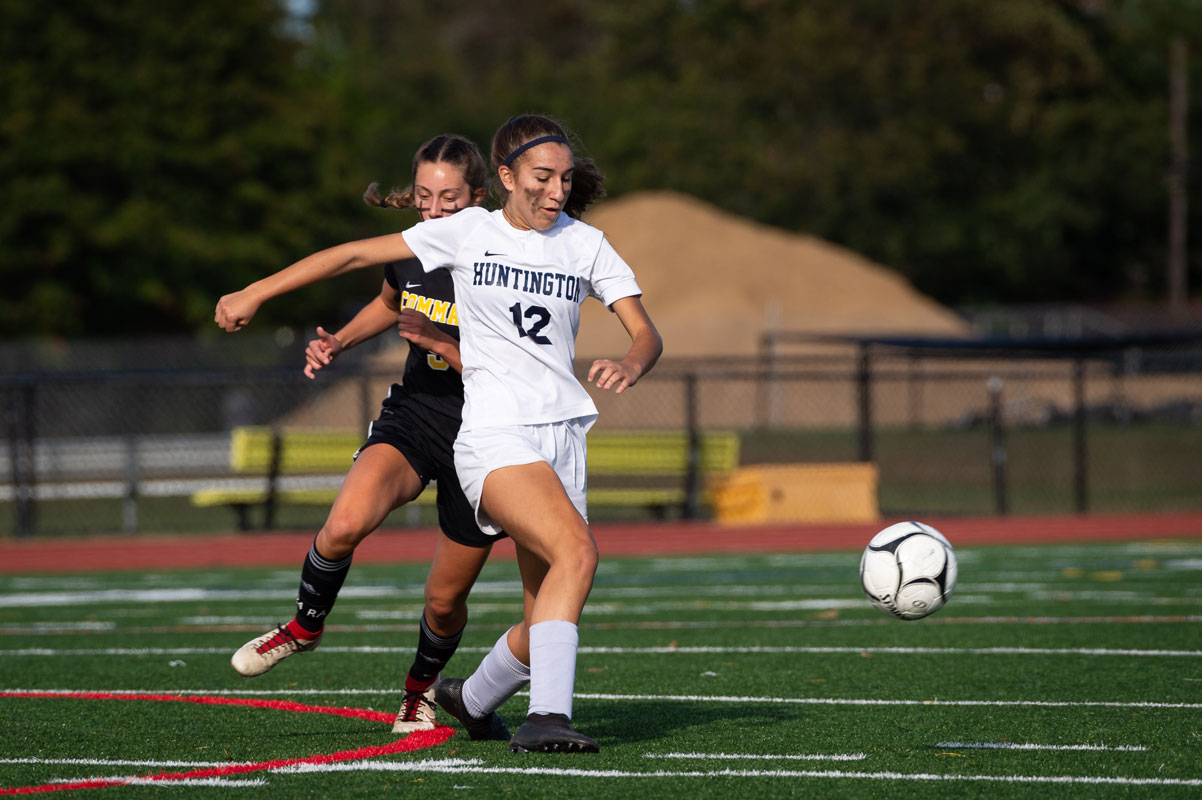 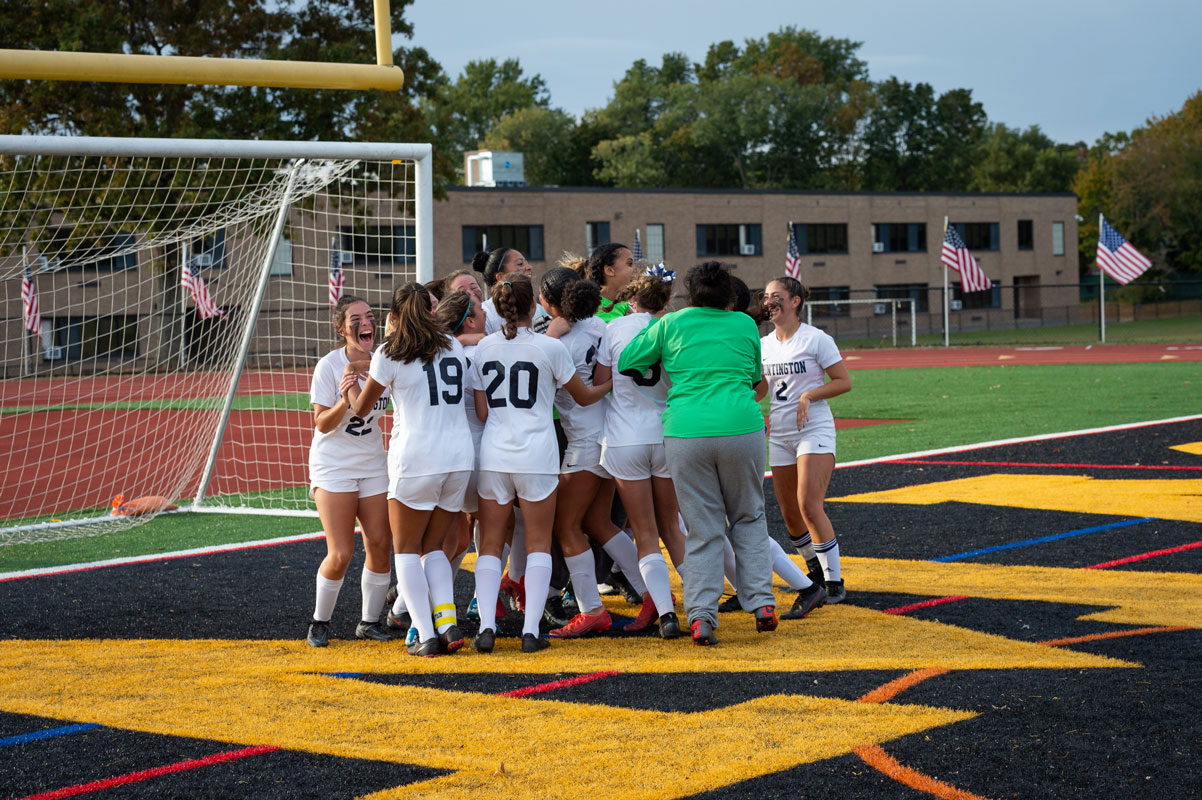