Henriquez found herself in the right place at the right time and made it count, blasting a shot past the goalie that put Huntington on top. The Blue Devils then ran out the clock over the final five minutes.

“It feels pretty awesome knowing that I scored the winning goal against Sachem East in the last few minutes of the Senior Day game,” Henriquez said. “I couldn’t have done it without my teammates and coaches. We deserved this win and we need to continue playing our hardest for the playoffs!”

Sachem East is one of the top teams in the county and it came into the Senior Day game as the heavy favorite, but the Blue Devils had other ideas. Huntington was inspired from the start and although the home team fell behind early it stayed close enough and eventually tied the score and put Henriquez in position to score the biggest goal of her career.

Analisse Batista and Emily Plachta, two of the best players in Suffolk, notched a pair of first half goals for Huntington. Blue Devil head coach John Walsh sensed an upset in the making and gave his team a fiery and motivational halftime speech, imploring players to run hard to every ball and make every shot count.

The score stayed tied until late in the second half when Henriquez performed her heroics. But many players put Huntington in a position to win, including Teddi Carnesi, who assisted on all three goals. Blue Devil goalies Makaylah Frazier and Ashley Genao teamed up to stop 11 blistering Sachem East shots.

With Huntington Superintendent James W. Polansky enthusiastically encouraging the team from the sidelines, the Blue Devils held off hard charging Sachem East in the final minutes. When the final horn sounded, Huntington’s players raced out on the field and toward Frazier in goal. It was the biggest win of the season and came against a team with 10 victories.

Head coach John Walsh spoke about each of the seniors while assistant coach Vincent Tannazzo stood nearby. Walsh said the teenagers all brought something very special to the team and that Huntington would not be complete without each one of them.

“They have all played hard for us and today is a wonderful culmination of all of that effort and work,” Walsh said. “But we aren’t through yet. Let’s do something special in the playoffs starting on Saturday.”

The win over Sachem East will move the Blue Devils higher in the standings and give them a better position in the post-season bracket.

The seniors stood together on the field with their underclassmen teammates on one side and family members on the other. They basked in the glow of the portable lights that were turned on and which surrounded the stadium.

“My career in a Blue Devil soccer uniform has really been the best,” Browne said. “I love this sport and the atmosphere my teammates and coaches bring to each day makes it even better. I have learned so much and gained great skills while wearing this jersey! I can’t thank my coaches and my teammates enough!

The seniors were presented with flowers and gift bags. They posed for photos with each other and with their parents and family members. There were tears, hugs, laughs and smiles. A party at the field house followed with sandwiches, chips and cookies. The group lingered, not wanting the moment in time to end.

“Blue Devil soccer has been the highlight of my high school career,” Carnesi said. “I have made so many wonderful relationships and I have grown as a leader. Nothing is better than stepping on the field to play a high school soccer game. The past five years with Coaches [Maria] Canino, Walsh and Tannazzo are years that I am going to remember for the rest of my life.” 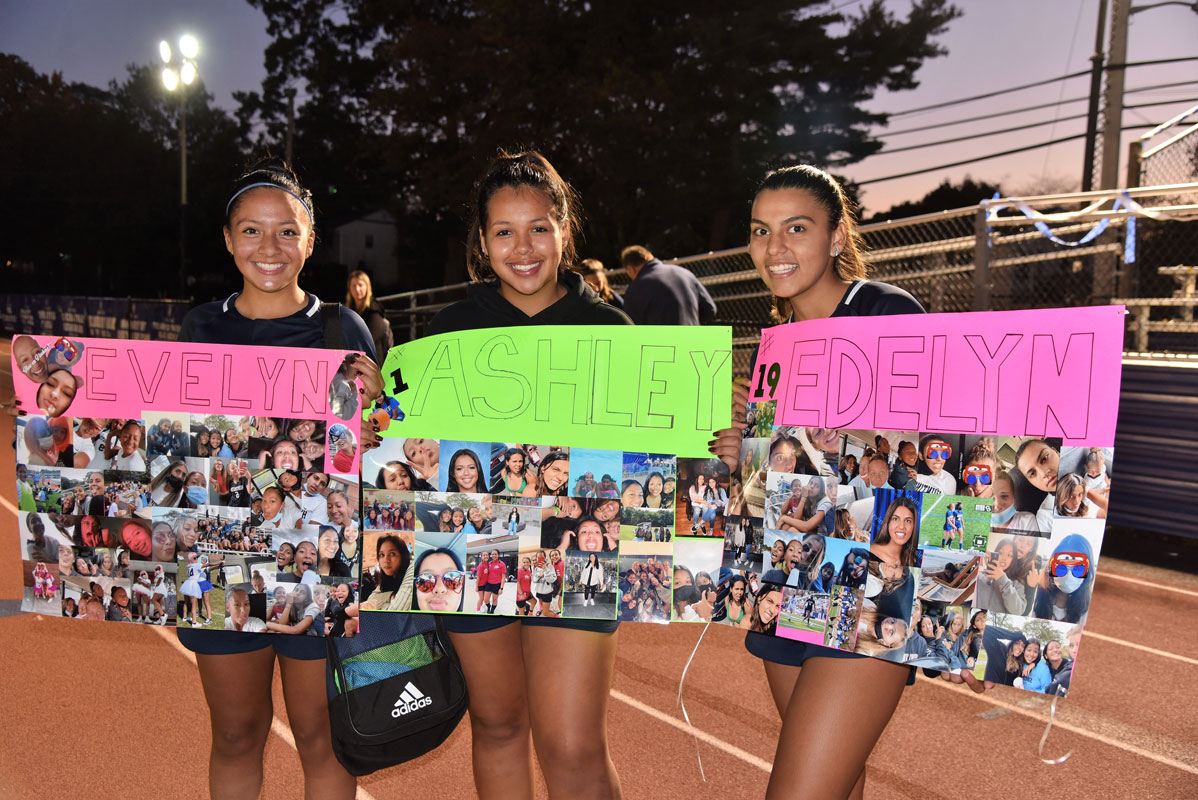