Huntington High School’s Class of 2021 received every ounce of fanfare that it deserved before a crowd estimated at 3,000 at last Saturday night’s commencement exercises at Stony Brook University’s Kenneth P. LaValle Stadium.

There was applause throughout the affair and frequent displays of emotion. The graduating seniors saw once again that no community loves its kids as much as Huntington. 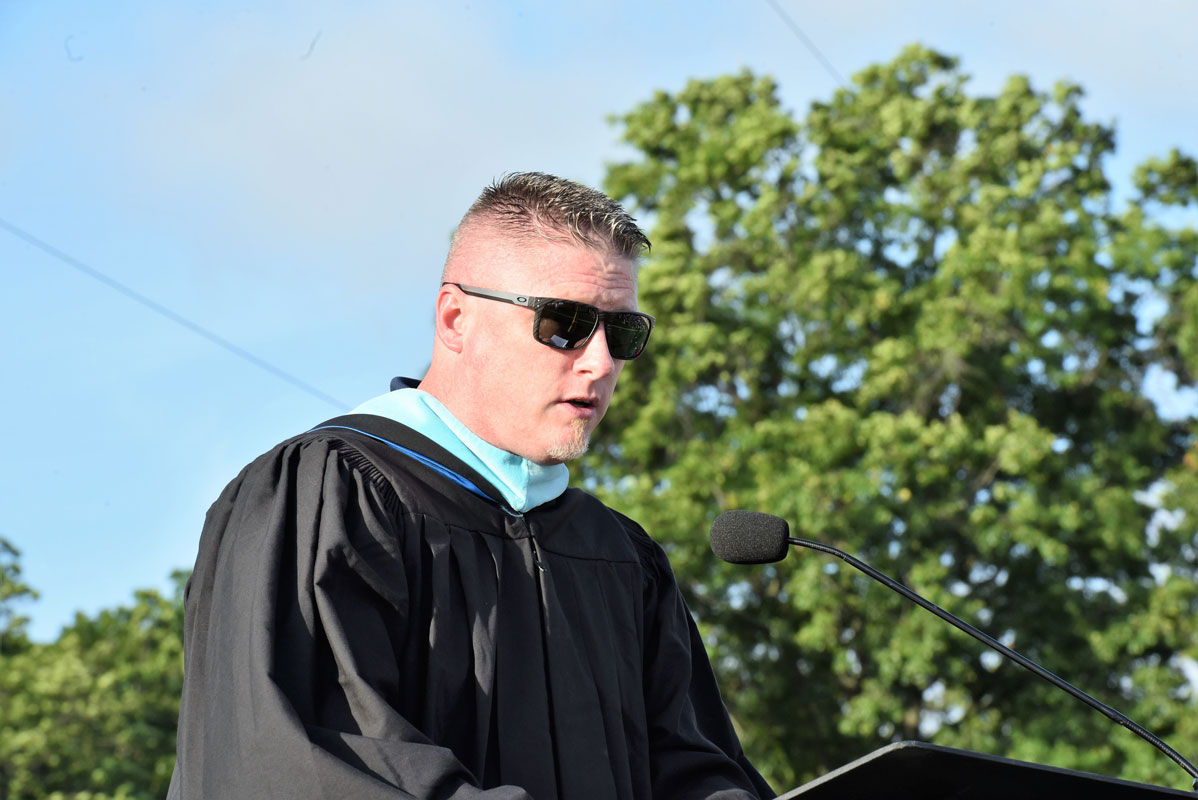 Principal Brenden Cusack encouraged the new grads to trust in themselves as they move forward with their lives.

Clad in blue and white caps and gowns, the more than 300 exceptional teenagers marched into the stadium to cheers as strains of Elgar’s “Pomp and Circumstance No. 1” filled the air. The remarkable group captured more than $20 million in scholarships and grants and gained admittance to some of the most highly regarded colleges and universities in the nation.

This marked the Huntington’s 160th annual commencement exercises, which date to July 18, 1862 when a class of six students earned diplomas as the Civil War raged to the south. Few schools in the country can match such traditions.

This year’s senior class earned a variety of academic, artistic, athletic, musical and humanitarian awards, garnering county, state and national recognition along the way. The top scholars and student leaders sat in chairs on the huge stage last Saturday night with school and district officials and Huntington’s entire Board of Education.

Senior members of the chamber choir performed a beautiful rendition of Francis Scott Key’s “Star Spangled Banner” under the direction of Victoria Garbarino and then sang Huntington’s Alma Mater.

The ceremony included a series of short addresses. Class of 2021 President Taylor Case, who will attended the University of Delaware announced the seniors would be gifting the balance of monies they had raised over the past four years to the rising junior and senior classes for use in funding the proms that are planned for 2022 and 2023.

Co-valedictorian Alexander Bellissimo, who will be attending the University of Virginia, chose to focus on the positive side of the past year during his address to classmates.

“Although entering senior year in a global pandemic certainly wasn’t ideal, there were so many positives that came out of it,” Mr. Bellissimo said. “We made the best of it, and I don’t think I would’ve traded this year in for any other. The Huntington administration, teachers, and staff did a phenomenal job making this year feel as normal as possible for us, from going back to school every day to being able to play sports and participate in extracurriculars to bringing back field day and prom. Actually, they didn’t make this year feel normal, they made it normal. For us to get through school and life in this way makes me excited for what’s to come in the future for all of us. We learned how to be resilient when situations are less than ideal, which will help us to succeed.”

Co-valedictorian Grace Wildermuth, who is headed to Vanderbilt University in the fall, was equally positive in her outlook during an address to classmates and the big crowd.

“Despite my fears about ‘what’s next?,’ I do have confidence that our class in particular is equipped to handle the unknown,” Ms. Wildermuth said. “Nothing says, ‘what’s next?’ like waiting every two weeks at the end of junior year to see when we would be going back to school. Nothing says ‘uncertainty’ like questioning whether we would have a prom, sports seasons or spring concerts. I think it’s safe to say we are experts in dealing with change, doubt and anxiety, which is a skill that will stick with us long past high school.

“Compared to the constant change we’ve faced these past two years, graduating seems a lot less frightening. And unlike changes due to COVID, graduation is a purely positive thing! We’re here to celebrate our successes and look forward to new opportunities as we get older. We have the power to make a positive impact on our families, friends, and communities. Alongside the confusion and doubt, the question ‘what next?’ should also produce excitement and optimism. As you walk across the stage, I hope you embrace the countless possibilities in the unknown with the confidence that you have made it through so much to get here.”

Huntington School Board President Christine Biernacki was introduced to the crowd by her daughter, senior Sarah Biernacki, who is headed to Ohio University.

Mrs. Biernacki lauded the seniors for being able to navigate through the incredible challenges posed by COVID-19 since March 2020 while maintaining a positive outlook, despite losing out on many opportunities normally associated with the junior and senior years.

Superintendent speaks of “fortitude and determination” 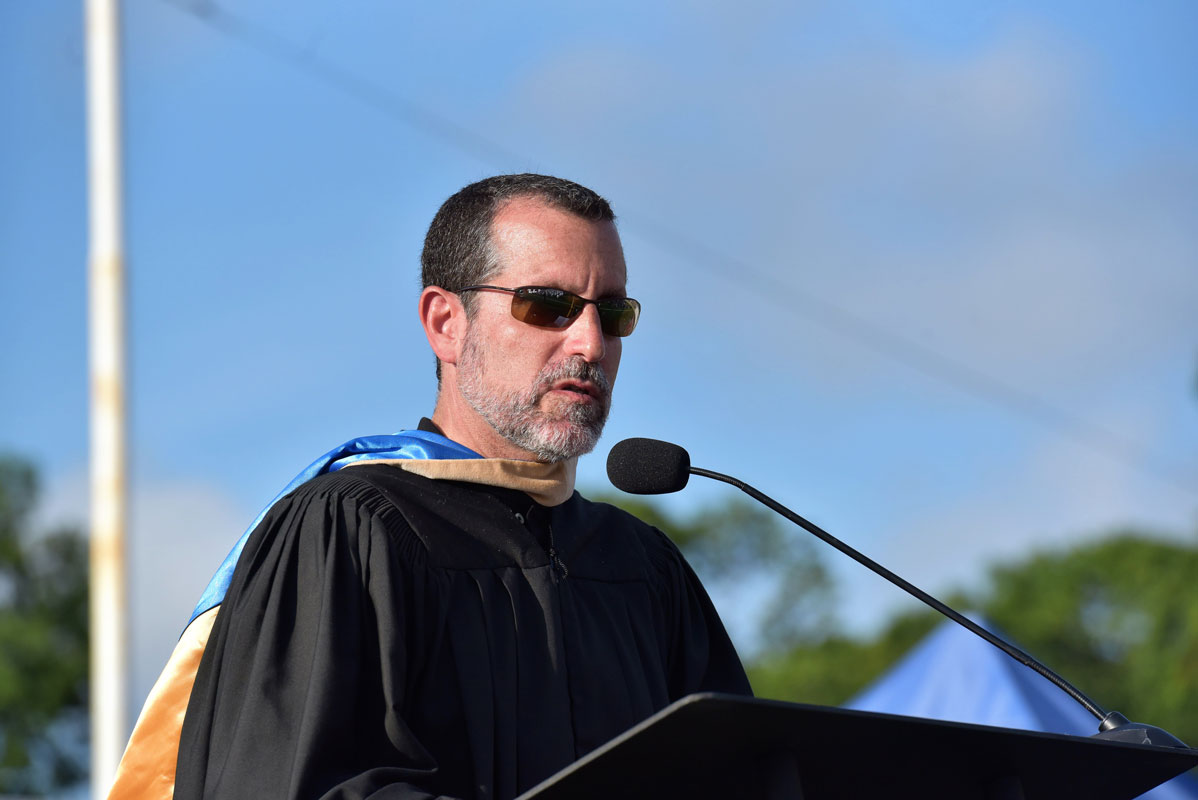 Superintendent James. W. Polansky spoke about the “fortitude and determination” demonstrated by the Class of 2021.

“As I shared in my message to families yesterday, I wish we could keep you here indefinitely, but that would deny the rest of the world of what you will bring to it,” Mr. Polansky said. “Your collective character and perennial optimism were consistent beacons of hope. Since last spring, there has been fear and loss experienced by many. This may very well have been the most difficult stretch that you have experienced in your young lifetimes. You have been reminded continuously of what you have missed. I implore you, however, to remember what you have accomplished, what you now know you can accomplish, and your ability to bounce back even stronger as individuals and as members of society. You are resilient and do not shortchange what you have learned!”

“It has been said that there are several things you can’t recover in life …
1. A word after it’s said;
2. An opportunity after it’s missed;
3. Trust after it’s lost;
4. Time after it’s gone.

With these things in mind, please, please never waste time arguing, remain humble and kind, and embrace every moment you have with those you love. Know that we will always love you and that Huntington will forever be your home.”

Principal Brenden Cusack was filled with pride throughout the commencement. He has developed many wonderful relationships with senior class members, but the veteran educator knows it’s time for them to move on to the next stage of their lives.

Mr. Cusack urged the graduates to remain confident about the future and their own ability to steer any situation in a positive direction.

“So the question comes to mind, what is most important for us as we face challenges big and small, as many of you have over time?,” Mr. Cusack asked. “What can be learned from all of this that we have experienced and what might you take with you as you confront new situations and challenges along your next steps? I know it’s very easy and quite cliché to say that there’s always a silver lining in each situation or to remember that in every challenge or disappointment there is a lesson. But I really am a true believer that no matter what happens, we must always try to find the good, even in the difficult times, hard as it may be.

“So I think there are many lessons that can be taken from the experiences of the last couple of years and beyond that will help in the years to come. But to me, the most important thing; the one thing that has helped me most both personally and professionally, is to remember that no matter the situation, you always have the power to control what I refer to as the you inside of you.”

Caps thrown high into the air

Serving as master of ceremonies of the commencement was Isabella Aligieri, plans to attend SUNY College at Geneseo. She introduced class faculty advisor Jordan Schessler (fellow advisor Kristin Fortunato was unable to attend), who announced the name of each senior before diplomas were presented by members of the Huntington School Board.

The tradition-laden ceremony evoked a variety of emotions in both the seniors and their family members as tears could be seen in more than a few eyes.

As Mr. Polansky signaled the seniors had met the requirements for a diploma and were now officially graduated, the new alums tossed their caps high into the air to the cheers of the crowd, before hugging one another and being congratulated by their families.

The teenagers and their loved ones lingered for well over an hour outside the stadium, posing for seemingly endless rounds of photos before saying goodbye to one another, Many of them sensed this could be the last time the entire Class of 2021 would be assembled together in one place and they appeared unwilling to let go of the moment even a single minute early. 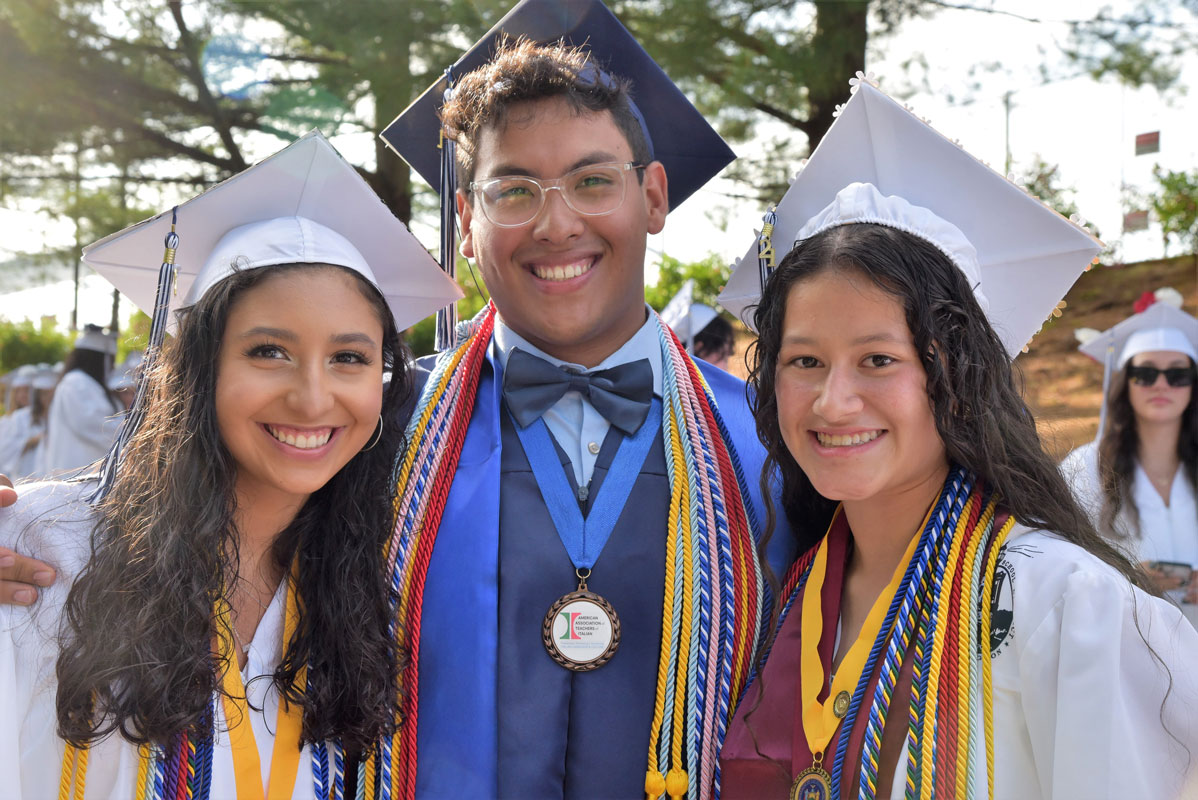 They did it! Huntington's Class of 2021 shined during the 160th commencement exercises. 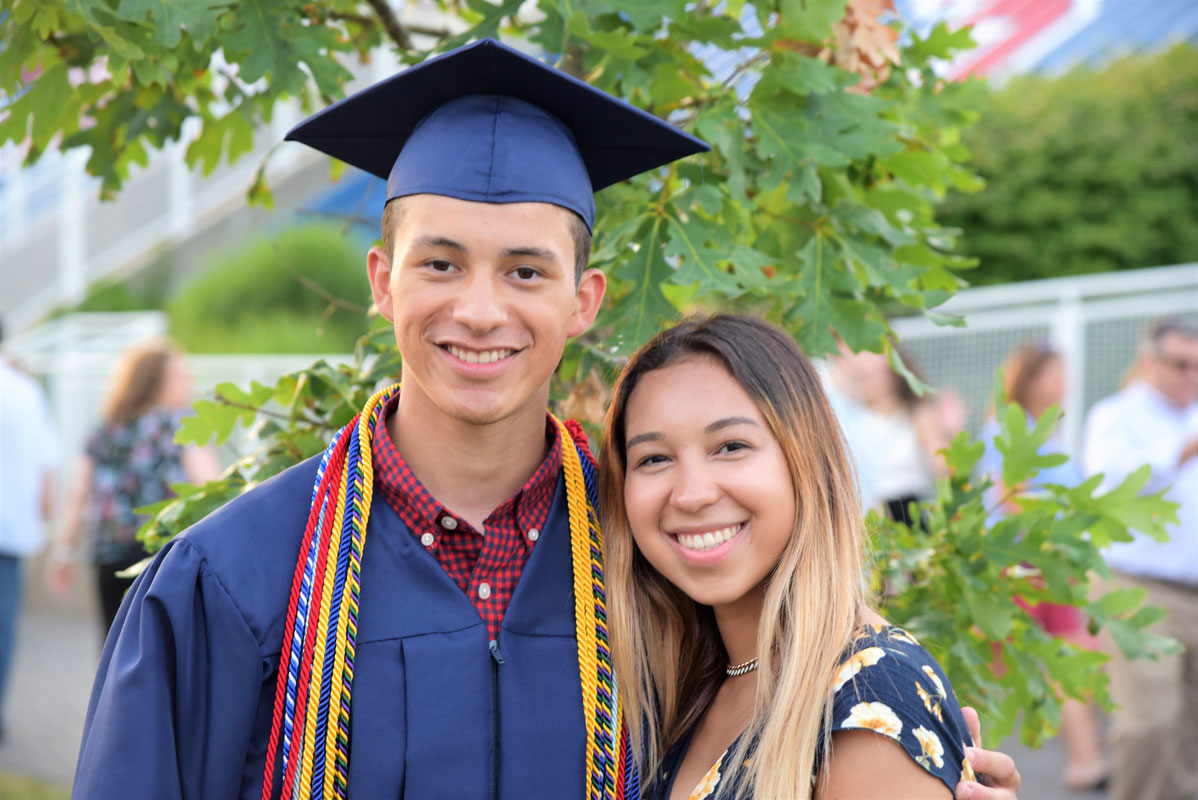 Alex Gonzalez and his sister, Natalie are happy following the 160th commencement exercises. 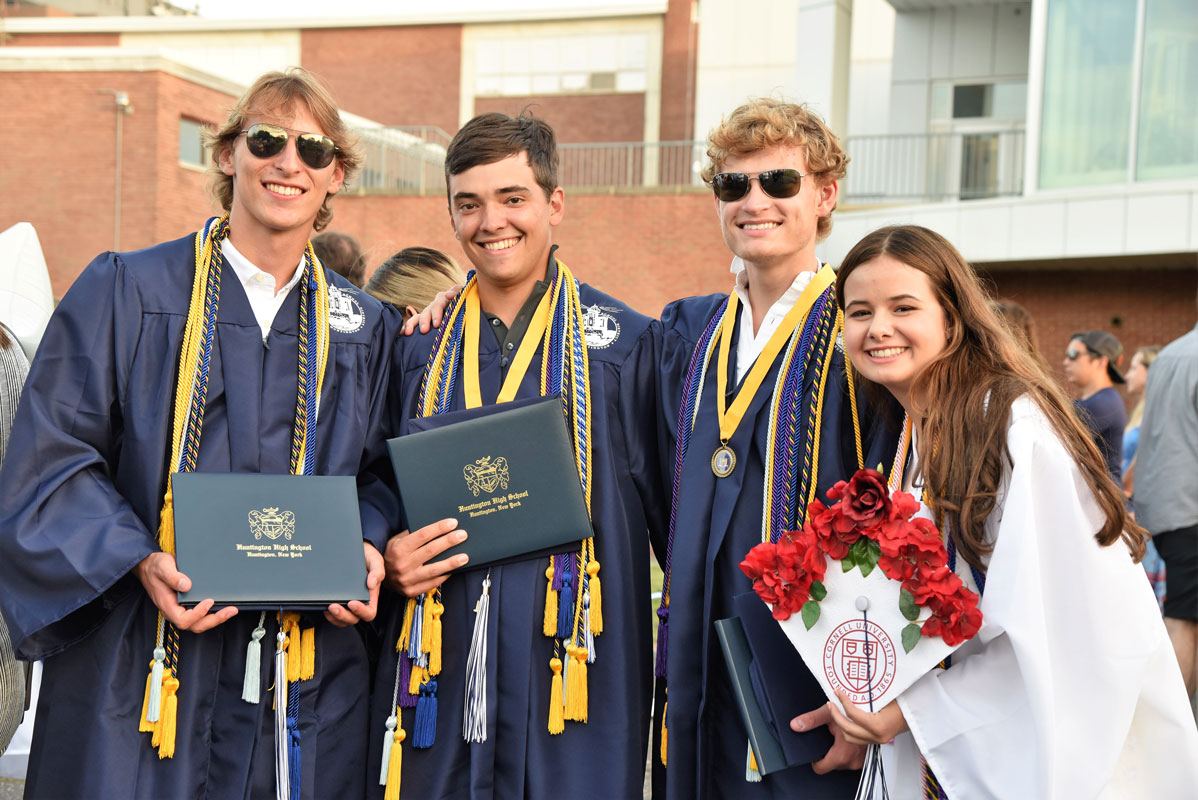 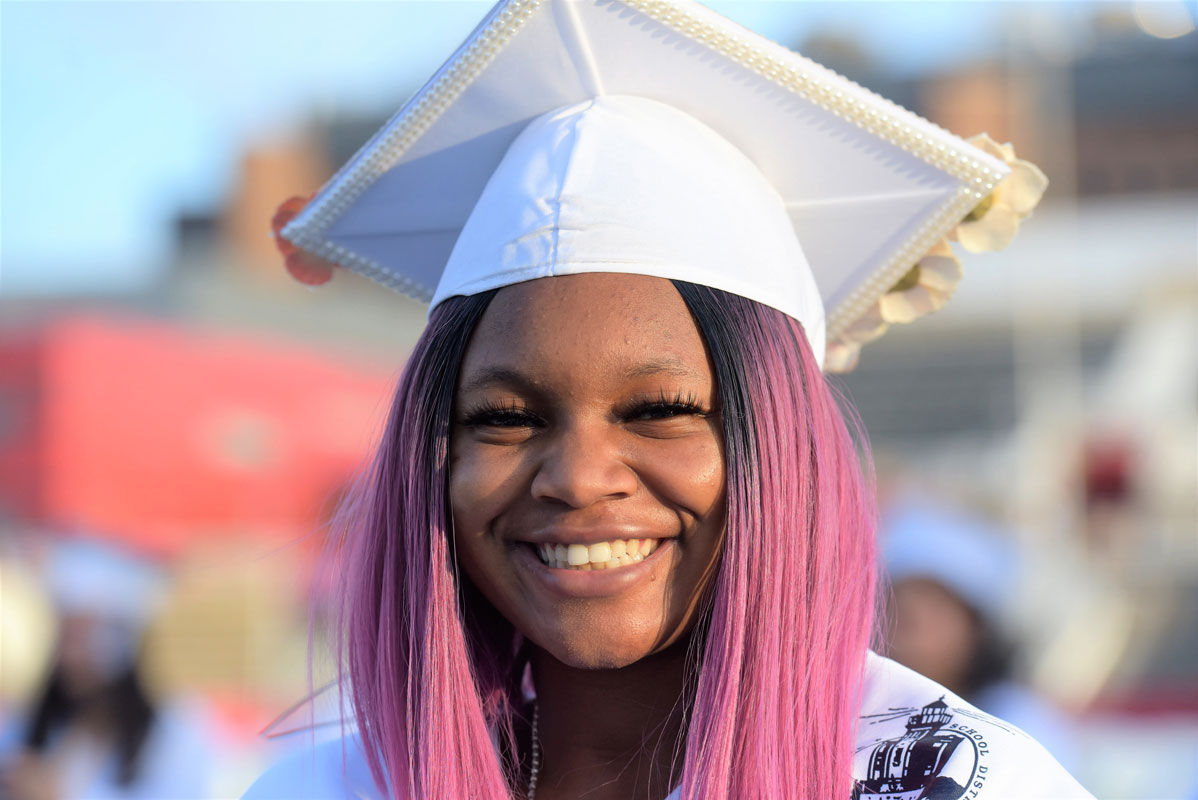 The commencement was a day of pure bliss for the more than 300 graduates.

They did it! Huntington's Class of 2021 shined during the 160th commencement exercises.

Alex Gonzalez and his sister, Natalie are happy following the 160th commencement exercises.

The commencement was a day of pure bliss for the more than 300 graduates.