Huntington has won 11 consecutive games and is 16-3 overall, but the Blue Devils know they will have their hands full with Bay Shore, which is 15-5 mark this spring.

The late George Steinbrenner didn’t believe in the importance of team chemistry, but he didn’t know this Blue Devil baseball team. “Clubhouse harmony and team chemistry are trite, overused phrases,” the Yankees owner said. “Winning takes care of everything. Winning is chemistry.”

Mr. Steinbrenner was right and he was wrong. There is undoubtedly much to be said about the value of team chemistry, especially on the high school level. But it’s also true that winning, more than anything else, seems to have a way of bringing a team closer together.

The nucleus of the 2021 Blue Devil squad has been playing together an awfully long time and they all seem to have mastered their assigned roles and been able to create an unbreakable bond that has helped propel Huntington to the brink of the county championship.

“I think the whole team has so much chemistry combined with amazing talent that we just play great together,” said Dylan Schnitzer, who is batting .500 with 33 hits. “The key is definitely staying within ourselves and focusing on the moment at hand. I’m feeling extremely excited about playing in the championship game.”

Kyle Colleluori will lead the Blue Devils into Friday’s game as Huntington’s starting pitcher. The big right hander is a control specialist. In 39.2 innings he has walked only nine batters and fanned 30. He is 5-1 with a 2.12 earned run average. He’s also one of Suffolk’s hottest hitters, with 35 hits, 16 doubles, 26 runs batted in, 21 runs scored and a .486 average.

The Blue Devils were pumped up following their semifinal round victory over Northport on Wednesday afternoon. Head coach Billy Harris and trusted assistant Rob Cappas have assembled a great squad by any measure.

“I really think that we are winning all these game because of the special group of guys we have in that dugout,” said Jaden Italiano, who is batting .328. “It seems that somehow, someway somebody’s always picking the next guy up. If the top of the order isn’t hitting then the bottom of the order is producing runs and vice versa and same goes for our defense if someone makes an error then our pitchers are coming up with big strikeouts or someone else is making a great play. Although we didn’t need anyone to pick anyone up today for the most part, I think that’s what being a team is all about and what makes the best teams. I also think a large part of it is that this group of seniors is hungry this year. We didn’t have a season last year so we’re making the most of our final season this year. This hungry attitude translates to our aggressive approach in games, such as the one displayed today as we jumped out to a 9-0 lead in the very first inning.”

No one is about to underestimate Bay Shore, which is a very good team. Huntington’s coaching staff was happy with the team’s practice on Thursday and they believe the Blue Devils are ready.

“We’re all focusing on winning the game that is in front of us,” said Alex Gonzalez, who caught a wicked line drive to left field for the final out against Northport. “We take one game at a time. We’re winning these games with our hitting and our pitching. Both have been extremely good this season.”

As the number of wins has mounted, the amount of fans turning out for him and away games has grown. The Blue Devils are playing in front of some of the largest crowds to ever watch Huntington baseball.

“We just go into every game with confidence and tons of energy,” Colleluori said. “We feel the same way as always; if we show up and play our game we will come out on top.”

Chris Segreti, the team’s slick shortstop, admitted the team is running at least in part on pure adrenalin, but having fun is also a big part of Huntington’s success. “We have all grown together like a family and just having a blast out there on the field,” he said. The teenager has blasted five homeruns, scored 31 times and sprayed out a team high 36 hits. He’s batting .480 and has been a master at getting on base.

“Everyone’s mentally in every game for seven innings,” said Aidan Bender, who is batting .353 and is also 3-1 pitching. “Every kid out here wants to win, which is a major key to our success. Everyone goes into every game with a mindset that we’re going to win. No team’s bats are hotter than ours right now. It’s a true brotherhood out here. We ain’t done yet though!”

Bellissimo was brought into the game with a big lead and he knew his job was simply to get the final outs needed to end it. “I was just thinking to keep throwing strikes and pitch like I usually do,” he said. “It was 13-2 when I came in so I wanted to keep it simple and win the game.”

No Huntington baseball team has ever won more than 16 games in a single season. When the Blue Devils take the field today it will be business as usual. The team plays every game the same way. There are no highs, no lows. Just good, solid fundamental baseball. 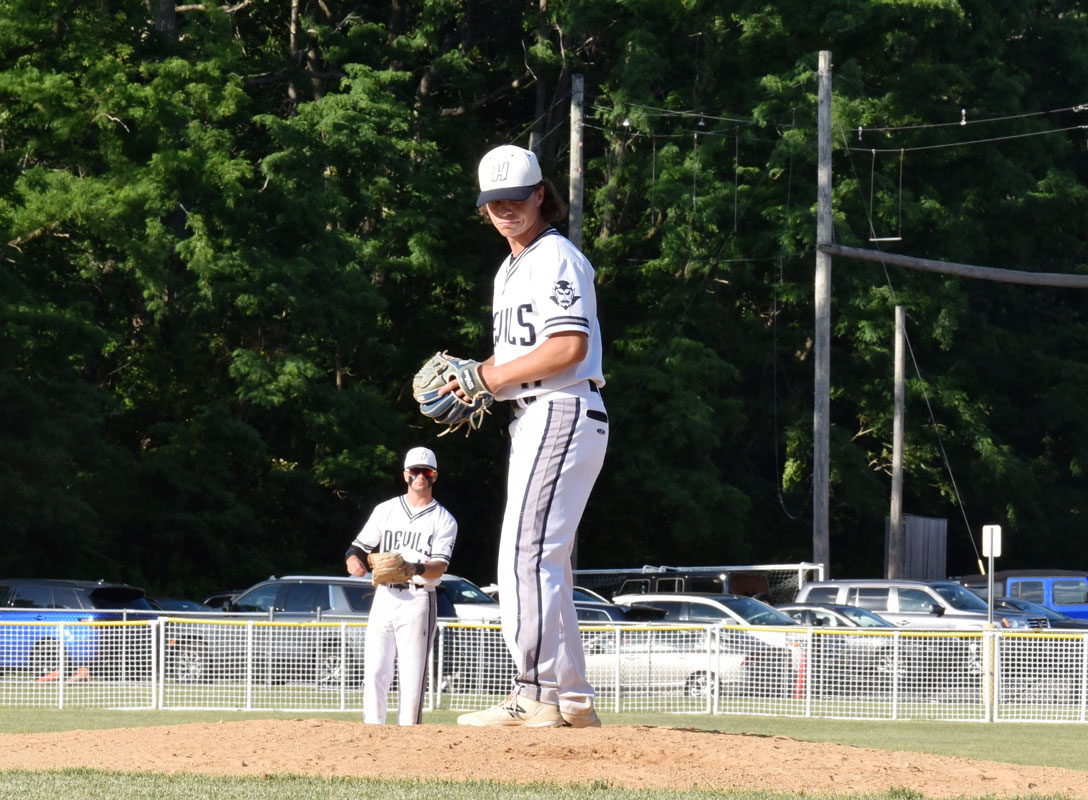 Senior Alex Bellissimo came out of the bullpen to get the final outs against Northport. 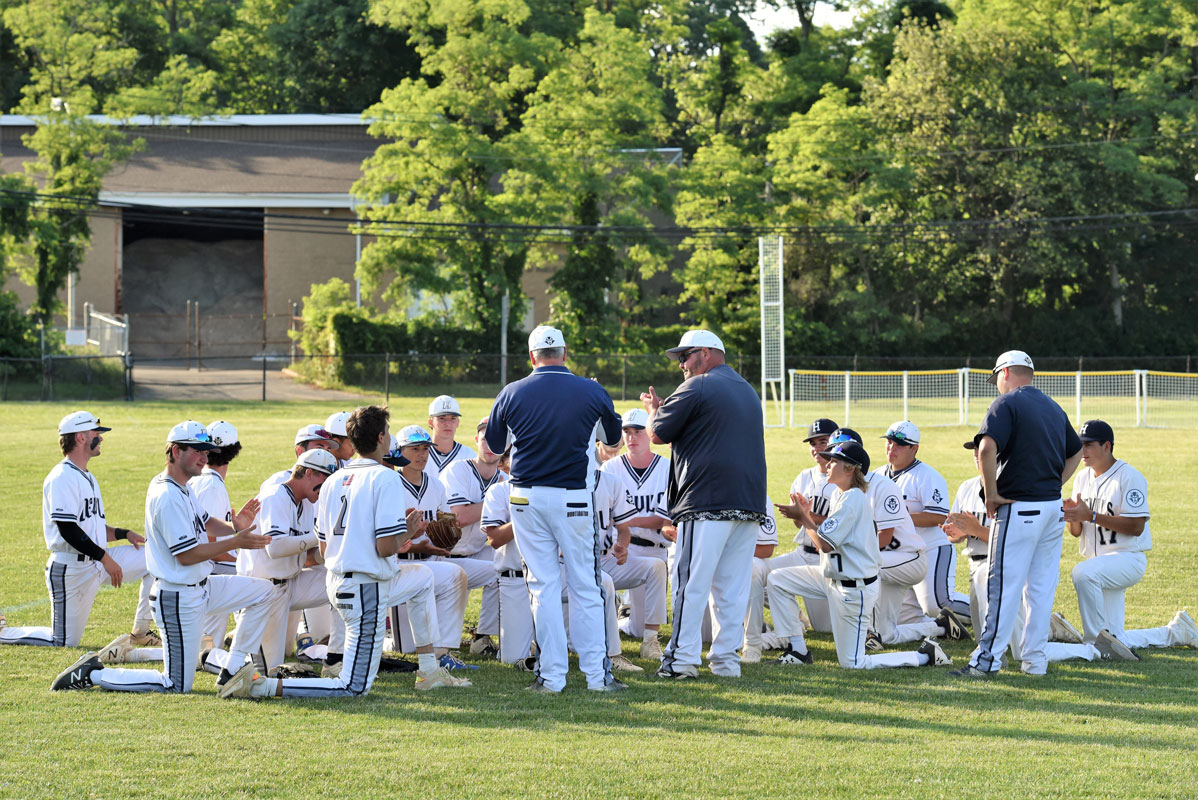 The Huntington baseball team will play for the county championship on Friday.

Senior Alex Bellissimo came out of the bullpen to get the final outs against Northport.

The Huntington baseball team will play for the county championship on Friday.