Joseph leaped an astonishing 22-11.50 feet in long jump to capture the first of his gold medals. The measurement ranks him first in Suffolk, third on Long Island and N. 4 in the state. A short time later, he was back to win a second gold medal and then a third.

Joseph later notched his third first place finish by anchoring Huntington’s 4x400m relay, which swept to victory in 3:24.96. Francis, Chirico and junior Quincy Chery ran the first three legs of the race. The Blue Devil relay is ranked No. 1 in both Suffolk and on Long Island and No. 2 in the state behind powerful Newburgh.

Kiviat would later anchor Huntington’s 4x800m relay, which crossed the finish line first in 8:07.44. The Blue Devils are ranked No. 1 in Suffolk and on Long Island and No. 2 in the state.

Leading off the 4x800m relay was senior Andrew McKenzie, who has successfully battled back from an injury, following by James running the second leg and then third leg Aidan Heller.

“We shocked the county because we are known for the sprinting relays,” Huntington head coach Ronald E. Wilson said. “Everyone looked around and could not believe that we are leading in this event as well.”

Heller turned in many fine performances at the meet, including a fourth place finish in the steeplechase and a fifth place showing in the 3200m run. “Heller ran an awesome race in both events to add to Huntington’s points,” Wilson said. “He ran 9:57 in the 3200m run. We haven’t had a distance runner to dip under 10 minutes in years.  We are very proud of the progress he has made and the grit to be competitive in every event he enters. That was his first time running the steeple and he did an awesome job.”

• Mekai Butts threw a personal best of 49-10.25 feet in the shot put for third place. He also tossed the discus 124-05 feet for fifth place in that event.
• Justice King and Ryan Centeno both competed in the pentathlon with Centeno placing third and King taking fifth place.
• Julio Martinez led off Huntington’s 4x100m relay, which had some problems with baton exchanges and couldn’t recover. Cameron Santa-Maria, Chad Rowe and anchor Tyriek Mays-McKoy ran the second, third and fourth legs, respectively. They managed to still place second in the event in 43.43 seconds, just off Connetquot’s winning time. Huntington’s early season time of 43.37 seconds still ranks them No. 1 in the county, No. 2 on Long Island and No. 11 in New York.  “They can definitely run under 43 seconds in the event,” Wilson said. “We just have to work on a few things and they will be okay.”
• Martinez also posted some outstanding times in the 100m and 200m dashes. He took second in the 100m in 11.01 seconds and was third in the 200m in 22.24 seconds. Martinez is No. 4 in Suffolk, No. 5 on Long Island and No. 13 in the state in the 100m and No. 4 in Suffolk and No. 6 on Long Island in the 200m. He’s also ranked in the 400m dash.
• In the high jump, it was the freshmen who garnered points for Huntington. Johan Fajardo jumped 5-06 feet for third place and Roberto Rodriquez jumped 5-04 feet for sixth.

“It was a great day to be a Blue Devil,” Wilson said.

The Blue Devils will compete in the individual county championships on Friday at Comsewogue and then again in the Long Island championships at St. Anthony’s on June 24. 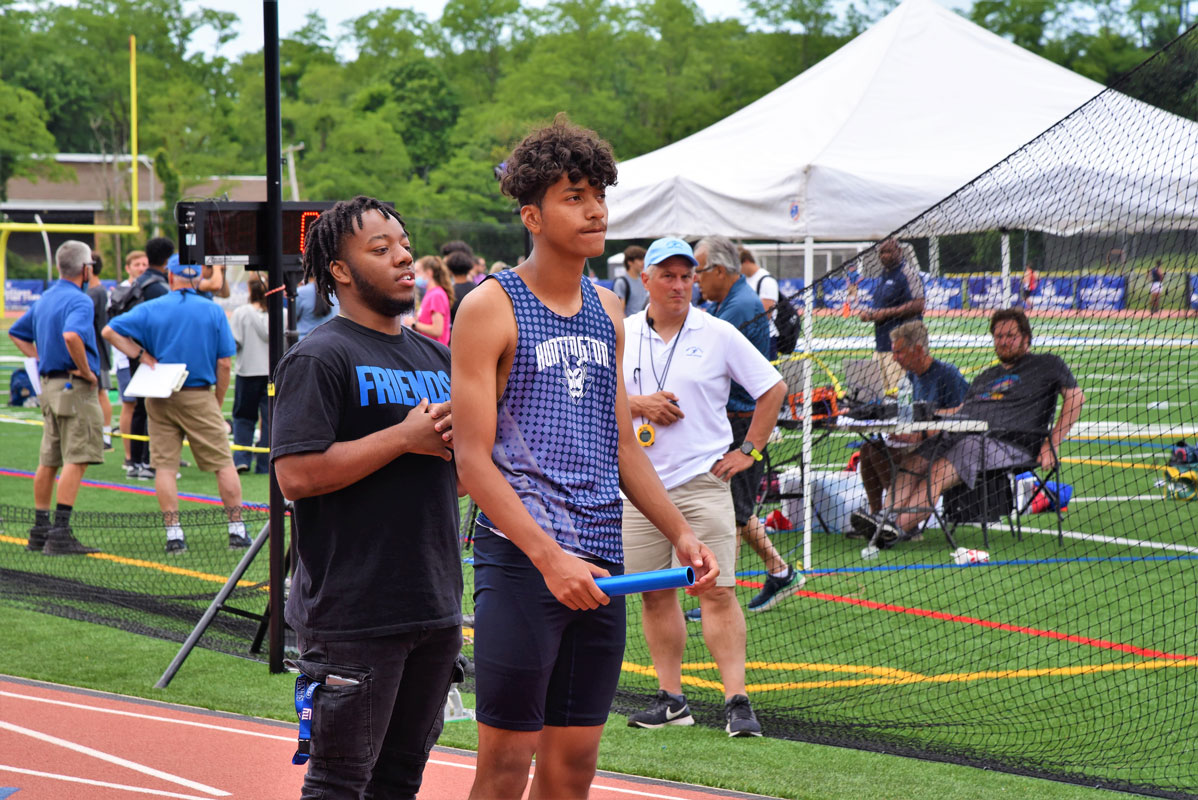 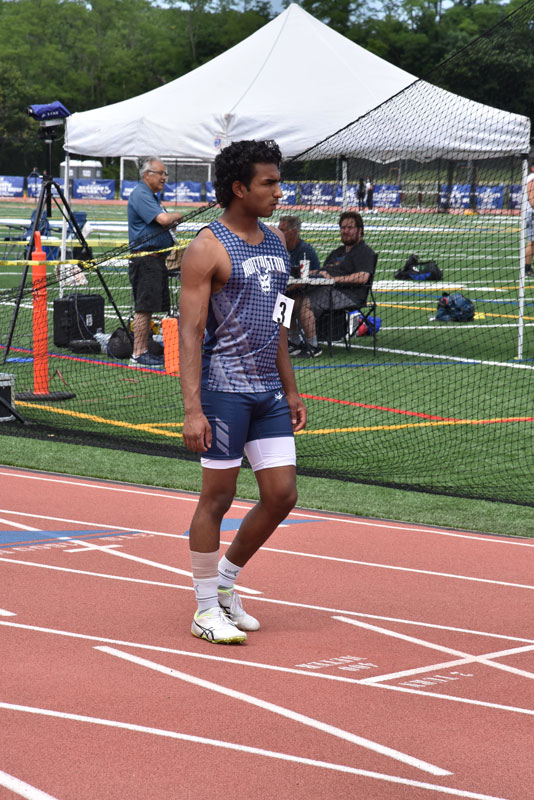 Senior Samir Rathore at the starting line for the 400m hurdles 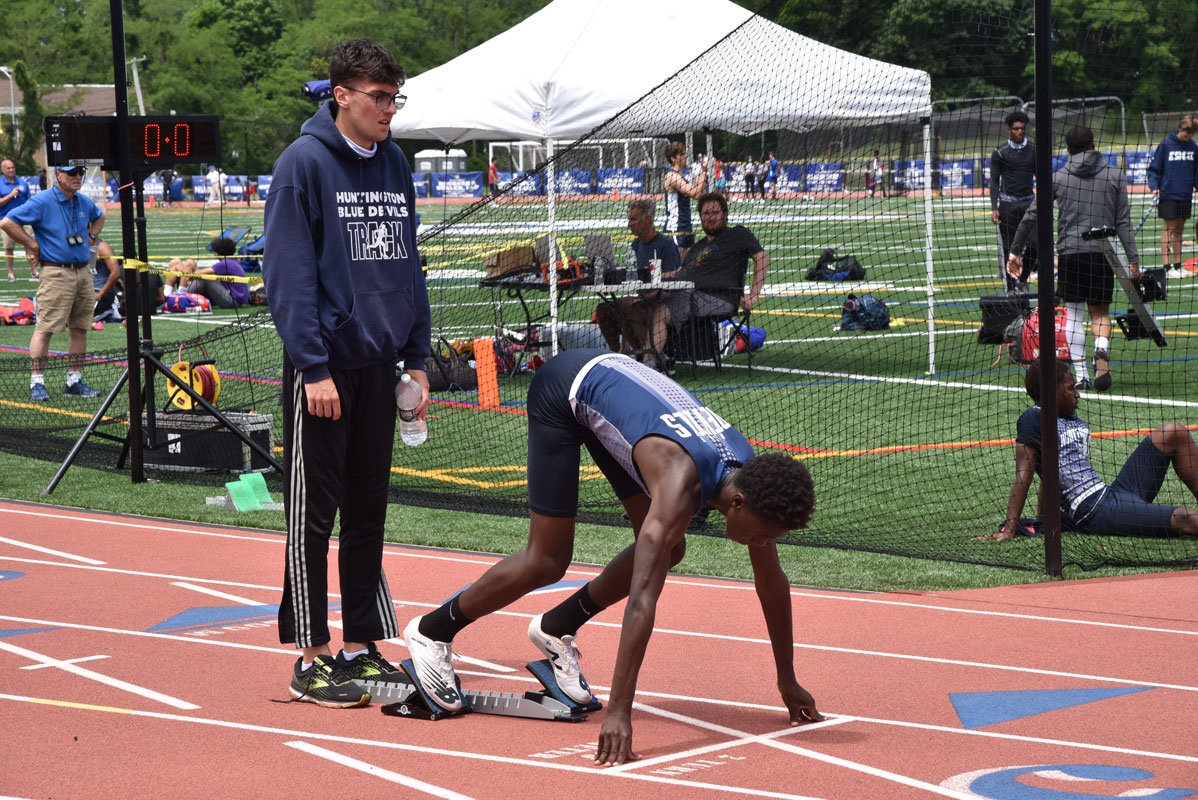 Quincy Chery gets set in the blocks as CJ Kiviat holds them steady. 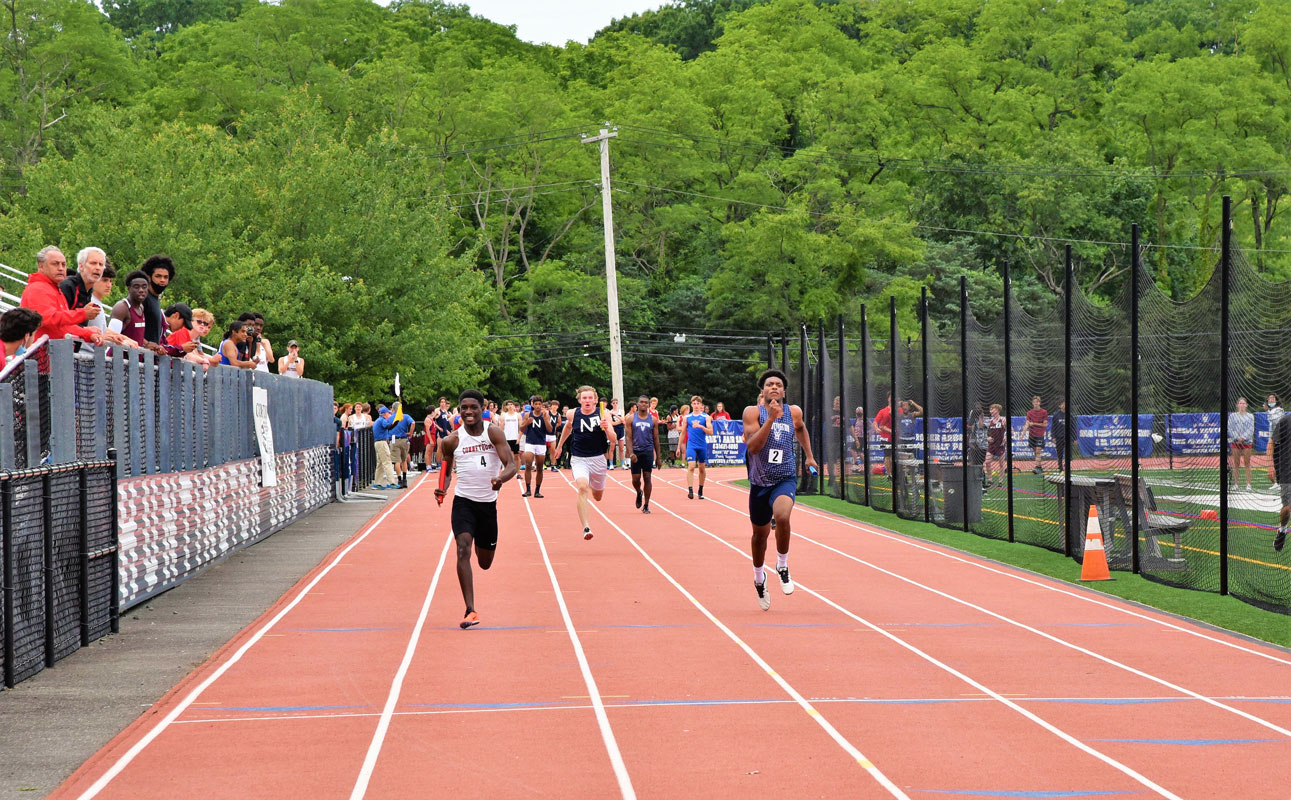 Senior Samir Rathore at the starting line for the 400m hurdles

Quincy Chery gets set in the blocks as CJ Kiviat holds them steady.