Niurca Chabla-Leon loves the world of art. She is so taken by it that the Huntington High School Class of 2021 member plans to study at Adelphi University in preparation for a career as an art teacher.

“Niurca Chabla-Leon is without a doubt one of the most intriguing young people I have ever met,” said Bernadette Walsh, the high school’s college counselor. “Her passionate drive and unparalleled spirit separate her from her peers in a number of ways. She has a gift for understanding, applying and utilizing several languages in her everyday life.” 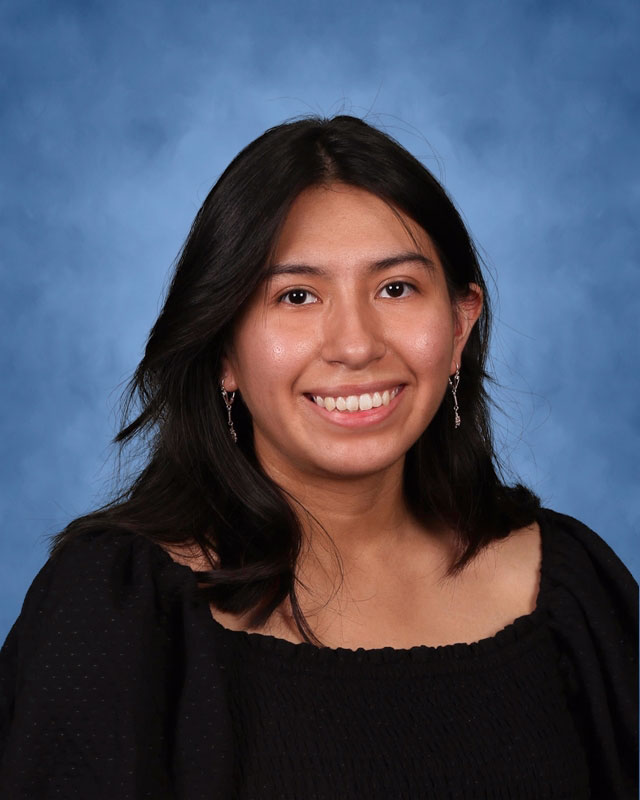 “Niurca is a busy young woman,” Mrs. Walsh said. “She volunteers regularly at her church’s Sunday school program. And, here at Huntington, she has been a well-known student through her involvement in the Art and National Honor Societies as well as the Habitat for Humanity club chapter.”

Mr. Potter passed away suddenly in November 2010, dealing a terrible blow to his family, colleagues and students. The Associated Teachers of Huntington, the professional organization of the district’s teachers, decided to create a scholarship to honor the cherished faculty member’s devotion to the young people of the community.

Ms. Chabla-Leon is this year’s recipient of the $1,000 Robert Potter Memorial Scholarship Award. The criteria for receiving the scholarship states the recipient needs to display an ability to think creatively and to express their unique “voice” in their work, along with showing perseverance and growth in school work, a willingness to challenge oneself and an ability to inspire others.

“Niurca is a go-getter,” Mrs. Walsh said. “When she has her mind and her heart set, she achieves greatness. I am often in awe of the maturity and stability Niurca displays while multitasking her many responsibilities, including caring for her younger siblings and cousins on a daily basis. In fact, when Huntington High School was completely remote due to COVID-19, Niurca was the driving force behind the academic success of her siblings and cousin as she assisted each of them with their virtual learning all while balancing her own. She’s incredible.”

ATH Vice President Joseph Cohen said that Mr. Potter “epitomized the true educator and believed that all of us, teachers, parents and students alike, should work to inspire those around us. The selection committee that reviewed this year’s scholarship applications believed that Ms. Ms. Chabla-Leon has the talent and enthusiasm to carry Mr. Potter’s torch forward into the world.”

When Mr. Potter passed away suddenly, teachers and students reacted with stunned disbelief. He left behind his wife, Jan and young daughter Isabel. Described as a “brilliant art teacher and one of the most remarkable people I have ever had the privilege to know and work with,” by then district director of fine and performing arts Joan R. Fretz, Mr. Potter left an indelible impression on the young people in his class.

When a student would hear that Mr. Potter would be their ceramics teacher, a smile would typically come across their face. The more students learned about the creative and caring teacher the more they wanted to be in his class.

Mr. Potter, who taught ceramics (pottery) and sculpture, began working in Huntington in September 2006 after embarking on a major change in his career as an artist. After completing a Bachelor of Fine Arts degree at Pratt Institute, he worked for 17 years for famed artist Peter Maxx.

While employed as a practicing sculptor and studying for a master’s degree in art education at Adelphi University, Mr. Potter came to Huntington High School to observe art teacher Kristin Singer’s class. “We knew immediately that he was an incredible artist and teacher,” Mrs. Singer said. “We followed his career and after student teaching, we were thrilled to welcome him to our Huntington art faculty.”

Huntington art teacher Ayallah Jeddah came to Huntington the same year as Mr. Potter. “He was such an inspiration for all of us,” Ms. Jeddah said. “He cared so deeply about his kids and pushed them to express themselves. He made me want to be a better teacher. He was a true teacher through and through.”

Although he was only in his fifth year of teaching at the school, Mr. Potter had developed a notable devotion to everyone at Huntington High School. “He was a great listener and took time to help everyone with anything that they needed,” Ms. Fretz said. “He embraced every child that entered his classroom and took special interest in those who were not succeeding elsewhere. Everyone had a home in Robert Potter’s classroom. Students found a constructive and meaningful way of expressing themselves there. He encouraged them to create art that was symbolic of their thoughts, interests and beliefs.”

“Teaching was his calling,” Mrs. Singer said. “Rob was meant to be a teacher. He was so passionate about his work and helped his students think on a whole different level. In the short four and a half years he was with us, he touched so many lives.”

The Robert Potter scholarship award stands today as one of the most prestigious that any Huntington senior can win.