Chad Rowe is one of the proudest members of Huntington High School’s Class of 2021. He’s worn a Blue Devil uniform in all three sports seasons for the past four years and he’s done it with pride. As he goes about his final year in the building, he’s still finding plenty of things to keep his attention and stay busy.

Like all of his classmates, the senior has his favorite class. “African American Studies is a class that constantly tests how I think about the American government and how it runs and Mr. [Kenneth] Donovan is great at challenging how I think,” Mr. Rowe said. “I look forward to working with him.” 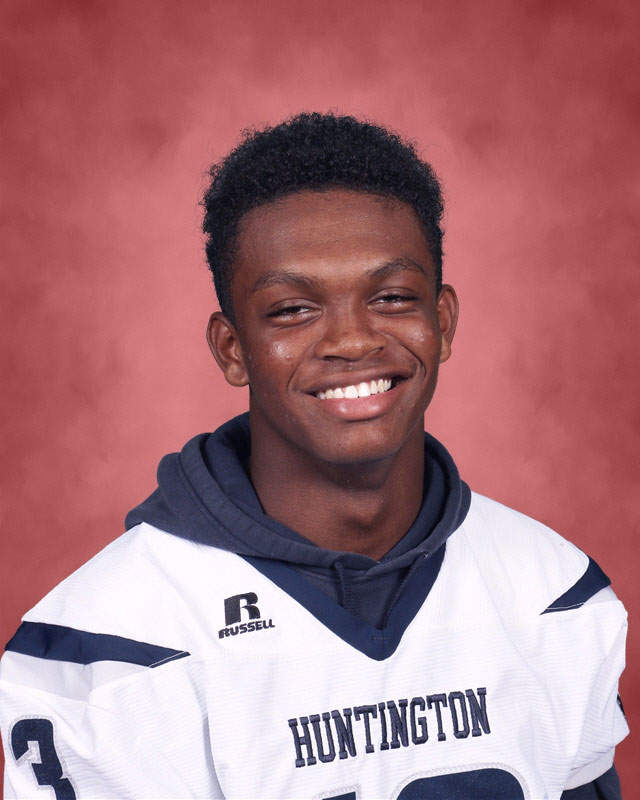 The teenager is an All-Division football player for the Blue Devils. He is currently engaged in pre-season conditioning with his teammates and is looking forward to making his final season in Huntington his best.

Last winter, Mr. Rowe gave up basketball and ran on the Blue Devil indoor track team. He was also on the outdoor track team when the COVID-19 pandemic ended the season shortly after it started. He plans to return to the hardcourt in January with the blessing of both track coach Ron Wilson and basketball coach Jordan Ioviero.

“I plan to get involved in basketball this year,” Mr. Rowe said. “I want to try and help them become better and intend to work hard with the coach.”

Mr. Rowe considers Anthony Joseph, Nasir Youngblood and Tyriek Mays-McKoy to be his closest friends. “They help me have fun and get through the school year,” he said.

The senior is an easygoing sort of fellow. Mr. Rowe has developed positive relationships with many teachers, including and Rebecca Arlin, Donna Nugent, Michael Graziano, Patricia Anson, Erik Bruckbauer, Peter Fusco. “They have really help me get through school,” he said.

The teenager has also found a mentor. “Mrs. Arlin has been a teacher I could talk to about anything and she will be totally honest with me no matter what the topic,” Mr. Rowe said. “She has helped me be a better me and work harder than I knew I could and helped me get my grades to where they needed to be.”

Mr. Rowe’s advice for incoming freshmen? “I will tell them for sure that they need to take advantage of time because it sure does not wait for them and it will leave them in the dust,” he said.

As Blue Devil athletics begin to heat up with pre-season training and the start of official practice for winter sports on January 4, Mr. Rowe growing more excited by the day. He plans to make his mark in all three sports before he graduates next June.