The Huntington High School Alumni Association traces its history back to 1886. The current slate of officers, which helped rejuvenate the organization is stepping aside after many years of hard work.

A call has gone out to the tens of thousands of Huntington alumni to consider stepping up and filling the positions of president, vice-president, treasurer and recording secretary. Without a new group of alums prepared to assume leadership, the organization is in danger of disbanding.

Send a message via e-mail to alumni@huntingtonhighalumni.org if you are interested in getting involved and keeping the organization viable.

The Huntington High School Alumni Association has one of the longest histories of any such organization in the state – perhaps the longest. Research has traced the founding of the alumni group to a meeting that was held on May 25, 1886. The documentation is solid, consisting of the handwritten minutes of the session.

“In response to a circular sent out by a committee of graduates of the Huntington High School, a meeting was held at the school rooms on May 25, 1886 to make arrangements for the formation of an Alumni Association,” states the handwritten account contained in a journal found among the collection of artifacts housed in Huntington’s School Heritage Museum.

“A committee was appointed with full powers to carry out the desires of those present and make all necessary arrangements,” states the account. “This committee met at the residence of Rev. S.J. Carter on Monday evening, May 31 and adopted a constitution for submission to the Association. They called another meeting to be held at the same place on Thursday, June 3. At this meeting, the various subcommittees received their final instructions and all arrangements were completed for the meeting to be held June 28.”

The Alumni Association’s first “annual” meeting was held in the old Union School on Main Street on June 28 at 8 p.m. “About one hundred of the graduates were present and answered to the roll call of their names,” states the 1886 account. “The names of those present were recorded by the secretary, Mr. Douglas Conklin. The constitution, as drawn up, was read by the secretary.

Following adoption of the constitution, Class of 1864 member Charles E. Shepard was elected as the organization’s first president. George C. Hendrickson (Class of 1871) and Mrs. Samuel T. Carter, Jr. (Class of 1882) were both chosen as vice presidents. Jarvis E. Smith (Class of 1885) was elected to serve as secretary and Harry H. Funnell (Class of 1877) was tapped as the treasurer.

Once the Alumni Association’s first ever business meeting had wrapped up, a social complete with entertainment kicked off. The spouses of married graduates were invited along with members of the Huntington Board of Education and current faculty members.

The social began with the alumni members singing “Auld Lang Syne” in chorus. Letters and telegrams from alums unable to make the gathering were then read to the crowd. Several soloists and violinists performed between reports from each individual graduating class. The social included refreshments, sandwiches, cake and coffee.

Algernon S. Higgins, the founding principal of the Union School when it opened in November1858 also spoke at that first Alumni Association meeting, delivering “a very interesting address,” according to the handwritten minutes. (The Union School was renamed Huntington High School in 1897. In addition to his duties as principal, Mr. Higgins also taught most subjects.

The organization was officially named “The Alumni Association of the Huntington Union School.” Article III of the first constitution stated that “any graduate of the school shall be eligible to membership in the Association.”

Early in its history, the Association debated and defeated a motion to allow those who had attended the school, but failed to graduate to become members of the organization.

The first commencement from Huntington Union School was held Friday, July 18, 1862 at 2 p.m. Since then the community has gathered annually to celebrate the awarding of coveted diplomas. That first graduating class consisted of just six students. The number of seniors would grow over the years, reaching nearly 750 in the mid-1970’s before declining sharply as school enrollments shrunk all across the state.

In 1862, each of the six seniors either gave a speech or read an essay and each time they were followed by some sort of musical selection, either instrumental or a song. The first class of graduates included Charles H. Baldwin, Emma F. Downs, John S. Sherrill, James T. McKay, Ella J. Conklin and valedictorian William G. Nicoll, whose attorney father, William Nicoll presented the diplomas that day in his role as commissioner of common schools.

The following year, 1863, also saw six students earning diplomas, including four from Huntington and one each from Yaphank and Islip. Thus, a yearly tradition was born.

Huntington’s 50th commencement was held on Tuesday, June 20, 1911 at 8:15 p.m. in Assembly Hall at the old high school on Main Street. The night began with the Rev. Charles E. Cragg giving an invocation and following with the singing of “The Evening Dance” by the girls’ chorus. Three salutatory addresses were given by seniors Leroy Randle Grumman (“The Aeroplane”), Nettie May Carll (“Nature Secrets by Huntington Road-Sides”) and Laura Brewster Kissam (“The Boy Scouts of America”). The chorus followed with a rendition of Brahms “Lullaby” before senior George Clifton Sammis addressed the crowd on “The Conservation of Our Forests.”

Mr. Grumman would go on to start an aircraft company in his Huntington garage. It ultimately developed planes that helped the U.S. win World War II and later created the lunar escape module that made a moon landing possible.

At that same 1911 commencement, senior Ella Newman spoke on “Amusement, a National Necessity” and the girls’ chorus followed by singing “The Owl and the Pussy Cat.” Senior Camillus Rogers Trainer then gave a stirring address on “Stonewall Jackson, A Man.”

The honor of giving the valedictory address in 1911 fell to Sarah Louise Funnell, who spoke about “The Land of the Impossible.” Prizes were then awarded to Huntington’s 50th graduating class and diplomas were presented. The chorus sang one final song – “My Mammy’s Voice” before the closing benediction.

Fifty years later, Huntington High School held its centennial commencement in the auditorium on Tuesday, June 27, 1961 at 8:15 p.m. More than 330 seniors marched to their seats while the band, conducted by music teacher Rufus E. Kern, played “Pomp and Circumstance.” The full house sang the “Star Spangled Banner” before Rev. Lloyd A. Duren gave the invocation.

Mr. Finley presented the Class of 1961 and Alexander Wilson, president of the Huntington Board of Education, followed with a short speech. The high school band then played “Nabucco Overture” by Verdi before the presentation of diplomas was made. The crowd followed that by singing the school’s alma mater song. The evening concluded with a benediction and the band playing Sousa’s “Corcoran Cadets” as the seniors marched out of the auditorium.

In commemoration of the 100th graduating class, Huntington village merchants chipped in and paid for a monument to be placed in the ground in a grassy area in front of Huntington High School. It still sits there today, although grass frequently covers it and most pedestrians aren’t aware of its presence.

Visit either http://www.huntingtonhighalumni.org/ or https://www.facebook.com/huntingtonhighschoolalumni/ to learn more about the current Huntington High School Alumni Association. 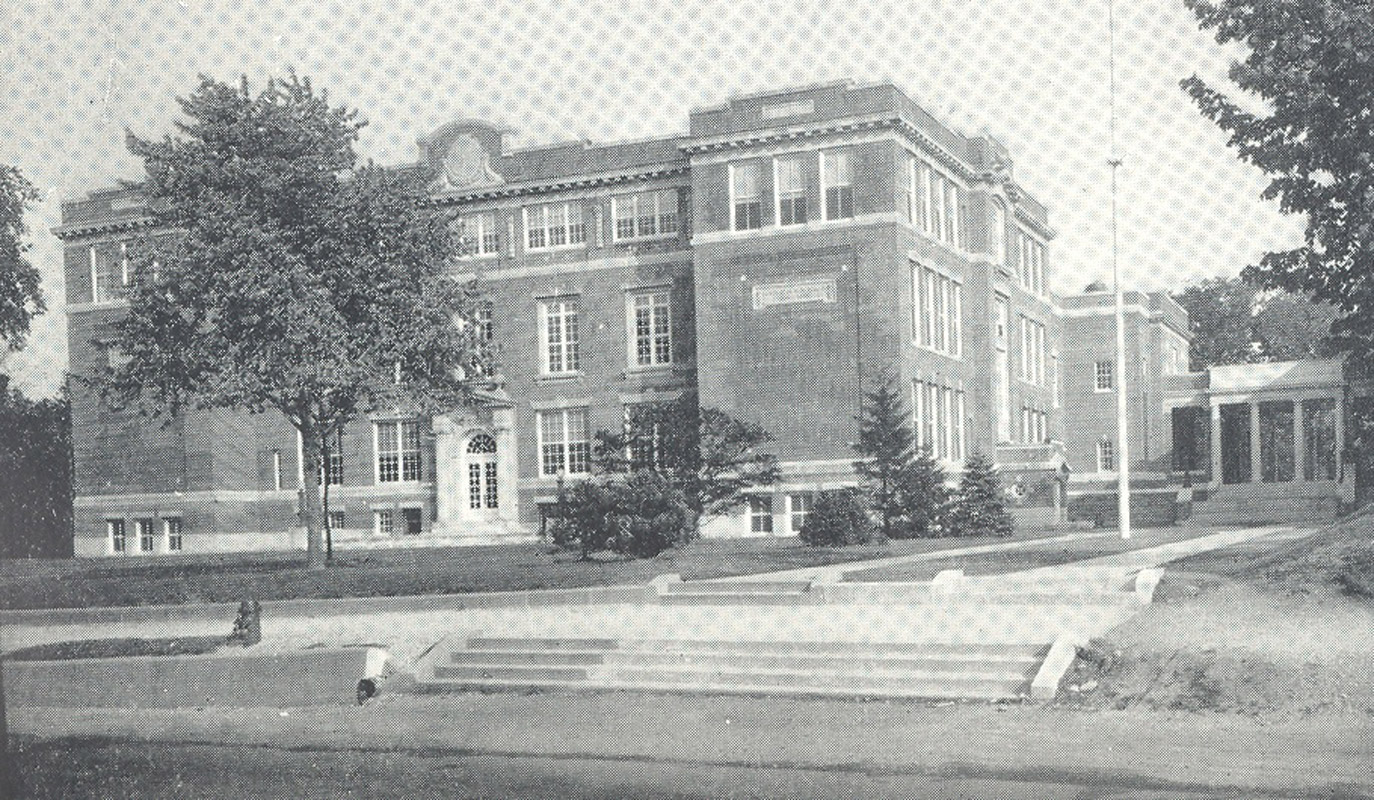 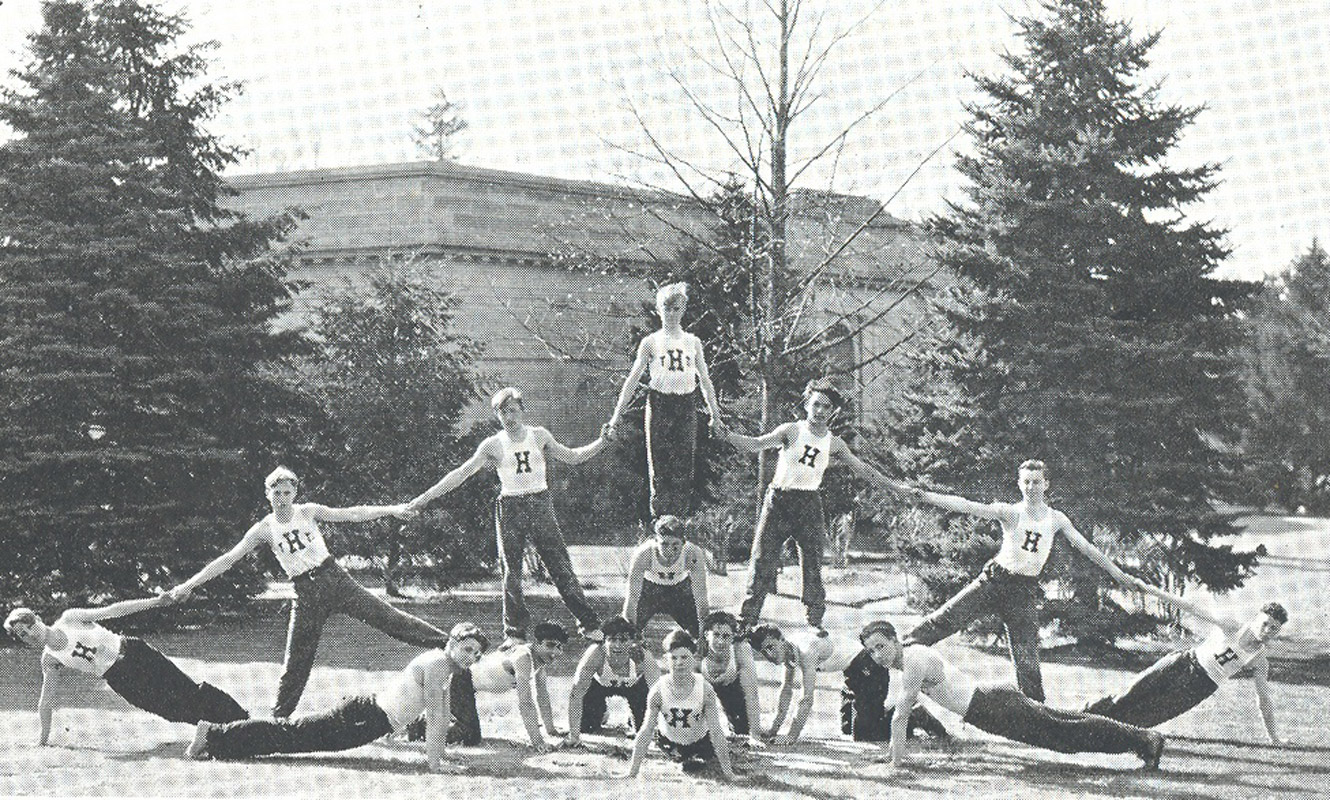 Huntington's tumbling team in a 1934 photo taken in Heckscher Park.

Huntington's tumbling team in a 1934 photo taken in Heckscher Park.