If the Huntington High School video arts program had its own Hall of Fame, Charlie Ehrman would be one of its leading members. The Class of 2017 member captured national recognition for his exceptional filmmaking abilities and he’s only just begun to show the world his talents.

The teenager has spent the past four years impressing his teachers, classmates and the judges at dozens of contests and film festivals. Mr. Ehrman has moved on and moved away; 3,000 miles away from home to be precise. He’s a freshman at Cal State Northridge.

“So far, school at Cal State Northridge has been a wonderful experience,” Mr. Ehrman said. “I am taking 15 units, ranging from photography, human geography and introduction to mass communication arts to public speaking with a focus on Central American immigrants. Along with that, there are many extracurricular activities available here.” 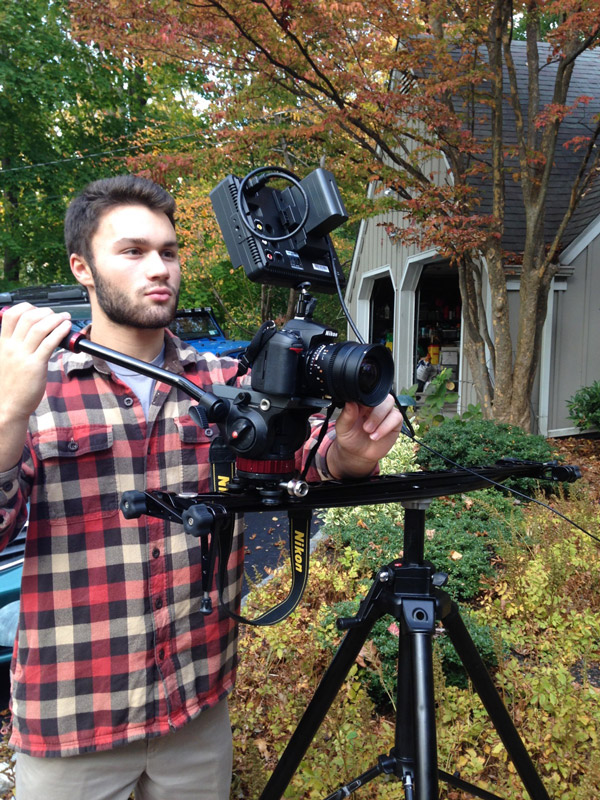 Mr. Ehrman has already garnered a long list of awards and honors for his remarkable work. Well spoken, friendly and dedicated to his craft, he gained the respect and affection of Huntington’s teachers as well as his classmates. He worked especially closely with art teacher Heather Swan, who leads the high school’s video arts program.

The Huntington alum has hit the ground running in California. “I will be working as a production assistant on a senior thesis film and I have joined a film club called ‘50mm,’ which is for filmmaker collaborations,” Mr. Ehrman said.

He even signed up for the Young Democrats club, which will allow him to stay politically active in Los Angeles. “I am currently working on a mini-documentary series that covers the effects in LA of rescinding DACA,” Mr. Ehrman said.

“Cal State Northridge offers so many incredible opportunities, it is proving to be the perfect fit for Charlie,” Mrs. Swan said. “From collaborating on a screenplay to working as a PA on a senior thesis, Charlie is already getting involved and making some great connections. I can’t wait to see what he creates next.”

One of the largest single campus colleges in the United States, Cal State Northridge boasts an overall enrollment of nearly 42,000 students. Founded in 1958, the college’s 358 acre campus sits in the middle of Los Angeles’ San Fernando Valley.

“Los Angeles has the vibrant film community that I expected and I look forward to what’s next,” Mr. Ehrman said.