Steve Yeh isn’t about to waste even a minute of his time at Cornell University. Huntington High School’s Class of 2017 valedictorian is registered for 20 credits in the fall semester of his freshman year.

Mr. Yeh is settling into life on Cornell’s picturesque campus. He’s even crossed paths several times with Huntington 2016 grads Sam Latt and Olivia Stamatatos, who was her class’ salutatorian. There are several other Huntington alums studying at the Upstate New York Ivy League school.

“It’s going well,” said Mr. Yeh about his first few weeks of college. “There’s a lot of work, but it’s worth it because I’m learning a lot. I’ve also met some really great friends the last two weeks and I’m looking forward to all the club events that are starting in the weeks to come.” 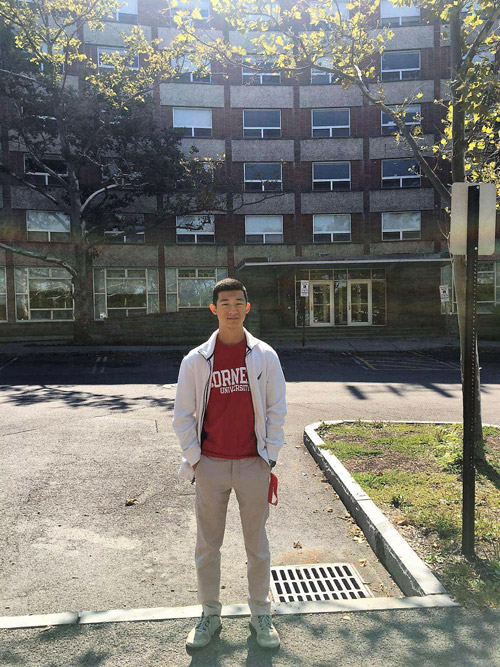 Steve Yeh outside his dorm on
Cornell's North Campus on Labor Day.

Mr. Yeh plans to join some clubs, too. “I’ve been to interest meetings for the Cornell Daily Sun, which is the student run newspaper and the International Affairs Society, which is similar to a Model UN,” he said. “Club Fest is this week, during which a lot of clubs will be showcasing what they are all about. So, I will attend that.”

A genial young man, Mr. Yeh exudes a sense of calmness. He attributes his success to date to “working hard, never giving up and keeping an open mind in all situations and circumstances.”

A National Merit finalist and Long Island Math Fair gold medalist, Mr. Yeh served as president of Huntington’s Math Honor Society and Chinese foreign exchange club, captain of the high school Quiz Bowl and Science Bowl teams, treasurer of the Spanish Honor Society and founder and president of the stocks analysis club. He even found time to volunteer as a homework helper at the Huntington Station branch of the Huntington Public Library.