Victoria Befumo is a creative and skilled young photographer and she works very hard at it. The Huntington High School sophomore recently completed a class assignment focused on a variety of camera angles in stunning fashion.

“For this specific project we had to take photos of an object from different angles that would capture its details,” Ms. Befumo said. “I always try make sure I enjoy what I take photos of so that they genuinely represent me. I thought about what I had that would be good for this project and I decided that my record player would be perfect. I thought that all the small details on the record player would look very nice close up.” 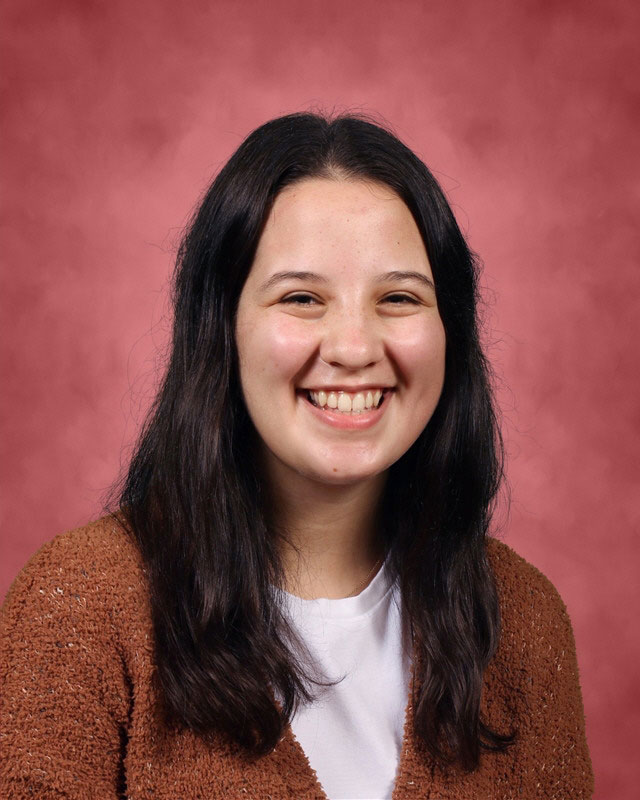 Those who take the time to really study the collage of photos will appreciate the nuances of the work. “In the top left corner and the middle picture I used a metal poster I have and started taking pictures of it from different angles,” Ms. Befumo said. “I love how you can see the details of the material and how the shadows add to the photo.”

The teenager used a Canon PowerShot SX50 HS for the photo shoot. “When I was younger I always loved taking photos everywhere I went,” Ms. Befumo said. “I knew I wanted to take photography classes as soon as I heard that the high school offered them. I wanted to be able to learn how to take photos that looked great with my camera instead of just quickly snapping a picture with my phone. This class is definitely my favorite this year and I am planning on taking Advanced Photo and Advanced Placement Photography within my next two years at the school.”

Photography class is one of the highlights of Ms. Befumo’s day. “It allows me to be creative and take control with how I think my photos look best and it doesn’t matter what others think,” she said. “I like that each photo comes from my personal perspective and everyone can have a different view on them. I am really looking forward to taking computer graphics next year. I think that I will enjoy the class a lot since I have an interest in designing and making things visually pleasing.”

The teenager is also musically inclined and she’s looking forward to participating in the high school’s wind ensemble under the guidance of teacher Brian Stellato, “because he gives us challenging, yet super interesting pieces to play,” she said. “He has such a positive attitude and I think that it comes through to us when he teaches.”

Ms. Befumo has a full plate of activities. She is participating in Habitat for Humanity, A World of Difference and the English Honor Society and Art Honor Society. She was recently informed that she will be inducted into the Tri-M Music Honor Society.

“I was in wind ensemble last year and will be continuing with it this year,” Ms. Befumo said. “I am an administrative assistant for Key Club and the co-secretary of the Grandfriends Club.”

A member of the Huntington Highsteppers competitive dance team, Ms. Befumo is a Natural Helper, too. It’s a program that she “absolutely adores,” she said. “Even just being on a call with everyone for our meetings brightens up my day. There is such a positive energy radiating from everybody and you just know everyone genuinely cares about you. I do miss having our weekend retreat and bonding with everyone. I think not being able to have that has pushed us to talk to each other more frequently and to make sure we are always checking up on one another.”

“A teacher who I am very close to is Mr. [Robert] Gilmor,” Ms. Befumo said. “I was able to meet him through Natural Helpers and Habitat for Humanity in my freshman year and I can count on him for everything. I am always going into his office to talk to him during my free periods or when I just need to get something off of my mind. Even on the days I am doing virtual school he makes and effort to see how I am doing. I know that he always will go above and beyond for anything I need.”

The teenager gets along well with the high school faculty. “Another teacher who I had who helped mentor me is Ms. [Alyssa] German,” Ms. Befumo said. “She has helped me throughout this year and whenever I need something academically I know I can count on her. She makes sure to continue to motivate me and encourage me to be the best that I can.”

The teenager gets along equally well with both classmates and teachers. Everyone respects her.

“A teacher that I had over the years who has really stood out to me is Mr. [Joseph] Cohen,” Ms. Befumo said. “I had him for freshman year biology and he is also involved in Natural Helpers. I felt that he ran his class different than some teachers in the way that he always kept our mental well-being as a first priority. He did not want to overwhelm us with work, but he got us to learn honors level material and somehow we had the best time ever while doing it. He made our class feel like a safe space and we all became very close with one another. If any of us was ever having a personal issue that interfered with our school work, Mr. Cohen was so understanding and he would do anything in his power to help out. Even now, whenever I see him in the halls we always have a nice conversation about whatever is going on and I think it is really important to form those types of relationships with teachers.”

The teenager’s advice to incoming ninth graders? “I would tell the incoming freshmen to do what makes them happy,” Ms. Befumo said. “Join the clubs that you want to join and not just follow what your friends are doing. Getting involved is great, but make sure it’s something you enjoy. You want to look back on high school and say ‘I really loved being in those clubs or teams’ rather than ‘I was on every team and club, but I was miserable the whole time.’ Also don’t be scared to try to make new friends and venture outside of your middle school friend group. There are so many people you will never have realized that will be so much like you until you talk to them.”

While graduation and college is more than two years away, Ms. Befumo has already given the future some thought.

“Right now I have no idea where I want to go for college,” Ms. Befumo said. “I know I still have a ton of time, but preferably somewhere somewhat far away. I am currently very interested in photography, of course, and also social media. My ideal job would probably be to run the social media accounts of businesses to help them advertise, design posts, logos and such for them.”

The teenager goes about her daily business in a way that impresses her classmates and teachers.

“So far, I would say my experience at Huntington is going okay,” Ms. Befumo said. “I am definitely excited for the years to come. I love the clubs I am in and I am always waiting for new opportunities to present themselves for me to continue to grow as a student.”