Julia Segal is a remarkable young woman. Her sharp intellect, ability to inspire and motivate and willingness to help anyone in need speaks for itself. The Huntington High School Class of 2020 member plans to double major in psychology and Spanish at Vassar College in preparation for a career as a bilingual child psychologist.

The Kiwanis Club of Huntington believes that Ms. Segal’s personality, drive and skill set is such that she has the potential to change the world and make it a better place for everyone. The organization presented the teenager with its coveted Quentin Sammis Memorial Scholarship Award in recognition of her work with the Key Club on the local and state levels.

“I feel incredibly honored to have received the Quentin Sammis Scholarship Award from the Huntington Kiwanis Club,” Ms. Segal said. “Looking at the immense impact that Mr. Sammis made on our town helped me to see that service to one’s community is timeless and has been ingrained in the Huntington community from the very beginning.”

The Quentin Sammis Memorial Scholarship Award, which carries a $1,000 stipend, is given to individuals who show “great passion” for service to their school and community, according to Kiwanis Club treasurer John Reilly, who announced the scholarship during Huntington High School’s senior academic awards ceremony, which was held in a virtual format due to the COVID-19 pandemic.

Ms. Segal has enjoyed a long association with Key Club, serving as a leader with Huntington High School’s chapter and taking on the role of lieutenant governor of Division 3 and chair of the membership committee of the New York District.

President of Huntington’s Spanish Honor Society and treasurer of the yearbook club, Ms. Segal was also a vocalist with the high school’s chamber choir and a capella chorus.

An Advanced Placement Scholar with Distinction, Ms. Segal attributes her success to surrounding herself with supportive people and choosing courses that challenge and interest her. Discovering ways to minimize stress and enjoying experiences in art and music have enhanced her overall education.

“Key Club was truly a highlight of my extracurricular involvement at Huntington and gave me more opportunities than I ever could have imagined,” Ms. Segal said. “From traveling upstate to District board meetings for my role on the District board, to helping to plan annual school-wide events with the rest of the Huntington Key Club, like the K-Factor talent show, there were so many unforgettable moments throughout the course of my high school career that never would have happened without Key Club. Key Club provides a home to anyone who wants to make a difference in the world and cares about seeing our school and the greater Huntington community prosper. I would not be where I am today without it!”

Born May 16, 1924, Quentin Byron Sammis was a member of Huntington’s Class of 1942. He went on to serve his country as an ensign in the United States Navy, earn an electrical engineering degree at Georgia School of Technology (he began his college studies at Rensselaer Polytechnic Institute) and an MBA at Harvard Business School, serve as owner and president of Coldwell Banker Sammis real estate and Sammis, Smith & Brush insurance and lead Friends World College as its president.

Kiwanis is a global organization of volunteers, dedicated to changing the world, one child and one community at a time. The local chapter believes that Ms. Segal has all the tools necessary to achieve great things and bring about positive change in society.

The Kiwanis Club considers the sponsorship of its service leadership programs, such as the Key Club to be among the most important projects it undertakes. The Key Club seeks to develop leadership, build character and provide service to the school and community.

Mr. Sammis founded the Townwide Fund of Huntington and the Huntington Arts Council and at one time or another was integrally involved in the YMCA, Huntington Hospital, the Visiting Nurse Service and the Family Service League. The Huntington High School graduate served in the US Navy during World War II and in the U.S. Navy Reserve for two decades.

Mr. Sammis, whose family has lived in Huntington village for generations dating to the Revolutionary War, passed away peacefully at home surrounded by his loved ones on August 29, 2007 after battling cancer for 13 months. He was 83. 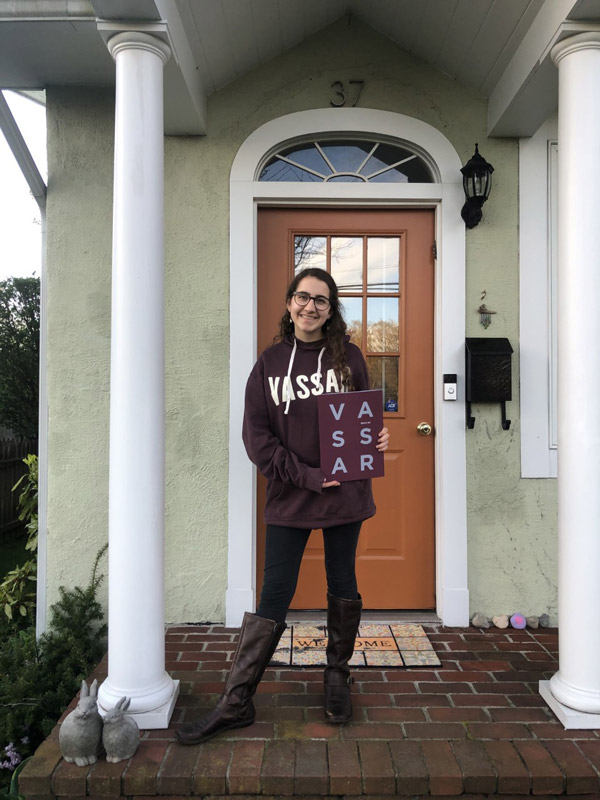 Julia Segal is thrilled to be a Vassar College freshman.

Julia Segal is thrilled to be a Vassar College freshman.