They can’t wait to get back on the court with each other. The Huntington High School girls’ tennis team is excited about returning to play. The season has been moved from the fall to the March-April time period due to the COVID-19 pandemic.

Last fall’s squad advanced to the county playoffs and compiled a record of 8-7. Young, Sansiviero and Baker each captured All-Division honors. Pitti and Drakulich were All-League.

The returnees are anxious to return to be back together. This year’s team will include several varsity newcomers, who will assume spots in the lineup vacated by last year’s graduating seniors.

“I have missed the season very much this fall, but I do think it will give us more time to practice and having a season later than never is still definitely better,” Drakulich said. “I think the team is looking very bright and everyone is staying optimistic and we just can’t wait to get on the courts all together.”

Jamie Fishlow is expected to return as the varsity head coach. Like his players, he can’t wait to be back on the court and pick up where the team left off last fall.

“I am so disappointed that we do not get a fall season this year,” Young said. “This team is so important to me; it’s really like one big family. We learn so much throughout the season and have so many laughs. All of my teammates are so talented and I really hope we get to play in March and April. With that being said, I think we are going to come out of this strong and prepared for the spring season. Coach Fishlow gives us great tennis workouts to do to keep in shape. I hope to start doing some small team practices soon and can’t wait to see everybody.”

The team will consist of a very solid nucleus with many proven players. Pitti was 8-7 in No. 2 singles and Drakulich went 8-6 in No. 4 singles last fall. Young, who teamed up with the now graduated Caitlyn Palermo in No. 1 doubles last year will once again play an integral role with the team. Sansiviero and Baker went 7-7 in No. 2 doubles and Balm and O’Heir were 7-7 in No. 3 doubles.

Everyone wishes there was never a COVID-19 public health crisis and that the season began as scheduled in late August, but the players have moved past that disappointment and are now looking ahead to the spring.

“I think that some season is better than no season,” O’Heir said. “The girls on the team are incredibly talented so I think that we’re in pretty good shape. All the girls are hardworking and we work as a team when practicing. I can’t wait to play with them again whether for a regular season or just practices.”

Fishlow expects the team to continues its overall improvement and for the Blue Devils to once again be very competitive. Last fall Huntington went 5-1 in meets that ended with a 4-3 score.

“I am obviously upset I will not be able to play tennis this fall, but the delay will give us extra time to practice and to get better as a team before the season,” Sansiviero said. “I am very excited to get back to playing.”

Players have been working out on their own or with each other during the absence of interscholastic athletics. They have been conditioning and also concentrating on their skills.

“I feel that because of the circumstances surrounding COVID-19, tennis being moved to March-April would be the best option,” Baker said. “Hopefully if we wait, we can have a season that looks more normal and the weather will be warmer than it is now.”

The Blue Devils are united in their optimism about the coming season. “Although I am disappointed that we could not have our season in the fall like usual, I am looking forward to getting the chance to play as a team again in March-April,” Balm said. “Our team ended strong last season and I believe that going into this season with the additional months of practice due to the move of the season, we will continue to be a strong team.”

Schedules haven’t been posted yet, but the Blue Devils said they will be ready to go when it comes time to take the court.

“I’m excited that we get a chance to play even if it is in the spring,” Pitti said. “We have been working out with each other since the summer, so we all have been practicing. Our team is hardworking and dedicated, I think we are going to be a real threat again some of the top schools.”

The Huntington junior varsity girls’ tennis team outperformed expectations considering the squad was shorthanded last fall. The Blue Devils had to forfeit individual matches during every meet, but the exceptional play of six teenagers still produced four wins and a tie; a major accomplishment.

Buffa excelled in No. 1 singles, compiling a 4-1 record. Geller and Tracy were sensational in No. 1 doubles, recording a 5-1 mark. Luca shined in No. 4 singles. Although the players were few in number, Mininni was very pleased with the athletes he worked with.

Mininni said the season highlight came in the last match on the schedule against Half Hollow Hills West. “We were able to pull it all together and win six of seven matches,” he said. “The girls’ hard work and effort paid off with this final game victory. I am very proud of all they have accomplished. They are a great bunch of girls who worked incredibly hard this year. They came together as a team.” 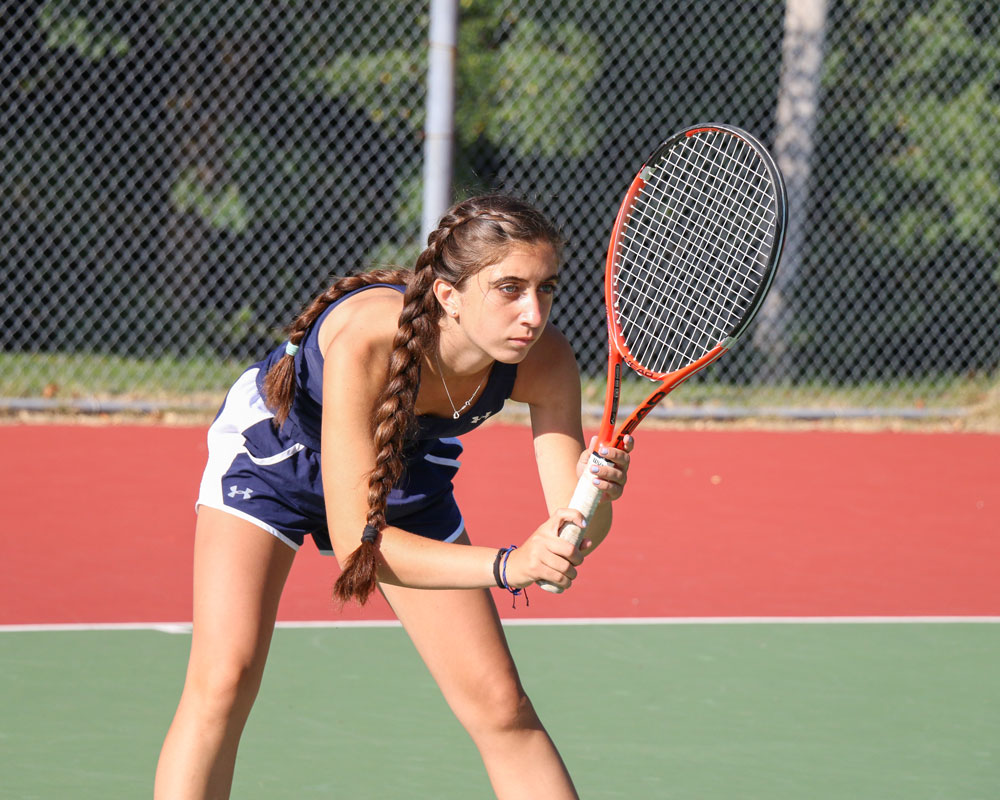 Lily O'Heir is a model of concentration for the Huntington girls' tennis team. 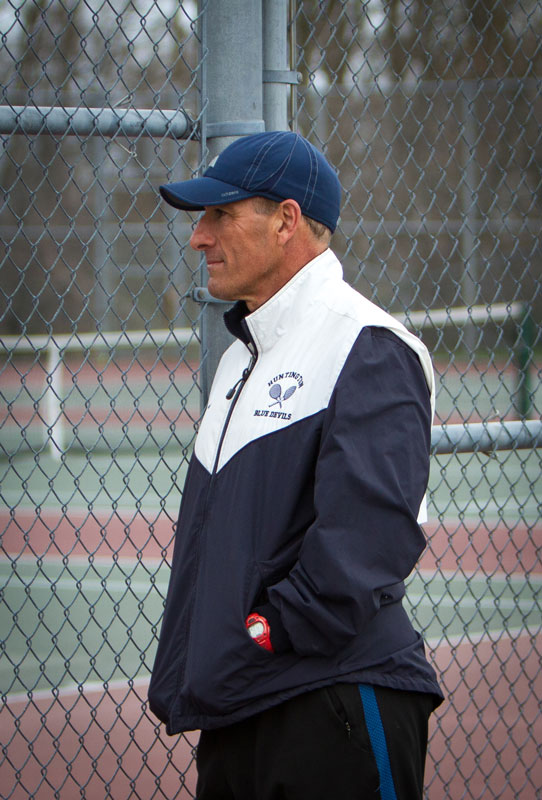 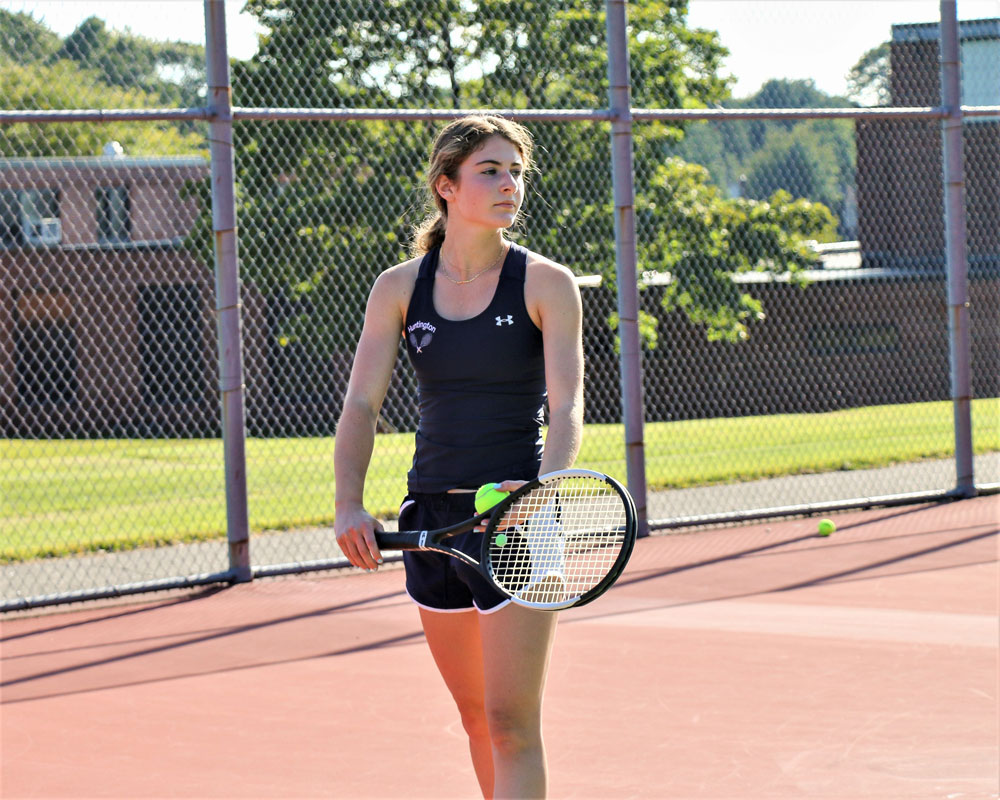 Tallulah Pitti is one of Huntington's top players.

Lily O'Heir is a model of concentration for the Huntington girls' tennis team.

Tallulah Pitti is one of Huntington's top players.