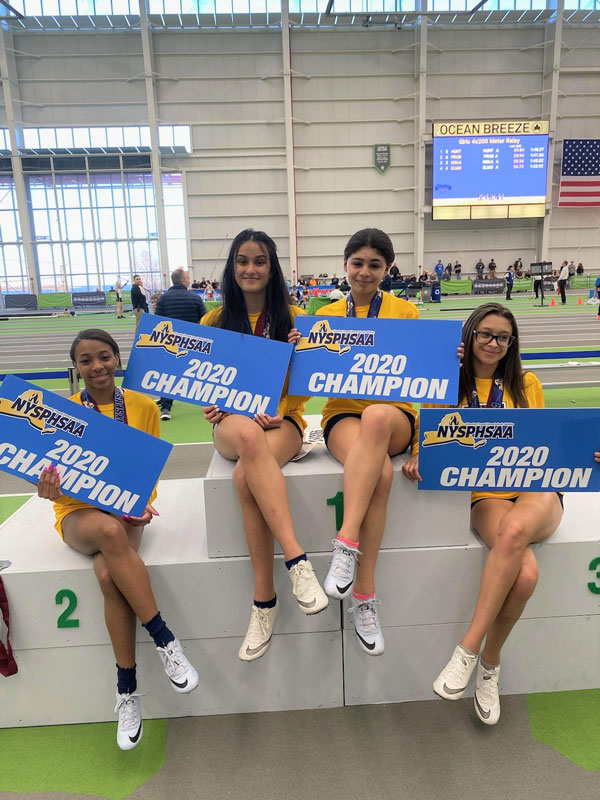 Batista was spectacular in winning gold in the 600m run in 1:32.05 before coming back and joining teammates Alicia Brooks, Hope Bilkey and Oliva Conte to capture the state crown in the 4x200m relay in the blistering time of 1:40.27, which set a new Section XI record.

“Today was a great day to be a Huntington coach,” said Mark Jackson, who coaches the Blue Devil girls’ squad along with Eddie Santos. “The girls’ and boys’ team sboth ran amazing. I knew once the boys won the girls wouldn’t want anything less than to win the whole thing. The girls had already run faster than the number one team in the state in the trials, so they wanted it more than anything.”

Brooks ran the first leg of the relay before handing the baton to Batista who passed it on to Bilkey before Conte ran the anchor leg to bring home the gold medal. While Brooks is a senior, Batista and Conte are only sophomores and Bilkey is just a freshman.

“It felt amazing to win NYSPHSAA and State Federation gold medals,” Brooks said. “Being first leg, I had to try to catch the person in front of me. Doing that, I was able to PR and get my team the advantage of getting the first handoff. I’m so glad that I can share these moments with my team before I leave to college.”

The Huntington girls’ admitted they were nervous prior to the race, but once the starting gun sounded, they went on autopilot.

This is a memory I will never forget,” Batista said. Being second leg, I had to get the lead for us and keep it, while doing that I was able to PR and get a bigger lead for us to win. I’m so happy I was able to share these memories with my team and they will be with me forever.”

The Blue Devils were pushed in the finals and it helped Huntington shattered the previous Suffolk record in the event.

“It’s a memory that I will never forget,” Bilkey said. “Being new to track and not having any experience and then being able to succeed with my teammates is the greatest feeling in the world. I could not be more proud of this family. We have come such long way. I can’t wait to dominate at the nationals.

It was Conte’s job to keep the lead on the final lap and she didn’t disappoint. “It was exhilarating being able to win states with my family,” the teenager said. “We each put in an unbelievable amount of effort throughout the season to get to where we are now; every loss and win. I am so proud of everyone and I can't wait to see what we will do next weekend.”

Huntington came into the state championships ranked No. 2 in the event, but despite the nerves, the athletes were all expecting to win gold and they did.

“The biggest thing that we did in preparation was bring the team and just rally them all together,” Jackson said. “The team ran amazing and we still hope to run even faster in the nationals next weekend than we ran today and not only become All-Americans, but bring home a national title.”

The Huntington boys’ also successfully defended the state relay crown they won last year, but with the graduation of Johnathan Smith, the Blue Devils added sophomore Tyriek Mays-McKoy to the team and he fit in perfectly with juniors CJ Kiviat and Anthony Joseph and senior Justin Stevens to bring home another state title in the event.

“I was a little nervous going into the final, but my teammates, being in this position before, helped me compose myself,” Mays-McKoy said. “I trusted all of them to do what they’ve done so many times before and they took care of business. I felt like this was a great experience to have under my belt and it helped me learn how to perform on a bigger stage.”

Sophomore Julio Martinez and junior Isaiah James also garnered All-State honors after running on the relay in the qualifying race to keep the legs of Kiviat and Stevens fresh for the finals.

“The 4x400 relay was a great race for us,” Stevens said. “We were a little bit off our season best, but we achieved our goal of setting a new meet record. I couldn’t be prouder of my teammates, especially Tyriek. It’s incredibly hard to be in the situation he was put in, running his first state championship with a team that won the year prior. He absolutely stepped up in the spotlight and ran a great race.”

The Blue Devils are the only team to ever dip below the 3:20 mark in the 4x400m relay in the history of the indoor state championships.

“We all went into it wanting it more than everyone else,” Kiviat said. “I’m so proud of how my teammates ran today. We all came here and did what we had to do.”

Kiviat and Stevens went head-to-head in the 600m run earlier in the day, running neck and neck with each other. Kiviat finished in 1:22.05 to take third in NYSPHSAA and fifth in the State Federation (which includes private, parochial and PSAL schools) with Stevens close behind in a time of 1:22.57 for fifth in NYSPHSAA and seventh in the State Federation.

The teammates push each other in every race and it brings out the best in them. “I think that I could’ve ran a better race, but I’m still proud that I got top five,” Kiviat said. “I just can’t believe that was my last 600 ever with Justin. I’m going to miss him so much when he goes off to Dartmouth College.”

Huntington boys’ head coach Ron Wilson and assistant coaches Eli Acosta and Haidee Ganz- Bonhurst along with volunteer assistant Onix Salva were all pleased with how the day unfolded. “It’s truly wonderful to be a Blue Devil,” Wilson said. 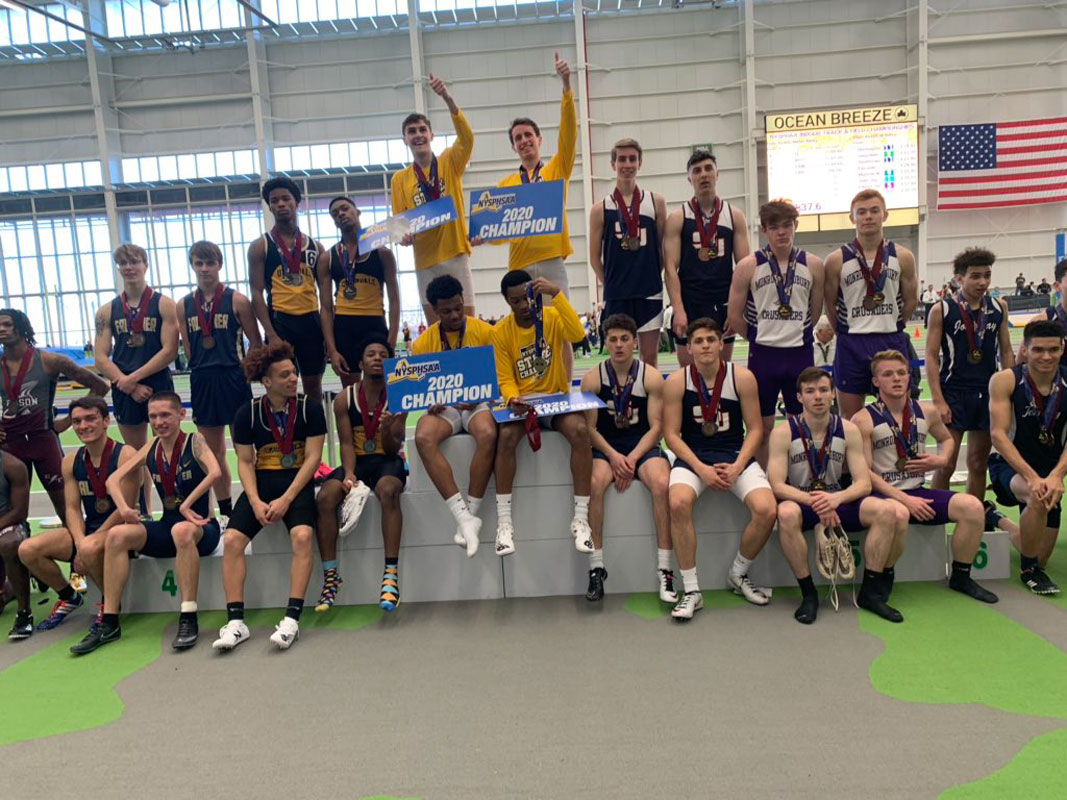 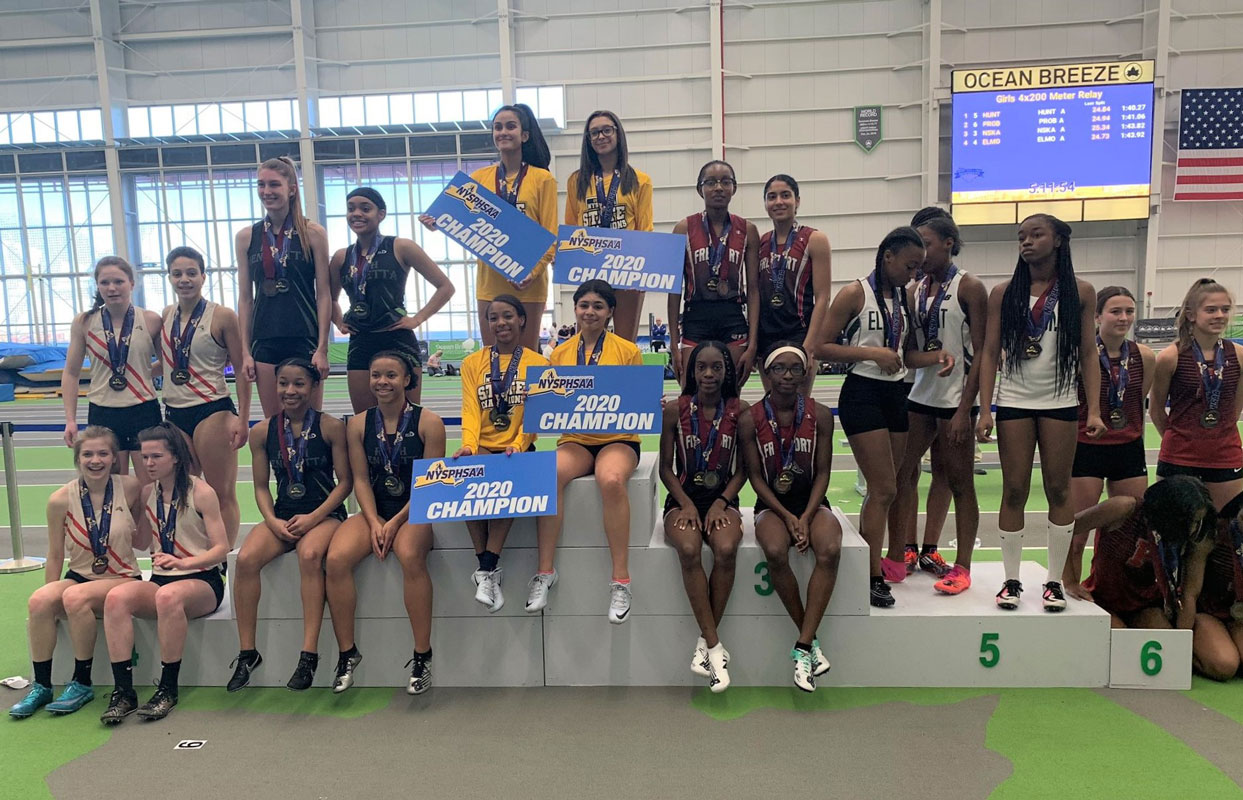 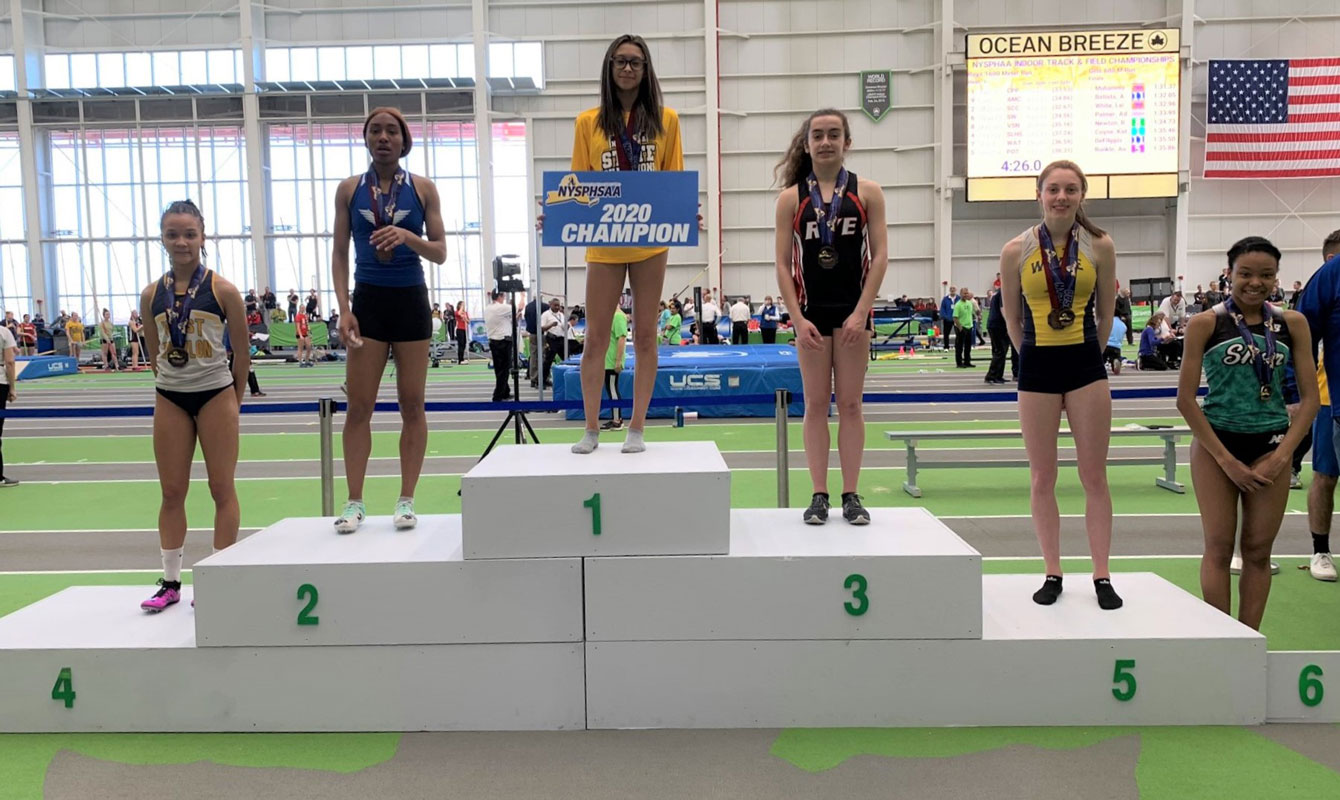