Jose Suarez graduated as one of the top musicians in Huntington High School’s Class of 2020. The exquisitely talented teenager is this year’s recipient of the coveted Woody Herman Jazz Award.

Mr. Suarez excelled in his studies across all academic disciplines, but he especially shined as a musician. A trumpet section leader in the Blue Devil marching band, he was even tapped to perform solos during high school concerts. 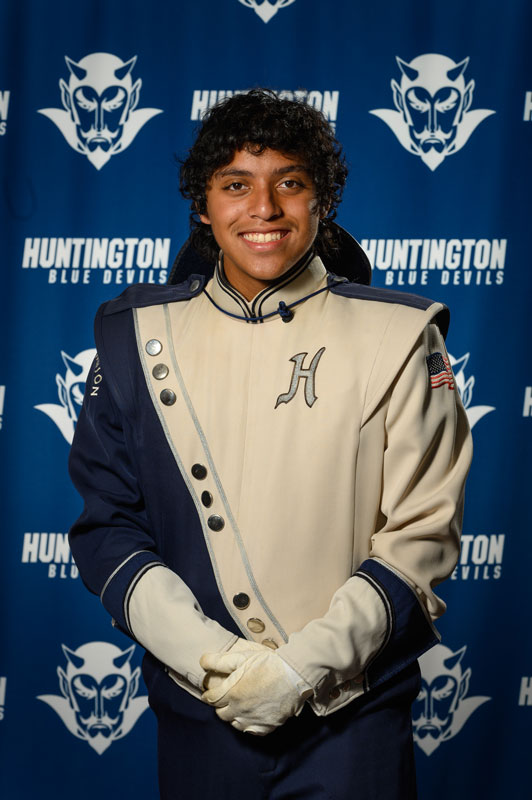 The teenager plays b-flat trumpet and c trumpet. In addition to the marching band, Mr. Suarez was chosen to perform with the high school’s jazz band, wind ensemble and pit orchestra.

Secretary of the high school band and corresponding secretary of Huntington’s Environmental Club, Mr. Suarez is headed to Syracuse University. He plans to study for a career as a high school music teacher and band leader.

“Motivation, music and guidance” from his teachers have been the keys to his success, Mr. Suarez said. Finding a balance between academic responsibilities and extracurricular activities have boosted his achievement in both areas.

The Woody Herman Jazz Award was created in 1988 following the death of Mr. Herman a year earlier. It is given to an outstanding graduating senior jazz band member “who has demonstrated dedication, loyalty, character and discipline to the jazz band program while achieving the highest musical standards required of instrumental music.”

Born in Milwaukee in 1913, Mr. Herman was a legendary saxophonist and clarinetist and the leader of one of the most popular jazz big bands. His music has been described as timeless and is still enjoyed today throughout the world.

“It was an honor to earn the Woody Herman Jazz Award,” Mr. Suarez said. “The last four years in the jazz program with Mr. [Jason] Giachetti were always special and enjoyable.”

An Advanced Placement Scholar with Distinction, Mr. Suarez was inducted in Huntington’s National Honor Society and Tri-M Music Honor Society chapters. He was named a Distinguished Senior in recognition of his superb academic record during every semester of high school.

“The Blue Devil marching band is definitely the most inclusive program I experienced at the high school and it acted as a second family within the school setting,” Mr. Suarez said. “I am grateful for the experiences with the marching band. The community should know how dedicated many of those involved are as well as how special it is to many of us.”