The actors who have graced Huntington High School’s stage these past four years have given their audiences everything they have and the results have been impressive. A talented group of seniors are exiting stage right after enchanting theatre-goers of all ages during fall dramatic productions and spring musicals. 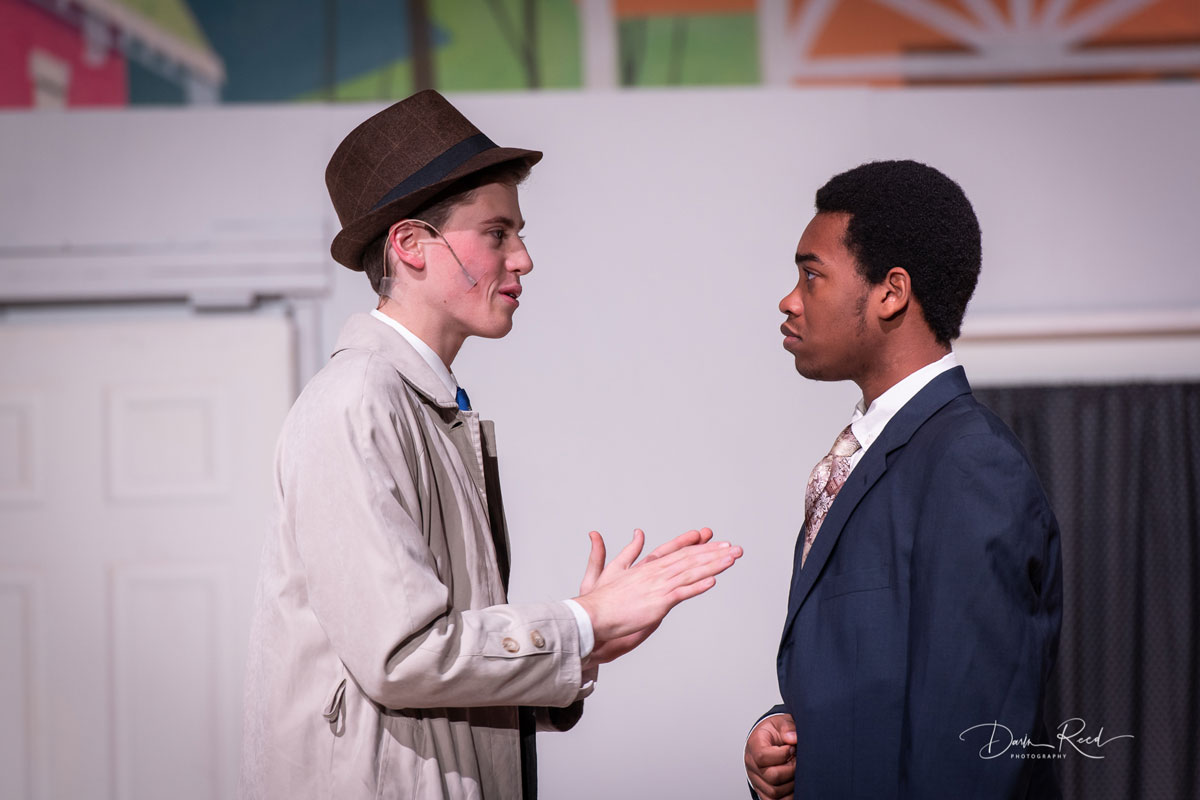 “As I look back on this group I felt these seniors needed to be honored for their dedication and service to the drama club,” Mr. Schwendemann said. “As they leave Huntington High School in order to pursue their dreams, whether that dream is performing or otherwise, my hope is that I taught them as much as they have taught me about education, perseverance, the theater and life. As a family we created not only memories, but created something together greater than ourselves; productions that not only meant something to us, but to our families and the school community. If you take the dedication, work ethic and joy you brought to the auditorium every afternoon to college with you I see nothing but success in each and every one of your futures.”

Huntington High School’s drama program was founded more than a century ago. Since then the club has entertained tens of thousands and produced well over a hundred plays. Now in its eleventh decade, the interest in an organized club devoted to acting and stage production has never been stronger.

“The Masque,” as Huntington’s drama club was known for many years, was first organized in the fall of 1928. “The original purpose of this organization was to develop individual talent in expression and artistic ability,” according to the 1931 edition of The Huntingtonian, the high school yearbook.

The early club was led by teacher Julia E. Vail, a graduate of Ithaca Conservatory. In addition to the study and practice of acting, Miss Vail held discussions on music, the art of make-up, book reviews and the merits of European and American theatres.

In 1929, months after being formed, the club invited the community to a three act comedy called “The Youngest.” At the time, the club had a policy of presenting a single play a year. In 1930 the production was the fantasy “Prunella.” “Both of these plays were received by the students and the townspeople with acclaim,” states the 1931 yearbook.

The Masque’s symbol was “an Oriental face cut into the semblance of a charm with the letters HHS across the top,” according to The Huntingtonian. Students qualified for the charm by participating in a play production or selling at least a dozen tickets to one.

About five dozen Masque members posed for the 1931 yearbook photograph on the front steps of the old high school on Main Street. It’s now town hall. More than 50 club members were photographed for the following year’s yearbook, this time posing on the steps alongside the colonnade then connecting the high school to the adjacent Main Street School. (The Main Street School was the smaller of the two buildings that now make up town hall. The colonnade has been replaced by a glassed-in hallway/reception area.)

The 1932 yearbook notes that year’s Masque production of “The Goose Hangs High” was “a great success.” The club continued to attract dozens of students each year. Plays were performed on the small stage in the old high school auditorium, the general area now comprising the town board meeting room.

There was a frequent turnover of faculty advisors during those early years. In 1936/37, teacher Virginia Lee Dyer, a graduate of Keuka College for Woman in upstate New York, led the club.

In 1937, about three dozen Masque members staged “I’ll Leave It To You” by Noel Coward. The club also produced a series of plays for student assembly programs throughout the year. According to the yearbook, Miss Dyer “encouraged student direction this year and because of this encouragement many of the members have directed assembly programs.”

The following year change came to Masque again. Teacher Grace Everest, a graduate of Brenau University in Georgia, assumed club leadership. The first production that year was a one-act play, “The Bathroom Door.” The big show for the year was delayed a couple of weeks. But, when the curtain finally went up on “Spring Dance,” the yearbook states it “was rated by many as the greatest Masque enterprise ever achieved.”

The 1938 edition of The Huntingtonian lays out some interesting details about how Masque operated. “Our meetings are held every other Thursday. Everyone has a good time, for as soon as all the business has been conducted the remainder of the time is given to entertainment. We have had musical renditions on the accordion, vocal selections and original skits. It has been agreed upon that the next major presentation will be a murder mystery. The membership has reached one hundred and many aspiring freshmen and sophomores had to be turned away as every Masque member must be at least a junior, according to the point system. For these would-be thespians, the Masque is sponsoring a one-act play, ‘Neighbors.’”

In September 1937 the Paint ‘N Powder club debuted. “The idea was conceived when many of the Masque members expressed an interest in stage make-up,” according to the yearbook. “Miss Everest consented to teach a special class for a period of four weeks. During this time we gained some practical knowledge of several different types [of] make-ups – ingénue, juvenile, old-age, Indian, clown and Oriental. We assisted with the make-up for the ‘Bathroom Door,’ ‘Spring Dance,’ ‘Neighbors,’ and a grade operetta at another school. Then we reorganized as a club and now meet every Tuesday to explore the fascinating field of stage make-up.”

Masque continued to stage plays to much fanfare. During the 1956/57 school year the production was “Sunday Costs Five Pesos.” The 1957 yearbook bluntly states: “Masque is an extremely important member of the dramatic family of our school. It deserves full credit and appreciation of the student body.”

Sometime after the old high school building on Main Street closed and the new one opened at the intersection of Oakwood and McKay roads, the club’s Masque name disappeared and was replaced by Thespian. Eventually, the leading performers were nominated for membership in the National Thespian Society, the honor group for drama participants. The top Thespians teamed up with other students to stage their own production each spring and they supervised the annual Play Festival.

In 1961 an offshoot of Thespian was “Drama Workshop” consisting of “a group of aspiring Thespians,” according to the yearbook. “They have spent a busy year not only learning about the drama but also being generally busy and helpful around the dramatics department.”

The Masque of yesteryear is now simply known as the drama club. It stages a pair of productions each year, including a spring musical. There are still plenty of students eager to challenge and express themselves as each role requires. There are still many who are eager to learn and perform the music necessary for certain productions and construct the sets, handle the lighting and the sound, create the costumes and attend to all the other little details that make a good show great.