Jake and Mary Jagoda were firmly rooted in the Huntington community; growing up here, carrying on active friendships and attending local schools. The siblings developed many close relationships with folks of all ages over the years.

When the brother and sister both lost their lives in the most terrible of possible circumstances it not only devastated their family, but their friends, classmates, teammates, teachers and coaches, too.

Following the twin tragedies, the Jagoda family created a scholarship that is awarded annually at Huntington High School in memory of Jake and Mary, who shared a special passion for living, learning and studying history.

Scholarship applicants must demonstrate academic excellence with an emphasis on history courses; indicate an intention to declare a college major in history or a related field; obtain the recommendation of a social studies teacher and submit a “History Is My Passion” essay.

The scholarship carries a $500 stipend. This marks the 17th year the Jagoda Scholarship Award has been presented to a Huntington High School senior.

This year’s recipient of the Jagoda scholarship is Daniela Weihskopf Escobar, a member of Huntington High School’s Class of 2020. The teenager is headed to Suffolk Community College in the fall. She plans to study for a career as a journalist.

A member of Huntington’s Social Studies Honor Society and Spanish Honor Society, Ms. Weihskopf is a lovely young woman. Her strong writing skills, sharp intellect, inquisitive nature and engaging personality make a career as a journalist a good fit for the teenager.

“The reason I want to pursue a career as a journalist is because I want to go around the world and find amazing stories that are going to educate, inform, uncover and expose the reality that our world is living,” Ms. Weihskopf said. “Just as history does, I want to present the facts in context. I would also like people to know the world culturally. There are many in different societies that cannot easily access it and so I would like them to have that opportunity to learn and understand about the different and wonderful cultures that exist.”

A huge fan of the History Channel, Jake Denis Jagoda attended elementary school in the Huntington School District and starred on the tennis team at J. Taylor Finley Junior High School before graduating from Chaminade High School in 1995.

Mr. Jagoda was killed in the terrorist attack on One World Trade Center on September 11, 2001 when hijackers flew an airplane into the north tower. He was 24 years old.

The ebullient Mr. Jagoda, who always seemed to have a twinkle in his eye, was in his second month of working as a trader on the 105th floor for TradeSpark, a subsidiary of Cantor Fitzgerald, one of the world’s premier financial services firms.

Known for his frequently dry sense of humor as well as a sensitive side, Mr. Jagoda loved the sea. He started fishing when he was four years old and was given his first boat when he was 12. He mastered all aspects of the water and fishing and began working on the James Joseph, a charter boat that sailed out of Huntington, when he was 13. When fishing season ended, he worked on a lobster boat. He could fly-fish, ice fish, deep-sea fish and trap lobsters. Classmates nicknamed him “Captain Jake.”

Following a stint studying at Jacksonville College, the articulate Mr. Jagoda earned his undergraduate degree in historical studies at SUNY Empire State College. After obtaining his college degree he worked as a tackle salesman during the week and on the James Joseph on weekends. When he saw the need to work a more “regular” job, a friend helped him land a position with Cantor Fitzgerald.

The Jagoda family was devastated again just two years later when Mary Jagoda presumably drowned while kayaking in the fog with a friend off Cape Cod in October 2003. She was 20 years old and in her junior year at Brandeis University, where she was studying American history and journalism. She had plans to study abroad in Glasgow, the largest city in Scotland.

A member of Huntington’s Class of 2001, the shy, dark-eyed Ms. Jagoda was initially on the Brandeis swimming and diving team before later deciding to play on the university’s field hockey squad.

During her years at Huntington High School, Ms. Jagoda earned strong grades and was very involved in the extracurricular club and athletic programs. She was a member of the National Honor Society and the National French Honor Society.

Jake and Mary Jagoda were very close. When Jake was killed on September 11, 2001 it hit Mary hard, but while she struggled to go on, she was still able to earn fine grades at Brandeis. She intended to dedicate her senior thesis to her brother. Following her freshman and sophomore years of college she enjoyed working during the summer months for an advertising agency in Manhattan

“Jake was my hero,” Mary Jagoda said in an online tribute. “He gave me my strength and my sense of humor. No one could tell a story like Jake. He had his timing perfected. He would hold out smiling until the perfect moment. There was always a punch line, but you never knew when it was coming, so I learned to listen carefully and constantly anticipate the joke. Often I would laugh too early, Jake would wait for the perfect moment and then slowly a sly grin would creep across his face. Usually I was on the floor laughing by then. I never could have imagined that such a gentle soul would die so early. Jake I miss you very much. I can only promise you that I won’t let your spirit or your laugh die with you. I’m working on the sly smile.”

Sadly, a third Jagoda sibling also passed away tragically. Louis Jagoda lived only 19 days in 1982. Parents Louis and Anna May Jagoda brought their second child home from the hospital in what they thought was good health, but a previously unknown kidney blockage claimed his life. 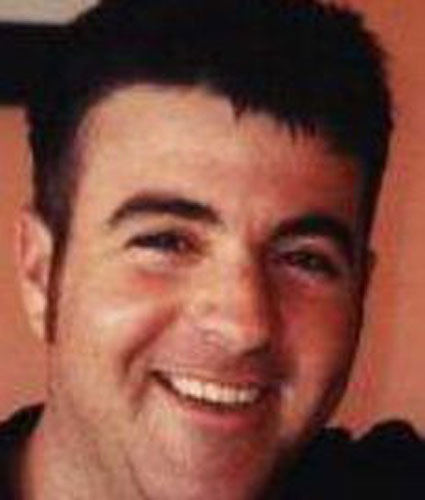 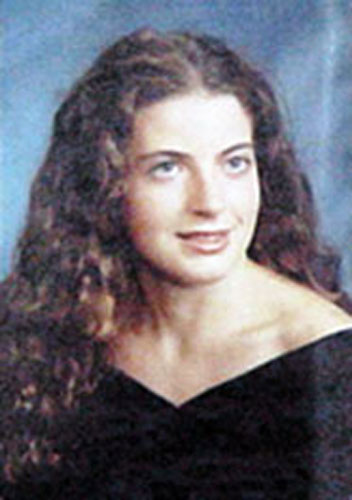 Mary Jagoda was a member of Huntington's Class of 2001. 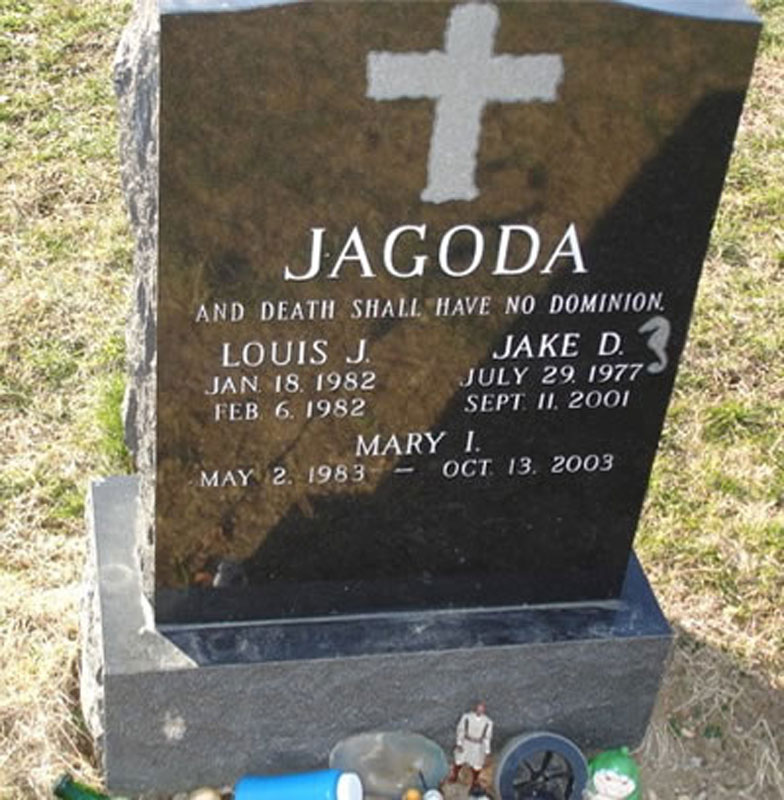 The Jagoda siblings are interred at St. Patrick's Cemetery.

Mary Jagoda was a member of Huntington's Class of 2001.

The Jagoda siblings are interred at St. Patrick's Cemetery.