Huntington took a commanding 14-3 lead after eight minutes and was ahead at halftime, 24-11. The two teams battled to a second half standoff, but Smithtown West (7-2) rallied several times to pull within striking distance only to have the Blue Devils respond. 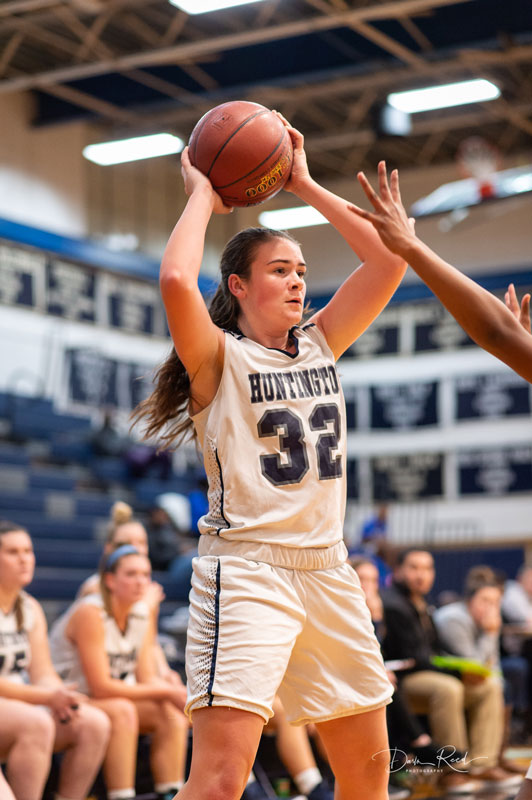 Plachta was sensational, tallying 21 points, 25 rebounds and seven assists to pace Huntington. “I think the key to winning was not changing our style of play during the game,” she said. “Playing as a team in high pressure situations definitely contributed a lot to our success.”

Byrnes played great in the second half, coming off the bench to help Huntington keep its edge. The senior scored 11 points, pulled down some key rebounds, had several steals and hustled after loose balls.

“I feel like the key was all five of the girls on the court throughout the game, no matter who, left it all on the court and never stopped outworking the other team until the game was over,” Byrnes said. “We worked as one and played passionately with great intensity.”

Abby Maichin also played well, scoring eight points. “We stayed composed and did what we knew how to do,” the senior said. “We have been working on developing an energy from girl 1-13 and today we really emphasized that. Our energy was a huge factor in our win today. Emily has been stepping up and has been playing amazing lately. She is bringing energy and confidence to this team, which is making us all play better as a whole. I’m so proud of her and this team and I can’t wait to see what the rest of this season has in store for us.”

“I think we really brought the energy today,” Forte said. “The past two practices we have worked really hard and we made one of our main focuses energy and we definitely accomplished that tonight. In order to succeed we set goals and sometimes ‘the little things’ is what it comes down to. Today we worked as a family and everyone contributed to the win in their own way.”

With the victory, Huntington improved to 3-1 in league play and 8-4 overall. The Blue Devils play a league game at Northport on Saturday at noon.