Griffin Kanzer and Nicholas Plachta are two high powered J. Taylor Finley Middle School seventh graders. They have always been outsized achievers, but neither has been resting on his laurels this year. Instead, the duo is reaching new heights.

The two friends teamed up to develop an exceptional group exhibit on the Manhattan Project for the National History Day initiative. Messrs. Kanzer and Plachta worked closely with Finley social studies Jarrad Richter, who serves as the Yorker Club’s faculty advisor. The club promotes the study of history and coordinates Finley’s participation in National History Day.

“Nick and I worked on an NHD exhibit last year when we were in the SEARCH program together and we placed second and got to Hofstra for regionals,” Mr. Kanzer said. “We are a good team and work well together so we decided to join the Yorker Club and do another project together this year. Mr. Richter helped us a lot.”

The duo’s project was titled, “The Manhattan Project: A Scientific Breakthrough, but at What Cost.” It was expected to vie for top honors in the group exhibit category of the junior division (grades 6-8) at the Long Island National History Day regionals, but the COVID-19 pandemic led to the event’s cancellation.

The Manhattan Project was the name given to the US effort to develop atomic weapons. It eventually grew to include 130,000 people working at 30 separate sites in the US, Canada and the United Kingdom. Major General Leslie Groves of the US Army Corps of Engineers directed the project. University of California theoretical physicist J. Robert Oppenheimer was the director of the Los Alamos Lab in New Mexico that designed the actual bombs.

The Finley research partners had an opportunity to interview Meyer Steinberg, a chemical engineer who worked on the Manhattan Project, which resulted in the atomic bombs that the United States dropped on Japan to end World War II.

“We chose our topic based on this year’s theme of Breaking Barriers in History,” Mr. Plachta said. “We thought the Manhattan Project was perfect because everyone knows the first time we used nuclear weapons was when America dropped atomic bombs on Japan, but we really explored all the different ways it changed history and how it was done.”

The US dropped the first atomic bomb on the Japanese city of Hiroshima on August 6, 1945 and the second on Nagasaki on August 9. Japan surrendered on August 15, 1945.

“We did research on the internet by looking at history websites and then we also found books about Oppenheimer and World War II,” Mr. Kanzer said.

The two atomic bombs completely obliterated their targets. It is believed that as many as 226,000 Japanese were killed either immediately or within four months from burns, injuries or radiation sickness.

“My neighbor is a scientist and he works with Mr. Meyer Steinberg’s son, so our neighbor was able to get us a phone interview,” Mr. Plachta said. “We knew he was one of the original chemical engineers on the Manhattan Project so we started more thoroughly researching his contributions to the project, made a list of questions and then called him. He is 95 years old now and living on Long Island. We couldn’t believe how articulate he was and how many details he remembered. Is was such an honor to speak with him.”

The Manhattan Project had its origins in an August 2, 1939 letter signed by Albert Einstein and sent to President Franklin D. Roosevelt. The letter explained that Nazi Germany was working on the development of an atomic bomb and it urged the US to start its own program.

“Once we were done with the interview and our research we made our exhibit, which includes short and long term impacts, old photographs and copies of historical documents, such as Einstein’s letter to FDR about the capability of the nuclear bomb,” Mr. Kanzer said. “It also includes quotes from historians and scientists. Nick also built a very cool Lego mushroom cloud to include in our display. He is awesome at building Legos. He built a Russian Gulag out of Legos for our project last year.”

Mr. Steinberg’s life story is simply fascinating. He earned a degree in chemical engineering at The Cooper Union for the Advancement of Science and Art in New York City before being drafted into the US Army and being assigned to the special engineer detachment at Oak Ridge National Lab in Tennessee. He worked on turning plutonium oxide into carbon tetrflouride. He was transferred to Los Alamos in 1945 to participate in the effort to produce plutonium for the atomic bombs. Following the war, he obtained an advanced engineering degree at Polytechnic Institute of Brooklyn. He joined the staff of Brookhaven National Lab in 1957 and became regarded as an expert in greenhouse gasses. Before he retired he held 38 patents and 500 credit scientific publications along with a book on the effects of CO2 and global warming, according to the Atomic Heritage Foundation.

Mr. Steinberg encouraged the Finley research partners to look at the US decision to build and use atomic weapons from the perspective of the American soldiers who would have participated in an invasion of a Japan.

“Our conclusion is that it was the right choice to drop the bombs even though we killed 200,000 people,” Mr. Kanzer said. “We concluded that dropping the bombs ended the war and actually saved more lives than the bombs killed. When we asked Mr. Steinberg, he agreed with that conclusion and was very proud of his work and his place in history.”

The two research partners worked many hours on their exhibit. “We are very happy and proud with how our project turned out and a little disappointed that we never got to display it because of the Covid-19 related cancellations,” Ms. Plachta said. “However, we are excited that we won first place in the group exhibit 6-8 category.”

The pair of seventh graders said Mr. Steinberg helped them explore ideas for their exhibit and that without him their project would not have been the same.

Messrs. Kanzer and Plachta learned an awful lot along the way. They also reflected on what some consider to be the madness of nuclear weapons.

“We found a cool quote from Albert Einstein who said: ‘Humans invented a nuclear bomb, but mice would never invent a mousetrap,’” Mr. Plachta said. 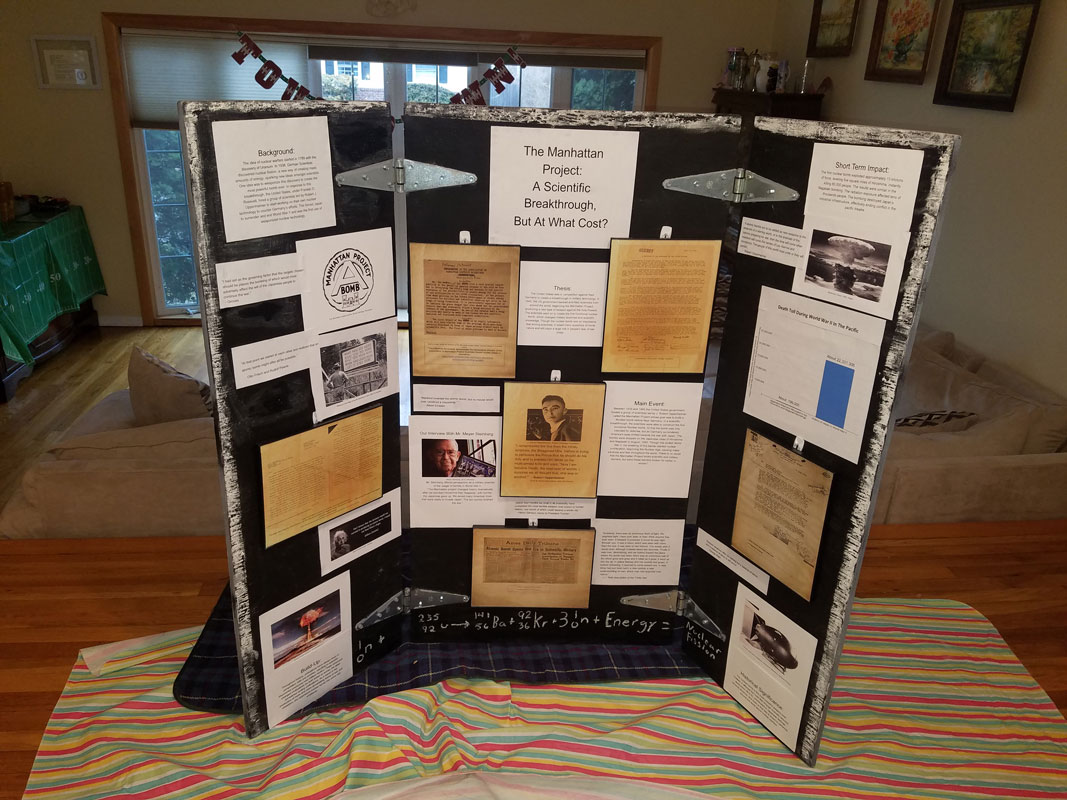 The two seventh graders developed an exceptional group exhibit on the Manhattan Project.

The city of Nagasaki was destroyed by the atomic bomb in August 1945.

The two seventh graders developed an exceptional group exhibit on the Manhattan Project.

The city of Nagasaki was destroyed by the atomic bomb in August 1945.