On a snowy early December day, Huntington High School art teachers Kristin Singer and Kasmira Mohanty headed out to Suffolk’s South Fork with a group of talented teenager artists. It was a day they will always remember.

On a snowy early December day, Huntington High School art teachers Kristin Singer and Kasmira Mohanty headed out to Suffolk’s South Fork with a group of talented teenager artists. It was a day they will always remember.

Their first stop was at the Southampton Arts Center. The venue is currently hosting an immense, first of its kind dual exhibition titled “Solar Impressions and International Masters/ Collaborations in Printmaking.”

The exhibitions are the brainchildren of Sag Harbor artist and master printmaker Dan Welden, who met the Huntington teachers and students at the exhibition to show them around.

The “Solar Impressions” juried exhibition has 113 pieces that were selected from more than 720 entries from across the United States, Ireland, Israel, England, Denmark, Australia, New Zealand, Peru, Canada, Spain and France. The esteemed jury consisted of Laura Einstein, manager of the Mezzanine Gallery at the Metropolitan Museum of Art; Alex Ferrone, owner/director of the Alex Ferrone Gallery in Cutchogue, NY; and Ron Pokrasso, Santa Fe artist and world printmaking traveler.

The awards juror, acclaimed international artist Eric Fischl, presented 40 individual awards, including one to Ms. Mohanty, who came in eighth place. She has been teaching digital arts at Huntington High School since 2001.

Bursting with inspiration, the artsy travelers headed to Dan Welden’s studio in Sag Harbor to work with the master himself.

“Dan Welden is an innovator at the forefront of the alternative health and safety-oriented printmaking and the originator of the technique called Solarplate,” Ms. Mohanty said. “He co-authored the quintessential comprehensive manual of Solarplate methods, ‘Printmaking in the Sun’ with Pauline Muir.”

For the uninitiated, Solarplate etching is a non-toxic alternative to etching with acid that utilizes a photosensitive emulsion on a metal plate. “The artist draws onto a transparent film which is then laid over the plate and exposed to light, activating the photo sensitized emulsion,” Ms. Mohanty said. “The plate is then washed and these areas drawn on dissolve, leaving behind furrows with exact fidelity to the artist’s drawing. It is then inked and printed like a traditional etching. Solarplate offers an expanded range of techniques and aesthetic versatility without the toxicity of etching with acid and solvents.”

The Huntington contingent ate up everything that Mr. Welden dished out. “Dan gave the students his full attention and offered several pieces of artistic advice and encouragement,” Ms. Mohanty said. “He walked them through the entire Solarplate process, resulting in a finished print by each student. The students were delighted with the unanticipated mood and richness of the prints. Some of the prints demonstrate different illustration and inking techniques.”

In addition to the “amazing” experience of getting to work with a master printmaker in his studio, the visitors were invited to eat their lunch in his home above the studio and were also treated to view a portfolio and discussion of his own work. The students really enjoyed their time with Mr. Welden and found him really fun, inspirational and pleasant to work with.

“Many of the students plan on extending their experience back at school by creating new plates and experimenting with the one they made with Dan,” Ms. Mohanty said. “We look forward to seeing some of those creations at the district art show.”

The exhibition at the Southampton Arts Center runs until December 29. Dan Welden also has work hanging at the Parrish Art Museum through February 23 as part of the “Artists Choose Artists” exhibition. 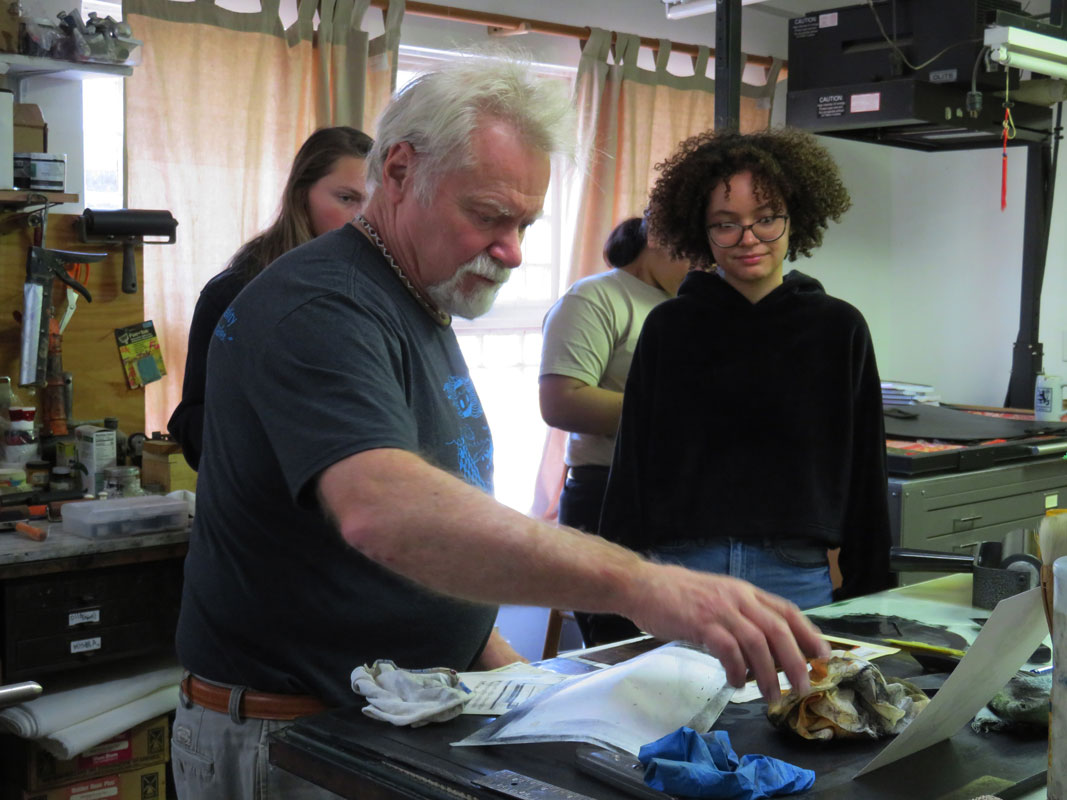 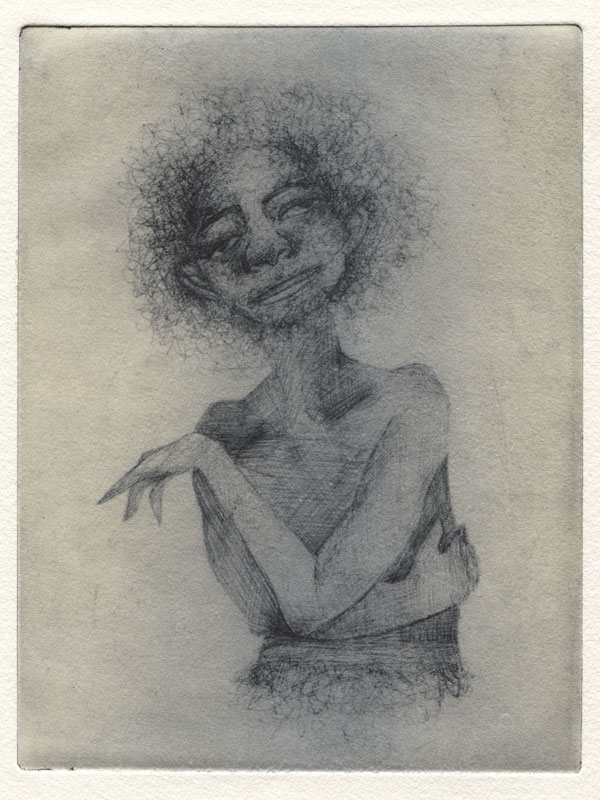 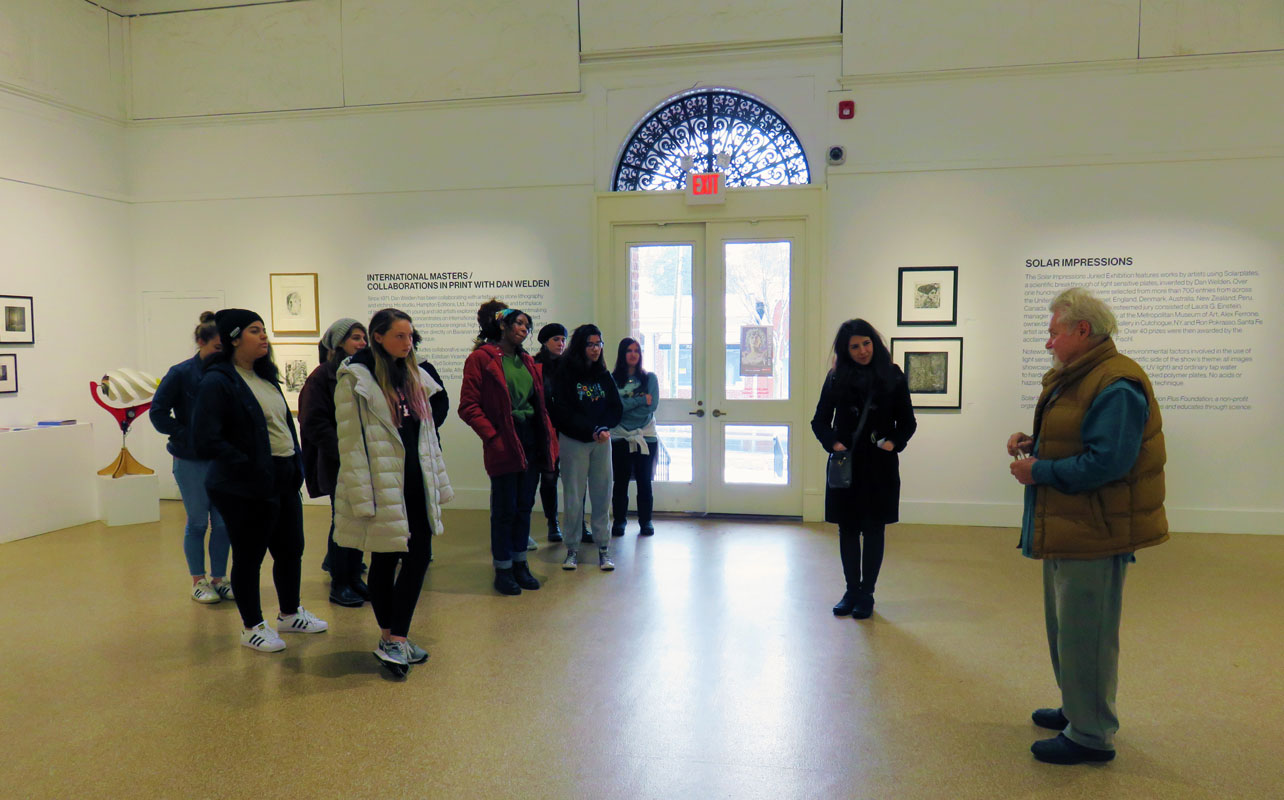